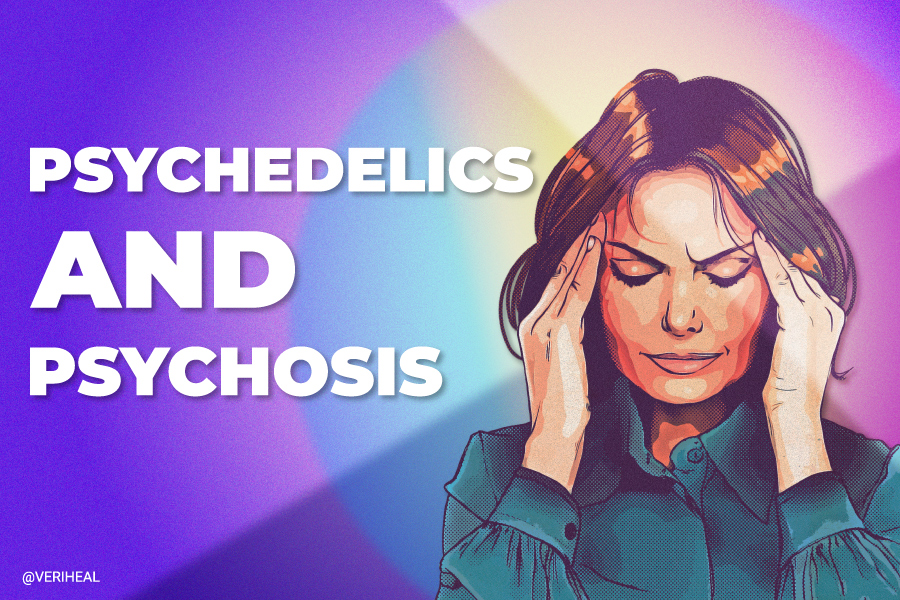 New Research Published on Serotonergic Psychedelic Use and Psychosis

This new research was published in the Scientific Reports journal and was conducted by a Swedish team of 14 researchers. Psychedelics have been receiving an increasing amount of interest for their therapeutic potential. However, the research available on their potential adverse effects is just as scarce.

The research team under the leadership of Alexander V. Lebedev, wanted to assess the potential psychotic reactions in young, healthy people as a result of psychedelic use. Researchers conducted a survey with 1,032 Swedish adults, 701 of whom were between 18 and 25 years of age and had no history of brain trauma or psychiatric diagnoses.

It must be made clear that the research is based on serotonergic psychedelics. This class of psychedelics are psychoactive substances that have effects on mood and higher-order cognition.

Swedish Study Focused on Potential Harms Associated With Psychedelic Use

According to the study, the modern era is in a “psychedelic renaissance” since we are “witnessing an intensification of basic neuroscientific and clinical research of these drugs, showing promising, although preliminary, results for various psychiatric conditions.” However, many are hesitant to consider these psychedelics for psychiatric conditions since they are associated with symptoms of psychosis. The team explains that despite the many claims of that associated, “few studies have focused on potential harms associated with abuse of these substances.”

In terms of potential psychotic conditions, schizophrenia is a common concern  since that condition can make one “interpret reality abnormally.” Considering the prominent concern of presenting with schizophrenia as a result of drug-induced psychosis, the researchers included a measure of schizotypy in the questionnaire—which assesses whether any of the participants have schizophrenia-like characteristics. Measures of schizotypy identify characteristics like disorganized thinking and paranoia.

Their study was approved by the Swedish Ethical Board and the researchers obtained informed consent from every participant. The team made use of a randomly drawn group of psychedelic users without history of psychiatric disorders as well as non-users who met the aforementioned criteria.

“Despite the fact that the first studies (n = 2588) did find a link between psychedelic use and psychosis-like symptoms, larger studies (n > 130,000) failed to confirm this,” explained the researchers. The study explains that one potential reason for the discrepancies between the two groups of studies may be that “different strategies were used to assess psychopathology.”

After the initial questionnaire, the researchers sent out an additional survey to a sample of 197 people in order to examine the drug use patterns. They found that there was no evidence of heightened schizotypy when it came to those who had greater exposure to psychedelics. Drugs like cocaine or amphetamines were found to be significant predictors of higher schizotypy results. This indicated an increased likelihood of presenting with psychosis among users of stimulant drugs such as these.

Potential Benefits of Psychedelic Medicine: What Did the Study Find?

In order to get a better understanding behind the causal effects, the researchers conducted a behavioral study made up of 22 psychedelic users and 17 non-users. The participants of this portion of their study had to complete a task in order to measure Bias Against Disconfirmatory Evidence (BADE). BADE is explained to be a common cognitive bias among the schizophrenia spectrum.

The researchers found that psychedelic users were more likely to have lower Evidence Integration Impairment scores—which assessed one’s “lack of ability to modify beliefs when facing new information.” This means that the psychedelic users were more likely to modify beliefs when presented with new information when compared to those who consume stimulant drugs. Researchers explained that these results offered support for “the rationale of psychedelic-assisted therapy for non-psychotic psychiatric conditions characterized by overly fixed cognitive styles, such as, for example, depression.”

Participants then completed a task intended to measure their response to fear. In this task, the researchers found that those who have greater exposure to psychedelics had greater flexibility of fear learning, since they showed a higher sensitivity to instructed knowledge. The researchers noted that this suggests psychedelics “can augment top-down fear learning in a lasting way, which in turn, may explain their particular efficacy in treating anxiety and trauma-related psychiatric disorders.”

The study addressed the multidimensionality of schizotypy and their results “yielded associations (that) were in line with the main result showing no significant associations between psychedelic use and schizotypy when adjusted for concomitant drug use, psychiatric diagnosis and demographics.”

Findings Suggest a Weak Relation Between Psychosis and Psychedelics

Although the study did not find a direct correlation between whether psychedelics do or don’t lead to the presentation of psychosis, they did find that the connection is weak and that there are actually many benefits associated with psychedelic use. Drug-induced psychosis was mainly linked to stimulant drugs like cocaine and amphetamines.

The researchers stated that “Our analyses did not support the hypothesis that psychedelics may pose serious risks for developing psychotic symptoms in healthy young adults,” and that “the lack of a strong relation between use of psychedelics and psychosis-associated symptoms does not preclude that such drugs are detrimental for individuals with a high risk of developing psychotic disorders—an important question that needs to be investigated in future studies.”

Consumers need to understand that psychedelics are still illegal substances, and although this new research finds a weak relation between psychosis as a result of psychedelic use, it does not mean that one should not be cautious. As they noted, there are not enough studies available on their adverse effects of psychedelic use—even if one does not include the risk of psychosis as one of those adverse effects. If you want to consider psychedelic therapy make sure to do so in a legal environment and with professionals who have experience and training in psychedelic assisted therapy.

Note: Veriheal does not support illegally consuming therapeutic substances such as psilocybin, MDMA, LSD, etc. but acknowledges that it transpires because of the current illicit status, which we strive to change by advocating for research, legal access, and responsible consumption. Always consult a physician before attempting alternative therapies.