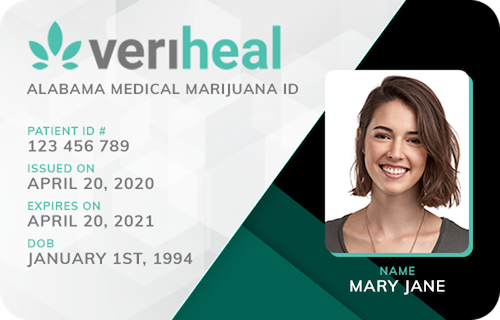 Meet With a Medical Marijuana Doctor in Alabama

It looks like we are not currently helping patients in Alabama to get their medical marijuana cards. However, you can easily join our waitlist to be notified when we're booking appointments in your state.

You can also take advantage of our Personalized Consults as an Alabama resident to better understand how cannabis and CBD may be helpful to you.

How to Get a Medical Marijuana Card in AL

Consult with a doctor for 10-15 minutes to evaluate your ailments and ask any questions you may have about medical marijuana treatment. You will likely need proof that you have tried traditional treatments before requesting medical cannabis treatment or documentation that cannabis is a front-line treatment for your medical condition. This is an important piece of qualifying for a medical marijuana certification in Alabama.

After the appointment is complete and if you are approved, the doctor will fill out a recommendation form for medical marijuana. Once you have this, you can then apply to the state.

Once you are approved, you’ll register with Alabama by submitting an application and paying an application fee up to $65. The state will process your application, notify you of your approval, and mail your card. Once you have your card in hand, you can begin purchasing from dispensaries.

In Alabama, patients will need to recertify their license annually by seeing a licensed physician again. Veriheal will get in touch with you when your certification is approaching its expiration to help you set up a renewal consultation.

The Status of Cannabis Legalization in Alabama

Despite its long and tumultuous relationship with strict cannabis possession laws, Gov. Kay Ivey signed SB 46 into law on May 17, 2021, legalizing medical marijuana in Alabama. SB 46, otherwise known as the Act, has made Alabama the 37th state to approve the use of medical cannabis. It passed recently in the Alabama House of Representatives, after passing the Senate in February 2021, and underwent some initial amendments to the law before it was signed.

The Darren Wesley “Ato” Hall Compassion Act is named after the son of State Rep. Laura Hall, who passed away from AIDS and inspired the medical marijuana law. The Alabama Medical Cannabis Patient Registry established by this law will keep track of doctor certifications, patient registration, and medical card information, as well as dosages and types of medical cannabis recommended by the prescribing doctors. It will also track dates of purchases and amounts of products a patient purchases from dispensaries.

The Act has also created the Alabama Medical Cannabis Commission in order to regulate, license, and oversee the production of medical cannabis. The commission will consist of 14 members who will be appointed by the governor and other Alabama legislators and are subject to the state Senate for confirmation. The commissioned members will not be public officials, candidates for public office, lobbyists, or public employees. Instead, they will have certain professional backgrounds, such as being in agriculture, medicine, and pharmacy. They will also be unable to have any financial interest in medical cannabis-related companies.

Patients will be allowed to have a medical cannabis certification for up to 12 months when it will need to be renewed if it is still needed. The 9% tax revenue from medical cannabis sales will go towards regulating the medical marijuana program, and any excess revenue will go towards the state’s general fund and a new Medical Cannabis Research Fund.

In addition, Birmingham Mayor Randall L. Woodfin issued a blanket pardon for more than 15,000 closed marijuana convictions dating between 1990 to 2020.

Though cannabis possession is still illegal and is a chargeable offense, the Alabama Senate just passed a marijuana decriminalization bill on March 3, 2021. This bill has not been completely signed into law as it still needs to be voted on in the Alabama House and signed into law by Gov. Ivey. It is, however, a very promising bill for the residents of Alabama.

When the decriminalization bill is fully passed, people with past cannabis possession convictions will be able to petition the courts to have their records expunged of the charges. This law would make it so that you can only be fined $250 if you possess two ounces or more of cannabis for the first offense. You will receive a $500 fine for the second offense and $750 fine for the third. Thankfully there will no longer be a threat of jail time for marijuana possession in Alabama.

Patients can get certification for a medical cannabis card in Alabama for the conditions below. However, it is important to note that medical marijuana should not be used as the first option to treat these conditions and is available to patients after there is documentation that traditional therapies have been tried, or if the initial medical treatment indicates that medical cannabis use is the standard for care.

Caregivers are allowed in the state of Alabama, with patients’ loved ones allowed to pick up their prescription on their behalf. Caregivers must be 21-years-old or older and is the parent, legal guardian, or caregiver of a registered minor. Patients under the age of 19 must have their caregiver pick up their prescriptions. Cultivation is illegal in Alabama for both medical and recreational purposes. If found growing cannabis, criminal charges and fines are possible.

Additionally, the state is not presently issuing any type of business license to cultivate cannabis at this time. Still in its infancy, medical cannabis legalization in Alabama will take time to grow, but in the meanwhile, thousands of citizens now have safe and legal access to medical cannabis, which conclusively eases certain conditions in Alabama.

Possession and Cultivation in Alabama

Once the Darren Wesley “Ato” Hall Compassion Act is fully established and medical cannabis is available, you will be able to buy up to 60 daily doses at a time and have up to 70 doses in your possession. Daily dosages will be initially capped at 50 milligrams of Δ9-tetrahydrocannabinol (THC) and can be raised up to 75 milligrams for patients after 90 days of being a part of the medical marijuana program. Patients with terminal illnesses may be able to receive over 75 milligrams of THC, but they would have to have their driver’s licenses suspended while receiving it.

As the regulatory commission gets established, the daily dosages available to patients may be dependent on the qualifying medical condition they have. Minors who qualify for medical cannabis will be unable to use products that have more than 3% THC.

Once medical marijuana is available for purchase in Alabama, you will be able to purchase cannabis tablets, capsules, tinctures, or gel cubes for oral use. Gels, oils, transdermal patches, topicals, nebulizers, and liquids or oils will also be available for use in an inhaler. You will be unable to receive parts of the cannabis plant and products that can be smoked or vaped as well as edibles.

Alabama already has a formal CBD oil program under Len’s Law, which is legislation that was passed in 2019 to legalize CBD oil containing up to 3 mg of THC. To register for the CBD program, all applications must be submitted to the University of Alabama Birmingham Neurology Department.

To receive a medical license for CBD, a patient must prove they are a resident of Alabama and have a physician’s referral letter based on a qualifying condition. CBD oil costs vary depending on the type and dosage, which can only be sold to those who are a part of the CBD oil program.

Is Marijuana legal in Alabama?

Marijuana is currently not legal in Alabama. Once the medical cannabis program has been established, it will be legal for medicinal purposes only, with those holding an Alabama cannabis license or certified patients allowed possession.

Are employers required to allow their employees to use medical cannabis?

The only place to safely consume cannabis is in a private residence even if you hold a medical marijuana license.

When will medical marijuana cards be available in Alabama?

Though there has not been a clear date set for patients to apply for medical cannabis cards, entities and people who are interested in growing, processing, or operating a dispensary can begin applying on September 1, 2022.

Where is it safe to Purchase?

Medical marijuana products will be available at licensed dispensaries. The Alabama Medical Cannabis Commission plans on initially issuing dispensary licenses to up to 4 companies who would be allowed three dispensaries, each in different counties. They will also issue integrated facility licenses to a maximum of five companies that could have a maximum of 5 dispensary sites. Currently, the legislation will allow up to 27 locations where you will be able to get medical cannabis products.

Will medical cannabis be covered by insurance?

No. Insurance plans will not be required to cover the costs of medical cannabis products.

Can I get my medical card if I’m not an Alabama resident?

Once the medical marijuana program is operating, you must be an Alabama resident in order to qualify and you must be 19 or older. If you are under the age of 18, you will need an adult to register as your caregiver.

Places to Visit in Alabama After Enjoying Your Medicine

History and culture make up the Yellowhammer State, the southwestern U.S. region where locals love to enjoy nature while watching rockets shoot to the moon. Home to southern Alabama's Cheaha State Park or Huntsville's U.S. Space and Rocket Center, the state has endless possibilities to explore. While Alabama has not legalized medical cannabis yet, we have faith it will follow suit with the other 33 states, giving relief to those who can truly benefit from the prescription, and when it does there will be dispensaries throughout the state. That is why Veriheal chooses spots where it would be delightful to drop in while picking up prescriptions. We here at Veriheal believe the journey to your wellness should be the best possible experience. Read on to find some sweet spots to stop in Alabama that are ready for your visit.

Some other great spots to chill and enjoy the impressive scenery are the Montgomery or Birmingham Zoo, where animals of all sizes and colors live comfortably among the lush landscape. If feeling bold, go-karts, arcade games, and miniature gold await at Adventure Land, a great place to spend the afternoon. Lastly, if the season is right, Alabama offers great Splash Adventure, a water-themed amusement park to cool off in after a drive in the car. While Alabama continues its formal CBD program and sees more and more states approve medical licenses for the dozens of qualifying conditions, surely the Yellowhammer State will do what’s best for citizens who can benefit from medical cannabis.