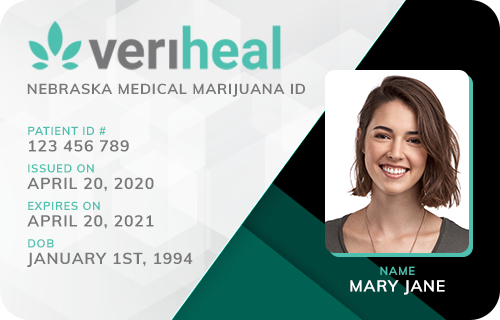 Meet With a Medical Marijuana Doctor in Nebraska

It looks like we are not currently helping patients in Nebraska to get their medical marijuana cards. However, you can easily join our waitlist to be notified when we're booking appointments in your state.

You can also take advantage of our Personalized Consults as a Nebraska resident to better understand how cannabis and CBD may be helpful to you.

How to Get a Medical Marijuana Card in NE

The next step is to fill out the application for the state medical cannabis program in Nebraska. If your application passes state review, they will mail you your card. Once you have your card in hand, you can begin purchasing from dispensaries.

In Nebraska, patients will need to re-certify their card annually by seeing a licensed physician again. Veriheal will get in touch with you when your certification is approaching its expiration to help you setup a renewal consultation.

The Status of Cannabis Legalization in NE

Both medical and recreational marijuana are illegal in Nebraska. According to the Marijuana Policy Project, 77% of Nebraskans surveyed said they supported legalization of medical cannabis. In 2015, the Cannabis Compassion and Care Act would have allowed certain patients with a physician’s recommendation to use marijuana in liquid or pill form for medical purposes only. The bill passed, but unfortunately, it was blocked and opposed by Gov. Pete Ricketts and Attorney General Doug Peterson. Later in 2018, efforts to bring an initiative to decriminalize marijuana in Nebraska to the ballot failed.

Whether or not medical marijuana legalization will appear on the November 2020 ballot remains a question for the Cornhusker State; meanwhile, some Nebraska officials still do not support legalizing it. For example, a sheriff from Lancaster County is attempting to keep the matter off of the November General Election ballot, talking it to the Supreme Court.

Nebraskans for Medical Marijuana, a political committee supporting legal medical cannabis for qualifying patients, garnered more signatures to see the question placed on the ballot only to have higher officials, including Gov. Pete Ricketts, try to knock it off.

“In spite of efforts to legalize marijuana for recreational or medicinal use in other states, marijuana remains a federally banned controlled substance whose medicinal value has not been tested,” according to Rickett’s speech recently published on the state government website.

“While parents and advocates have made their case at the state level here in Nebraska and elsewhere for marijuana’s medical use, our country already has a process in place through the Food and Drug Administration (FDA) to determine whether a drug constitutes safe and effective medical treatment,” he added.

Veriheal will follow all November 2020 General Election results closely, reporting on the regions that make changes to both medicinal and recreational cannabis laws across the country.

There are no qualifying conditions in Nebraska and no medical program in the state.

Without a designated statewide program, there are no caregiver laws set up in Wisconsin for assisting patients with medical cannabis.

There are no definitive possession laws regarding medical cannabis since the state of Nebraska does not have a program.

Does Nebraska refer me to certified medical cannabis physicians?

No, the state does not offer any physician referrals, which is why Veriheal will set up shop in Nebraska when the state approves a medical cannabis program.

Places to Visit in NE After Enjoying Your Medicine

The Cornhusker state boasts Sunken Gardens, the Old Market, and the renowned Bob Kerrey Pedestrian Bridge, not to mention Omaha's Botanical Center at Lauritzen Gardens. The midwestern state has a few metropolitan areas, including Omaha, Lincoln, and Nebraska City. Other popular cities include Sidney and Gothenburg, both filled with Nebraskan history and culture. The Strategic Air and Space Museum in Ashland is where locals and visitors alike gather to have an out of this world experience. The Chimney Rock National Historic Site is one of Nebraska's most breathtaking regions and home to a pioneer landmark standing high in the sky. Scotts Bluff National Monument is a landscape of cliffs and valleys many like to explore while other Nebraskans spend time at Indian Cave State Park. When Nebraska does pass a medical cannabis program and sets up dispensaries statewide, surely a detour on the way to a dispensary is worth it to any of the below best places.

A touch of England right in midwest is seen at Carhenge, a unique likeness to the European prehistoric monument, but made with cars instead of rocks. Up to 39 vehicles create the fence and the free attraction is frequented all year long. The site is adjacent to the charming Nebraska town of Alliance, where many gather at the central park fountain that flows under blue light. Dobby’s Frontier Town, similar to an old western town, is another area attraction to see when visiting Carhenge.

The Cowboy Trail is where many locals and visitors bike or horseback 195 miles along Nebraska’s back roads. The longest U.S. rail-to-trail provides hours of fun. Running from Valentine to Norfolk, the Cowboy Trail offers an up close, and sometimes scary, glimpse of Mother Nature above the trees. Located in Cherry County, visiting the trail makes for a great weekend getaway with plenty of things to do in Nebraska.

On the Missouri River banks, Indian Cave State Park offers backpacking and an array of wilderness adventure activities. A boat ramp makes it possible to enjoy the water, adding skiing and fishing to the long list of things to do. Scenic driving routes and hiking trails give visitors many opportunities to see sections of the 3,400-acre park. Most famous for its deep caves and stairways, the park is also perfect for wildlife watching. With camping grounds on site and nearby lodging, most who visit the area stay overnight to stargaze at the end of an adventurous day in the park.