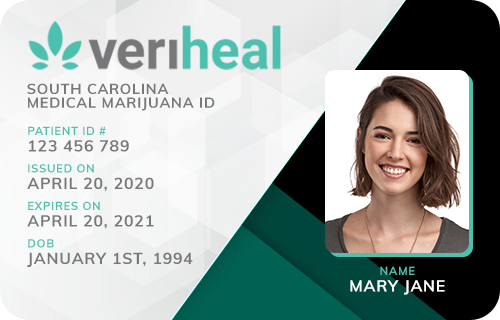 Meet With a Medical Marijuana Doctor in South Carolina

It looks like we are not currently helping patients in South Carolina to get their medical marijuana cards. However, you can easily join our waitlist to be notified when we're booking appointments in your state.

You can also take advantage of our Personalized Consults as a South Carolina resident to better understand how cannabis and CBD may be helpful to you.

How to Get a Medical Marijuana Card in SC

Consult with a doctor for 10-15 minutes to evaluate your ailments, and ask any questions you may have about medical marijuana treatment. After the appointment is complete, the doctor will fill out a recommendation form for medical marijuana. Once you have this you can then apply to the state.

In South Carolina, patients will need to re-certify their license annually by seeing a licensed physician again. Veriheal will get in touch with you when your certification is approaching its expiration to help you setup a renewal consultation.

The Status of Cannabis Legalization in SC

South Carolina has a limited medical cannabis program, only permitting patients to have low-level THC oil to relieve major epileptic disorders, including Lennox-Gastaut or Dravet syndrome, or any other condition a state-certified doctor deems unresponsive to conventional medication.

The program is so limited that Americans for Safe Access (AS) gives the Palmetto State an F overall. Along with patient rights and civil protections, access to medicine and functionality all fail for the statewide program adopted in 2014, known as Julian’s Law. Moving forward, the ASA has some concrete suggestions for South Carolina, which tabled all medical cannabis talks due to COVID-19.

“ASA a return to consideration of a comprehensive medical access program to serve state patients. When adopting such a program, the state should include a system for in-state production and distribution, as well as civil discrimination protections for patients. That state should also seek to expand the list of qualifying conditions and develop strict product safety standards.”

A local ABC news station reported in January 2020 that a Benchmark Research Poll showed that up to 76% of South Carolina citizens support legalizing cannabis altogether, nevertheless just medicinally. Though the percentage is substantial, State Attorney General Alan Wilson’s opposition is stronger, keeping recreational cannabis use totally off the table for now.

South Carolina has no list of qualifying conditions that make residents eligible for a medical cannabis, which is only permitted in the form of low-level THC oil; rather, the state only permits severe epileptic disorders including Lennox-Gastaut or Dravet syndrome as a considerable disorder. The state does allow state-certified doctors to approve any other condition that may in fact not respond to any other type of conventional therapy.

When South Carolina does expand its limited medical cannabis laws and actually consider recreational use, Veriheal will be the first to report how Palmetto State citizens can apply and be approved for the very needed relief the flower provides for dozens of disorders.

The only qualifying condition for non-psychoactive CBD-oil is a seizure disorder including Lennox-Gastaut or Dravet syndrome and epilepsy.

Without a designated statewide program, there are no caregiver laws for assisting patients with medical cannabis set up in South Carolina.

There are no definitive possession laws regarding medical cannabis since the state does not have a program.

Does South Carolina refer me to certified medical cannabis physicians?

No, the state does not offer any physician referrals, which is why Veriheal will set up shop in South Carolina when the state approves a medical cannabis program.

Veriheal can help you set up an appointment with a registered physician once the state approves a program. After meeting with a certified doctor in a virtual video consultation from the comfort of your own home, the doctor will determine your eligibility based on a qualifying condition.

Places to Visit in South Carolina After Enjoying Your Medicine

Southern charm, plantations, and Myrtle Beach are three prime examples of South Carolina, the southeastern state with a sister to the north. Beginning with Charleston's Historic District, a community of 1400 historic homes and buildings, locals and tourists alike get a taste of the past with carriage rides on cobblestone streets. After touring old school South Carolina, many find spending time on the Atlantic Coast seashores and shopping at the Palmetto State's most prominent outlet and biggest entertainment venues. Less sandy, but just as scenic, the plantations filled with Angel Oak trees are where many spend their time in South Carolina. When the state does pass a medical cannabis program, traveling to statewide dispensaries will open many opportunities to visit any of the below best places in the southern state.

Whether watching dolphins or whales on a day-long cruise, sailing, jet-skiing, or kayaking, Hilton Head Island has as much fun in the water as out. Shelter Cove Towne Centre is where many like to gather when not hanging out at Jarvis Creek or Islanders Beach Parks. Bike trails around the island make it possible to exercise while enjoying the scenery. The Coastal Discovery Museum is also a great place to visit along with Pinckney Island National Wildlife Refuge. Needless to say, getting stranded on this island wouldn't be such a bad thing.

Walking through Brookgreen Gardens or touring Atalaya Castle are just some of the ways to soak up fun in Huntington Beach State Park. The Murrells Inlet Marsh Walk brings locals and visitors far out onto the water, turning a simple sunset into an excellent experience. The Kerrigan Natura Trail also takes you through the South Carolina park, giving glimpses of Mother Nature up close and personal. Other popular park spots include Morse Park Landing and Drunken Jack Island.

Sightseeing carriage and walking tours make it easy to get around Charleston’s Historic District, rich with pastime culture. McLean Plantation Site, a gorgeous estate, may be as beautiful as Magnolia Plantation, which is why seeing both is a must when in town. Fort Sumter National Monument is also nearby, giving visitors a chance to see the famous citadel. While some enjoy the beauty of Battery & White Point Gardens, other visitors find thrills at the Old Exchange & Provost Dungeon.