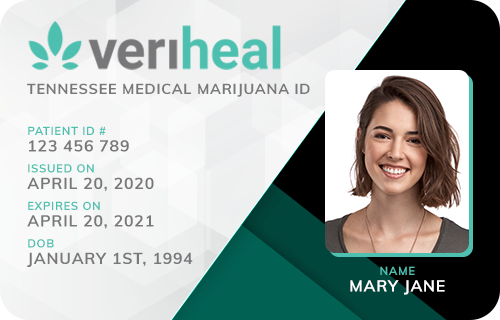 Meet With a Medical Marijuana Doctor in Tennessee

It looks like we are not currently helping patients in Tennessee to get their medical marijuana cards. However, you can easily join our waitlist to be notified when we're booking appointments in your state.

You can also take advantage of our Personalized Consults as a Tennessee resident to better understand how cannabis and CBD may be helpful to you.

How to Get a Medical Marijuana Card in TN

In Tennessee, patients will need to re-certify their license annually by seeing a licensed physician again. Veriheal will get in touch with you when your certification is approaching its expiration to help you setup a renewal consultation.

The Status of Cannabis Legalization in TN

What is one of the most limited U.S. medical cannabis programs in Tennessee could change soon. A March 2020 news report detailed how the Volunteer State is considering legalizing oils, tinctures, and lotions, much more than patients are offered now. Tennessean.com reports that Rep. Bryan Terry and Sen. Steve Dickerson, both doctors, proposed the pending legislation that would completely revamp the strictly limited statewide program.

“I don’t believe our legislators want patients to be in jail. They want there to be a safe manner with which they can get these medicines,” Terry told the statewide news source. “And, outside the General Assembly is the public, and the public overwhelmingly supports using these chemicals in a medical fashion.”

If passed, the law would permit residents who suffer from a small list of conditions, including cancer, PTSD, and HIV/AIDS. Like so many U.S. regions, the Tennessee legislation to expand the medicinal cannabis program in the 2020 General Election, but halted due to COVID-19. Unable to circulate petitions due to quarantine postponed the possible vote.

The Memphis Flyer reported in March 2020 how the virus delayed the legislation this year, but how a glitch in the original bill also stopped movement in 2018. “But there was a huge, last-minute amendment that created a huge, last-minute caveat,” reports the Memphis Flyer. “The bill would only be passed when the federal government downgraded cannabis from a Schedule I drug (alongside LSD and heroin) to Schedule II (alongside cocaine and meth).”

With the amendment removed and COVID-19 slowing down, 2021 maybe the year Tennessee will make the needed move for the thousands of citizens who suffer from disorders alleviated by medical cannabis.

Qualifying for the Current Program

Tennessee’s limited medical cannabis program only allows state residents who have an uncontrolled seizure disorder, including epilepsy, are registered in an authorized clinical research study, are under the care of a certified medical doctor, hospital. If a patient meets all qualifications, they are prescribed cannabis oil types containing no more than 9% tetrahydrocannabinol (THC).

There are no caregiver laws in Tennessee. Only a patient can possess and administer low-level THC cannabidiol that they are prescribed by a neurologist for a diagnosed severe seizure disorder.

A state-registered patient can only possess as much low-level THC oil as prescribed to them by a certified neurologist. Having any other form of cannabis is illegal and will result in criminal charges against the patient. There is no cultivation in Tennessee. Any patient found growing or manufacturing any cannabis will be found guilty of a criminal offense.

In order to recommend cannabis in Tennessee, physicians need to be associated with clinical research on intractable seizure therapy undertaken through a medical college at the University. Recommended clinicians must submit a report on the results of all cannabis research, including the number of patients involved, the study parameters, and the outcomes of each participant, to the Commissioner of Health and Tennessee’s General Assembly by January 2018.

Veriheal will be among the first services helping patients to become approved for medical cannabis use when a viable program ultimately opens.

Places to Visit in Tennessee

Home to Elvis Presley and Dollywood, Tennessee represents music's heart and soul from country to blues. Even more, the southeastern state is home to the Great Smoky Mountains, reportedly more frequented than the Grand Canyon, marveling visitors and locals alike with its awestruck beauty. Tennessee touts the American Museum of Science and Energy, a partner in the Manhattan Project and nuclear bomb development. While developing energy of the future, Tennessee also boasts old western railroads and the globes most massive Titanic Museum. Next time it picking up a monthly prescription of medical cannabis oil, carve out some extra time to stop at any one Tennessee's best places below.

There are so many ways to explore Great Smoky National Park, also called the Smokies. Between fishing, hiking, horseback riding, wildlife viewing, and ranger-led programs, visitors and locals alike get lost in the more frequented landscape than the Grand Canyon. With waterfalls, wildflowers, blooming shrubs, the national park is alive with sound and color, changing with the seasons. Many visit the region in the fall for the surreal seasonal colors. For those that need more than a day to encompass the park, camping sites on the grounds make it possible to turn a day trip into a weekend getaway.

One doesn’t even have to like country music to appreciate the music history in the Country Music Hall of Fame, Music Row, and Grand Ole Opry. Music Row, a street of top record labels and recording studios is where dreams are made of with the music mongols turning unknown talent into fame overnight. The Grand Ole Opry, the true home of country music, is where the greatest artists have poured their hearts and souls out, singing some of America’s all-time favorite songs. Needless to say, visiting the Country Music Hall of Fame is where to stop to find out about the greatest industry artists of all time.

A true to life replica of the Parthenon of Ancient Greece sits in Tennessee, giving the U.S. a piece of Athens. The edifice, which houses a 42-foot statue of Athena Parthenos covered in gold, also hosts the works of century old American painters in the entirely cement building. Built in 1897, the Parthenon is one of the most popular Tennessee spots to visit, giving patrons a glimpse of Greece’s beauty in the southeastern North American state.