Court Strikes Down Voters’ Will for Full Legalization in South Dakota 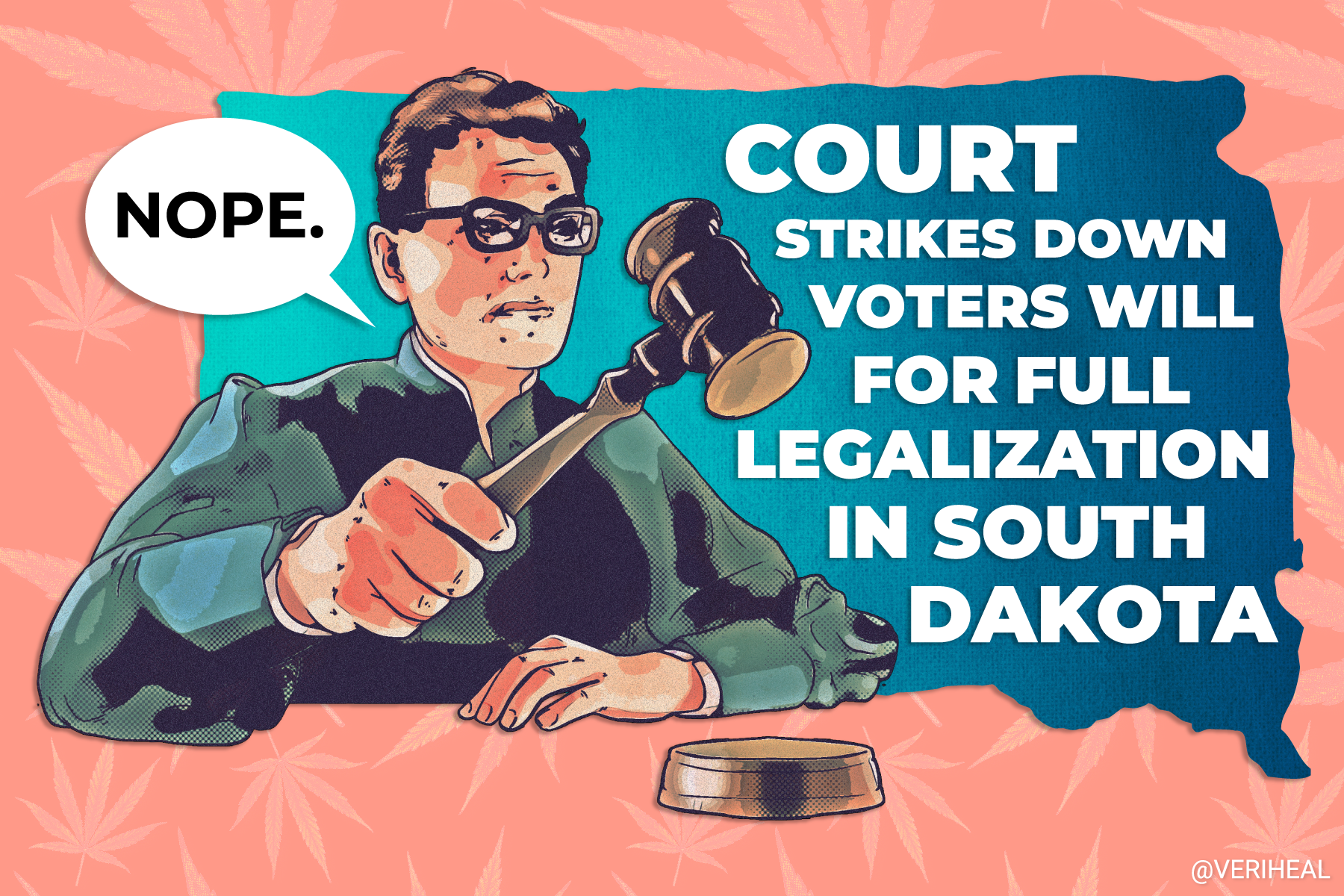 If you believe in something, then take a stand, organize, and vote for it. If you get enough votes, you will succeed in your mission. Recently, this is exactly what the good people of South Dakota did when it came to cannabis legalization. South Dakotans wanted legal cannabis, so they used the democratic process to realize their goal. They worked tirelessly to gather signatures, got the issue put on the ballot, and when the majority approved it; they succeeded in passing cannabis legalization in South Dakota. It was a victorious day for Americans there who took part in the vote. Unfortunately, this victory was short-lived, and would soon be destroyed by the very people elected to represent the citizens of South Dakota.

Thomas Jefferson said, “The tree of liberty must be refreshed from time to time with the blood of patriots & tyrants.” America is touted as one of the world’s greatest democracies, and all Americans learn early on to have faith in the democratic process. People elect political representatives to speak for them and represent their interests in the political arena. However, in the case of South Dakota’s elected representative Kristi Noem, who serves as both the governor and the state’s lone member of the U.S. House of Representatives, it is evident that she failed to accurately represent the people of South Dakota. Let’s look at what happened in South Dakota regarding cannabis legalization and what went wrong.

On November 3, 2020, two initiatives to legalize cannabis appeared on the South Dakota general election ballot. Amendment A, an amendment to the state constitution, if passed, would effectively legalize cannabis for recreational adult use. Measure 26 also appeared on the ballot, seeking to legalize medical cannabis. Amendment A passed, receiving 54% of the vote, and Measure 26 passed, receiving 69.9% of the vote. Legalization was scheduled to take effect on July 1, 2021, but Judge Christina Klinger ultimately overruled the people of South Dakota and struck down Amendment A as unconstitutional for two reasons: the single-subject rule for ballot initiatives and the argument that Amendment A should actually be classified as a revision, not an amendment. If both Amendment A and Measure 26 had been passed, South Dakota would have gone down in U.S. history as the first state to simultaneously legalize both medical and recreational cannabis.

The people dedicated the time, effort, energy, and finances to gather signatures for a cause they felt strongly about. They then drafted an amendment and had it added to the state ballot. On voting day, everyone showed up and placed their vote, passing the amendment with more than 50% of South Dakotans voting yes. After it passed, the state’s governor, along with law enforcement officials, started looking for a way to overturn it.

The motion to strike down Amendment A was instigated by Noem and like-minded colleagues. The lawsuit seeking to disrupt the passage of Amendment A was filed by the Pennington County sheriff, Kevin Thom, and South Dakota’s Highway Patrol Superintendent, Rick Miller. These law enforcement officials, determined to upset the possibility of legal cannabis in South Dakota, argued in their lawsuit that Amendment A violated the state’s single-subject ballot measure provision, and secondly, that it shouldn’t be classified as an amendment at all, since it sought to add a new section to the state Constitution rather than merely modify an existing one.

The people of South Dakota who worked on and voted for these initiatives were none too happy. They promptly took to Facebook to express their discontent, leaving a barrage of negative reviews on the Pennington County Sheriff’s Office’s official page. These negative reviews must have struck a nerve as they have since been removed from the Pennington County Sheriff’s office’s Facebook page.

Although Noem has been vocal about her opposition to legalization, expressing her view that cannabis is a social ill, the argument presented in court primarily relied on technical violations of the state constitution. Noem openly praised the decision of the courts. She told media sources, “South Dakota is a place where the rule of our law and our constitution matter, and that’s what today’s decision is about. We do things right, and how we do things matters just as much as what we are doing.”

The campaign director for South Dakota’s for Better Marijuana Laws, Matthew Schweich, told media sources the ruling was “extremely flawed.” He also said that it was reliant on “a disrespectful assumption that South Dakota voters were intellectually incapable of understanding the initiative. The court has rejected common sense and instead used a far-fetched legal theory to overturn a law passed by over 225,000 South Dakota voters based on no logical or evidentiary support.”

The 225,000 South Dakota residents that voted to legalize cannabis for recreational adult use were ultimately let down by the elected officials, who are meant to represent their interests. However, there is a silver lining. Medical cannabis in South Dakota, Measure 26, did pass in the state and is on track to open as scheduled.

South Dakota’s website for medical cannabis says that the patient application portal is now available for physician certification. The medical cannabis program in the state will be available for patients that have a “debilitating medical condition.” A debilitating medical condition in South Dakota is defined as, “A chronic or debilitating disease or medical condition or its treatment that produces one or more of the following: cachexia or wasting syndrome; severe debilitating pain, severe nausea; seizures; or severe and persistent muscle spasms, including those characteristics of multiple sclerosis.” It’s unfortunate to see politics divide a state that was united on a common cause, and elected officials tasked with representing the will of the people failing to do so. Maybe on the next ballot, the citizens of South Dakota will see their hopes for recreational cannabis legalization come to fruition.