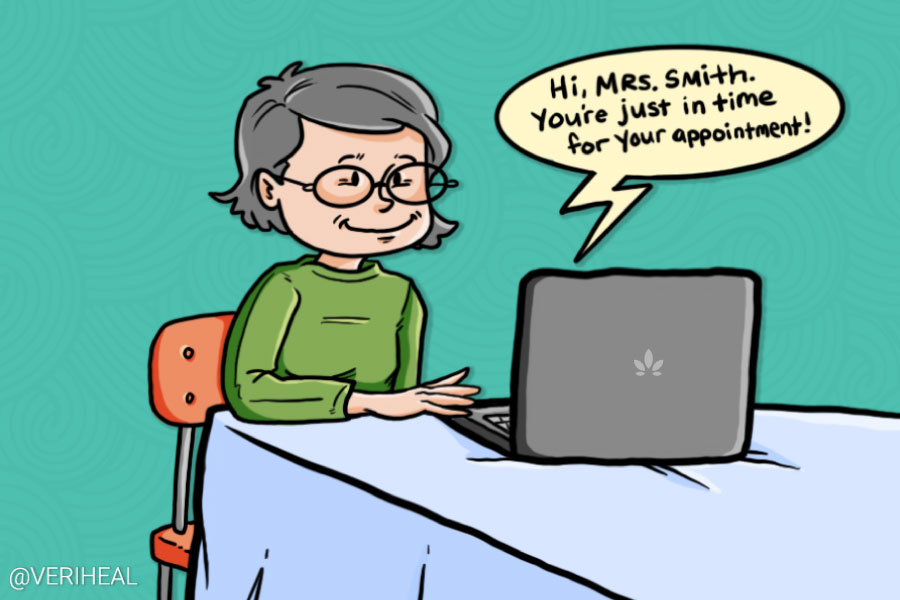 President Trump has addressed a dire need for telemedicine during a critical time. In the midst of a global pandemic, society attempts to adjust to the latest advisories from leaders. Changes in daily life may be shifting for the majority of households during this time in efforts to reduce the spreading of the illness as well as, to comply with newly implemented community restrictions. In every home, this time of quarantine will look different. In addition to having to adjust routine, many conveniences are now, in fact, quite less convenient. However, the changes recently made by the US government during this pandemic have certainly increased the demand for medical cannabis cards in legal states.

People over 60 and immuno-compromised are the most at risk for the increasingly life-threatening complications associated with the effect of this virus. The age demographic getting hit the hardest is also the same group turning to cannabis at the highest rate for other age-related conditions. In addition, many immuno-compromised people use cannabis to deal with other symptoms of their conditions. In this time of near-global panic, cannabis is a natural plant medicine, whose uses and value continues to grow. In times like this, it is the older population that reminds us of the importance of knowing how to survive when the store shelves are empty, including harvesting your own agriculture.

Cannabis has long been known to contain antibacterial cannabinoids, whose potential to address antibiotic resistance has not yet been fully investigated. All five major cannabinoids:  cannabidiol (CBD), cannabichromene (CBC), cannabigerol (CBG), and delta (9)-tetrahydrocannabinol (THC), have shown potent activity against a variety of antibiotic-resistant bacterial strains. Researchers can’t say exactly how these cannabinoids may prove to be superbug infection fighters but the early-stage research results are promising. THC and CBD also have been shown to have pain-relieving, sleep-inducing, and anti-inflammatory properties.

Telemedicine Doctors Are More Valuable Than Ever

Some health systems are fast-tracking planned technology projects such as telemedicine, aimed at screening patients without requiring them to visit a hospital. The coverage of telemedicine is currently heavily regulated and limited with primary availability to residents of rural areas facing long road trips for treatment from specialists. The newly signed bill will allow the government to waive current restrictions on virtual doctors to help deal with the public health emergency created by this virus outbreak. It will also open the way for more lasting changes in Medicare’s coverage of virtual health care, including Skyping a doctor.

The coronavirus legislation signed by President Donald Trump will let Medicare expand the use of telemedicine in outbreak areas, potentially reducing infection risks for vulnerable seniors. The Federal Center for Medicare and Medicaid Services is also encouraging states to expand the use of telehealth in their Medicaid programs for low-income people. This new option will allow millions of people to take care of ongoing medical problems as well as new concerns while heeding public health advice to stay home during the outbreak. Furthermore, HIPAA policies and regulations will be lessened or waived for telemedicine appointments during these times.

Does This Apply to Cannabis Recommendations?

The short answer, unfortunately, is no. With the current scheduling of cannabis on the federal level, doctors can only ‘recommend’ and cannot ‘prescribe’ medical cannabis. Each US state also mandates its own set of rules and regulations in regard to allowing telemedicine for cannabis recommendations. Thus, this issue falls back on the states which have medical programs to shift their regulations during these times.

When we asked the MMCC, the Maryland Medical Cannabis Commission, if telemedicine would now be allowed, we received the following reply:

Furthermore, I urge you to keep in mind that cannabis remains a Schedule I substance that is illegal to possess or use under federal law, and that medical cannabis is only legal under Maryland law when acquired and used in accordance with COMAR 10.62

Since receiving that message, the MMCC issued an announcement that patients can now renew their medical cannabis recommendations by means of telehealth from a qualifying physician.

We know how challenging it can be to stay on top of all of these regulation changes. If you are interested in learning more about any recent regulation changes in your state, contact us today to find out more.