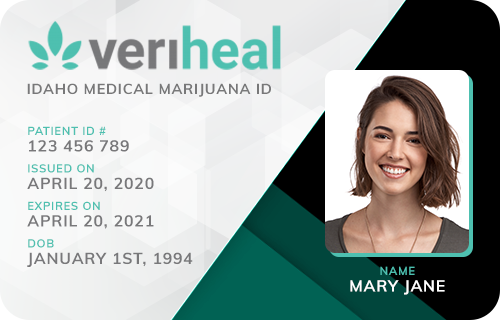 Meet With a Medical Marijuana Doctor in Idaho

It looks like we are not currently helping patients in Idaho to get their medical marijuana cards. However, you can easily join our waitlist to be notified when we're booking appointments in your state.

You can also take advantage of our Personalized Consults as an Idaho resident to better understand how cannabis and CBD may be helpful to you.

How to Get a Medical Marijuana Card in ID

In Idaho, patients will need to re-certify their license annually by seeing a licensed physician again. Veriheal will get in touch with you when your certification is approaching its expiration to help you setup a renewal consultation.

The Status of Cannabis Legalization in Idaho

They were so close.

“The Idaho Citizens Coalition gathered a gross total of roughly 40,000 signatures before calling off signature-gathering events when the governor issues a stay-home order on March 25. They needed over 55,000 signatures by April 30 to get the initiative on the November ballot,” reports the Idaho Press.

Unlike 33 other U.S. states, which began legalizing medical cannabis as far back as 1998, Idaho remains one of the strictest American regions for cannabis, medicinal or not. The coalition collaborated with John Bellville, a retired narcotic counselor and cannabis activist from Nampa, who traveled to all Idaho counties to gather ballot signatures. Rather than expressing resentment that his longtime efforts were thwarted by two years until the next general election, Belleville, a senior who uses medicinal cannabis to ease chronic leg pain, said, “2020 will be the year.”

While Idaho remains in the minority of U.S. states blatantly rejecting medical cannabis, there are states that have approved it across the nation, beginning with Alaska and reaching Missouri and Utah. ProCon.org, a publication of Encyclopedia Britannica, reports in detail the vast differences between U.S. states that legalized cannabis for medicinal and recreational use. With ranging possession limits and consummation, some states permit up to 2.5 ounces in only plant form, while other regions only allow cannabis in oil form, barring edibles and vaporizing pens.

“While 33 states have legalized medical marijuana, the remaining 17 states have all passed laws allowing the use of cannabidiol (CBD) extract, usually in oil form, with minimal tetrahydrocannabinol (THC), and often for the treatment of epilepsy or seizures in seriously ill children. CBD, one of the 400+ ingredients found in marijuana, is not psychoactive,” reports ProCon.

Surely, Idaho legislators like many other U.S. state officials who reject medical marijuana, will come to find that medical cannabis is discussed in citizen conversations more than naught. “Marijuana is a weird issue where the people and the leadership are on completely different pages, Russ Belleville, son of coalition leader John Belleville, who is taking the torch from his father to continue the cannabis campaign for the next general election.

Do I have to be a resident of Idaho to attain a medical marijuana license?

When the state passes a program, the patient must provide either a state driver’s license or identification card to prove they live at a specific address.

How do I go about getting an Idaho medical cannabis card?

Until the state legalizes a program, it is not possible to attain a card. But when they do, it will be simple. When Veriheal sets up shop in Idaho, our team will be available to set you up with a physician who can evaluate your health and confirm your condition.

Can I use my Idaho medical cannabis card outside of the state?

That depends on the state you are visiting, which is why it is important to contact the region in order to find out the medical cannabis rules and regulations.

Places to Visit in Idaho After Enjoying Your Medicine

Famous Sun Valley Resort is a skier’s paradise, attracting snow surfers from all over the country to the peak. And that’s just one Idaho attraction to explore in the Gem State. South of Arco, the Craters of the Moon National Monument is a Mother Nature made moon-like mural shaped by volcanic eruptions dating back to 15,000 years ago. Speaking of the past, Lake Coeur d’Alene, notable for late 19th-century steamboat travels, is a 25-mile stretch of water surrounded by a mountain. One of Idaho’s most famous sites is Hell’s Canyon National Recreation Area. Shoshone Falls is another site to see in the state, offering locals and visitors a notable “Niagara of the West” feel. When the Gem State does pass a statewide medical cannabis program, it will open up the opportunity to visit any one of the below places on the way to the dispensary.

The Idaho recreation area comprises farmland, meadows of flowers, and rolling hills, offering big-time fun in a small Wallowa County town. Hell’s Canyon National Recreation Area in north-central Idaho is North America’s deepest river gorge, appropriately named Snake River. When not camping out in primitive parts of the recreation area, locals and visitors alike are white-water rafting, hiking, and horseback riding. The mountains are white in the national recreation area with skiers and snowboarders cutting up the snow in winter months.

Craters of the Moon National Monument

Imagine camping on the moon--that's what an overnight stay at Craters of the Moon National Monument can create. The preserve, founded in 1924, was expanded by President Bill Clinton's administration, broadening accessibility to the 410-000 acre park. Sandwiched between Boise and Yellowstone National Park, the 618-mile moon-like lava field also has 25 volcanic cones, with many frequenting the Inferno. The North Crater Flow and Devil's Orchard Trails are two other routes to explore in the preserve when not hiking, biking, or running through the rest of it.

The 25-mile non-motorized tree-lined trail is a great way to escape into Mother Nature. The route, which also halts along with many other Idaho top spots, offers an excellent opportunity to experience one of the state’s most talked-about spots. Other Boise attractions include the Old Idaho Penitentiary, World Center for Birds of Prey, and Camel’s Back Park. Also home to the Idaho Botanical Garden, Boise boasts Kathryn Albertson Park and a famous local train depot. After spending a day exploring any city area, many dine and lodge in some of Idaho’s best eateries and hotels.