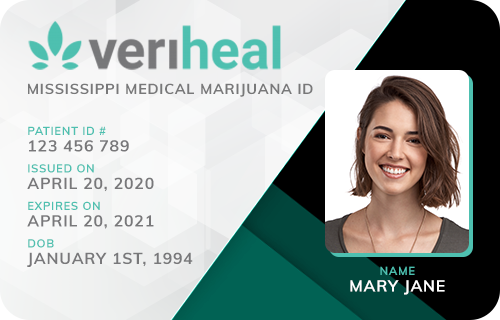 Meet With a Medical Marijuana Doctor in Mississippi

It looks like we are not currently helping patients in Mississippi to get their medical marijuana cards. However, you can easily join our waitlist to be notified when we're booking appointments in your state.

You can also take advantage of our Personalized Consults as a Mississippi resident to better understand how cannabis and CBD may be helpful to you.

How to Get a Medical Marijuana Card in MS

In Mississippi, patients will need to re-certify their license annually by seeing a licensed physician again. Veriheal will get in touch with you when your certification is approaching its expiration to help you setup a renewal consultation.

The Status of Cannabis Legalization in Mississippi

Under the passages of both 65 and 65A, the Department of Health in Mississippi will be responsible for developing regulation for the program by July 1, 2021. Medical cannabis cards are set to be issued by August 15, 2021. Mississippi legislators, who have long fought medical cannabis in the state, authored their counter questions, called Alternative 65, which reportedly “does not specify who, if anyone, will be able to receive medical marijuana or when, if ever, a program would be set up,” reports Medical Marijuana 2020.

Up till now, Mississippi has permitted the most minimal medical cannabis program, only permitting low THC-oil for residents who have severe seizure disorders. Mississippi’s very restricted program came about because of Harper Grace, an adolescent who suffered chronic seizures characteristic of epilepsy relieved by CBD oil.

The law titled HB1231 provided legal protection for qualified patients with a debilitating epileptic condition to obtain low-THC (0.5%) cannabis oil legally. However, the oil can only be purchased from the National Center for Natural Products Research at the University of Mississippi and is dispensed by the University of Mississippi Medical Center Department of Pharmacy Services.

According to the local NBC station in Mississippi, “A campaign for medical marijuana is more than just a ballot initiative, it’s another line of hope for some Mississippi families,” which was the case with Ashley Durval and her daughter Harper Grace in 2014. However, the legislation, called the Harper Grace Law, stalled for four years, with Durval saying in 2018, “When we did the bill initially, I never thought it would take as long as it has.”

Now, two years later, Mississippi residents can see relief from medical cannabis. “It was about Harper Grace, and then I got the pleasure of meeting many families who were going through way worse situations than we ever thought of going through,” Durval said in 2018.

Is medical marijuana legal in Mississippi?

Mississippi does not have a medical cannabis program. In 2014, the bill known as Harper Grace’s Law was passed, allowing affirmative defense for patients suffering from debilitating seizures for the use of CBD oil (low THC cannabis oil). However, the law limits the use of this oil, which can only be produced at the National Center for Natural Products Research and dispensed by the University of Mississippi Medical Center. Therefore, it is very difficult for patients like Harper Grace to access the CBD oil.

What is low THC cannabis?

Low-THC cannabis oil (also known as CBD oil) has very low quantities of THC (no more than 0.5% in Mississippi) and does not generate the “high” frequently associated with cannabis. THC is the cannabinoid responsible for cannabis’ intoxicating effects.
Patients with cancer or a disease that causes chronic seizures or muscle spasms sometimes use low-THC cannabis oil for treatment. Mississippi only allow forms of CBD oil that contain very small percentages of THC.

Places to Visit in MS After Enjoying Your Medicine

Mississippi, a fun state name to learn to spell, has even more adventure within its nearly 50,000 square miles of land and water. The Deep South State, bordered by Tennessee, Louisiana, Alabama, and the Gulf of Mexico, is most famous for its river, titled after the region, and its Civil War history as a cotton-producing region. Locals and visitors frequently stop at the many monuments of the past and see other notable sights, including the place where Elvis Presley was born. Beyond the mainland is the Gulf Islands National Seashore, which touches the tip of Florida’s Santa Rosa Island. For those who need to take a trip to pick up CBD oil, stopping at any of the below best places in Mississippi will surely make the trip much more fun.

Famous for football and life changing stories like the film The Blind Side, “Ole Miss” is the state university where dreams are born. The Oxford-based university touts Civil War cemeteries and hiking trails through Bailey’s Wood. The historic downtown square is where locals and visitors alike gather for shopping, food and entertainment. While in town, stopping at the University of Mississippi Museum is a must do if time permits.

Born in Tupelo, the King of Rock and Roll, Elvis Presely, will forever be remembered at his birthplace home. Completely preserved, the small home depicts Presley’s early life. The chapel that Presley grew up in was relocated to the property so patrons can peruse the pews that Presely praised the Lord in, being inspired to become one of the greatest singers of all time.

Scenic lookouts and historic landmarks cover miles of Natchez Parkway, the perfect route for a drive through Mississippi. For those who like to use different modes of transportation rather than ride in a vehicle, a bicycle route is available so patrons can exercise and sight ee simultaneously. The 444-mile parkway named after the Native American tribe of the Natchez also hosts hiking, camping, and horseback riding for those who would like to step out of the car for a few hours or overnight.