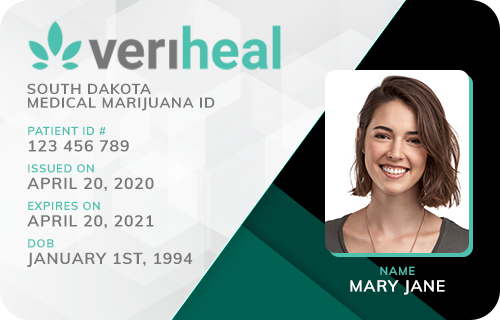 Meet With a Medical Marijuana Doctor in South Dakota

It looks like we are not currently helping patients in South Dakota to get their medical marijuana cards. However, you can easily join our waitlist to be notified when we're booking appointments in your state.

You can also take advantage of our Personalized Consults as a South Dakota resident to better understand how cannabis and CBD may be helpful to you.

How to Get a Medical Marijuana Card in SD

In South Dakota, patients will need to re-certify their card annually by seeing a licensed physician again. Veriheal will get in touch with you when your certification is approaching its expiration to help you setup a renewal consultation.

The Status of Cannabis Legalization in SD

South Dakota joined four other states with ballot measures for medicinal or recreational cannabis use to be voted on in the 2020 election. Between Measure 26 (which would legalize the flower for therapeutic use) and Amendment A (which is a constitutional alteration to legalize recreational use) the one fell swoop measure, if approved, will put the Mount Rushmore State on the cannabis map as a pioneer.

Not only would it make a bold ballot statement, but the anticipated tax revenue up until 2024 is also in the millions. “Legalizing cannabis would provide revenues from licensing fees, sales tax, and 15% excess tax,” according to the South Dakota Legislative Research Council. “After regulatory costs, the state would distribute 50% of net revenues annually to public schools and 50% to the general fund.”

Additionally, state incarceration costs would reduce significantly based on the decriminalization of several laws. Ohio also attempted to pass both types of use of cannabis (medical and recreational in 2015. According to Cleveland.com, limited commercial growth had citizens voting down the measure, claiming the monopoly threatened the state constitution. “Ohio voters on Tuesday said they were not ready to legalize marijuana, despite a multimillion-dollar campaign aimed at convincing them that the time and the plan were right,” reported the news source in 2015 directly after the election.

We are excited to report that in November 2020, South Dakota officially became the first state to simultaneously legalize recreational and medicinal cannabis with the Amendment A and Ballot Measure 26.

Ballot Measure 26, passing by 69% of the vote, legalizes medicinal cannabis and allows cannabis card holders to possess and purchase up to three ounces of cannabis from a licensed dispensary. The state Department of Health will have until October 29, 2020 to enact regulations for the medical cannabis program and will issue cards by November 18, 2020.

The state has no program nor qualifying conditions.

Without a designated statewide program, there are no caregiver laws set up for assisting patients with medical cannabis in South Dakota.

There are no definitive possession laws regarding medical cannabis since the state of South Dakota does not have a program.

Does South Dakota refer me to certified medical cannabis physicians?

No, the state does not offer any physician referrals, which is why Veriheal will set up shop in South Dakota when the state approves a medical cannabis program to help patients make appointments with registered physicians.

Places to Visit in South Dakota After Enjoying Your Medicine

Theodore Roosevelt, Thomas Jefferson, George Washington, and Abraham Lincoln are the face of South Dakota, home to Mount Rushmore. South Dakota is also famous for Badlands National Park and Custer State Park, where bison roam free. Right smack in the middle of America, the Mount Rushmore State is home to underground caves and woodlands once home to Native American tribes. Add in the city of Deadwood, a replica of the Old West, and visiting South Dakota is like stepping back in time. Visitors and locals alike can even travel back further visiting the Mammoth Site in Hot Springs, where more than 60 prehistoric bones have been found. When South Dakota does pass a statewide medical cannabis program, there are plenty of places below to stop and explore on the way to the dispensary.

Likely the most famous mountain in America, Rushmore tells the history of the U.S. with four presidents' faces. According to sculptor Gutzon Borglum, the four presidents represent the most critical events in American history. Washington led the American Revolution, Jefferson was the prominent author of the Declaration of Independence, Roosevelt led the country in the Industrial Revolution, and Lincoln held the U.S. together during the Civil War. Those reasons alone are enough to visit the massive monument. The National Park also offers area activities and attractions for those who travel far and wide to the iconic peak in the park via helicopter rides and kayaking on Horse Thief Lake.

Feeling fish and watching butterflies flutter all around you is why locals and visitors flock to Sertoma Butterfly House and Marine Cove. The interactive and educational family attraction offers children and adults the opportunity to feed butterflies and take unique behind the scene tours. Along with hosting ever-changing animal exhibits and programs, the site has an animal adoption program, making it possible for patrons to leave with a new member of the family.

Between the Sculpture Walk and Arc of Dreams Monument, St. Joseph’s Cathedral, and Great Plains Zoo & Delbridge Museum of Natural History, there is no reason not to visit Sioux Falls. To get a feel for the tiny metropolis’ history, many see the Pettigrew Home and Old Courthouse Museums and USS South Dakota Battleship Memorial. Others enjoy visiting the city to experience the Washington Pavilion Arts and Science Attractions, popular for performances and events for adults and a space level and water table for children. Of course, Sioux Falls has other excellent entertainment venues, along with some of the best eateries in the state.