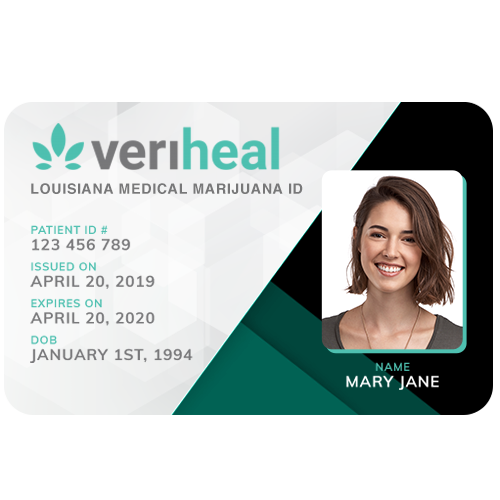 Apply for a Medical Marijuana Card in Louisiana

Talk to a licensed Louisiana medical marijuana doctor and get approved or your money back!

How to Get a Medical Marijuana Card in LA

Watch this video to learn more about getting a medical marijuana card in Louisiana.

About Cannabis in Louisiana

Louisiana is one of the other 33 states that permit some type of medical marijuana. On August 2019, Louisiana became the first Deep South state to dispense medical marijuana four years after government legislators agreed to give patients the right to access therapeutic cannabis.

Nine medical marijuana pharmacies are authorized throughout Louisiana and most of them are soon to be opened. One of two state-sanctioned growers, GB Sciences starts to send medical marijuana to the licensed distributors of Louisiana.

In accordance with the legislation of 2015 and further modifications since then, Louisiana permits medical cannabis to treat a large number of illnesses and diseases like cancer, seizure, epilepsy, glaucoma, post-traumatic stress disorder, and Parkinson’s disease.

Doctors are issuing a physicist recommendation form, rather than a prescription, a legal nuance designed to prevent physicians from compromising their medical licenses, since federal law forbids marijuana prescription. The Louisiana authorization needed to give patients a medical-grade cannabis was approved for 88 state physicians.

Marijuana can be found in oils, pills, liquids, topical applications, and inhalers such as those used by patients with asthma but not in a smokeable form.

Applying for Medical Marijuana in Louisiana

Unlike other states, there is no particular application program in the state of Louisiana that must be completed to apply for medical marijuana. Initially, patients will have to meet a doctor to talk about their condition. Once you obtain a valid doctor’s recommendation and are finally entitled to medicinal cannabis in the state, you will be registered to the program, at which time you can visit a cannabis pharmacy to purchase legal medication.

But it’s not always an easy task to find a medical doctor in Louisiana that can recommend you for medical cannabis. There are conflicting reports about how many doctors actually qualify to issue marijuana recommendations in the state.

Veriheal took the difficult part of the equation and simplified the whole process of medical marijuana approval. For a quick consultation, Veriheal will connect you with an approved healthcare professional so you can access your medicine as quickly as possible.

A 30-day supply of non-smokable marijuana preparations is permitted. In the state, however, cultivation is illegal. The agricultural centers of LSU and Southern University have chosen two businesses to grow and manufacture medical cannabis.

Nine distribution pharmacies have been selected by the Louisiana Board of Pharmacy. Louisiana law prevents the sale of marijuana in any form that may be smoked. The forms sold at state-approved pharmacies will include pills, topical creams and oils and can only be given to patients with a recommendation form from a doctor.

What is the first step to getting a Louisiana medical marijuana recommendation?

How can I find a registered MMJ Physician in LA?

Veriheal directly connects patients with licensed physicians who are eligible to approve patients for medical cannabis.

Who will be able to get a Louisiana medical marijuana recommendation?

Patients with qualifying conditions are able to get a Louisiana MMJ recommendation.

What are the qualifying conditions in Louisiana?

The state defines a qualifying condition as any one of the following: Cancer Positive status for human immunodeficiency virus (HIV) Acquired immune deficiency syndrome (AIDS) Cachexia or wasting syndrome Seizure disorders Epilepsy Spasticity Crohn’s disease Muscular dystrophy Multiple sclerosis Such other diseases or conditions that may subsequently be identified as a debilitating medical condition by amendment of R.S. 40:1046 or other state law.

No. Driving or operating any kind of vehicle such as motor vehicle, boat, or aircraft while under influence of marijuana is not allowed.

No you can not. You can only get approved for medical marijuana from a practitioner that has registered with the Louisiana medical marijuana program. And for that, we provide you a physician so you do not need to go through your primary care physicians.

Is there anywhere to find out more information?

Visit the Louisiana State Board of Medical Examiners website at www.lsbme.la.gov.

At one point it did but has since been removed as a qualifying condition.

The cost is $199 and that covers your medical evaluation, your consultation with a licensed Louisiana practitioner registered with the state, and an authorized certification for medical marijuana purchases. For $379 you and a friend or family member can both get your cards for a nice little discount. There is an additional state fee of $100 to submit the state application.

Where are the dispensaries in LA? Is there a dispensary near me?

Dispensaries will be opening all over the state. You can see a list of Louisiana dispensaries here.

Does Veriheal operate in other states?

Yes! Check our homepage for a list of active states.

Sign up and we can get you approved in no time!