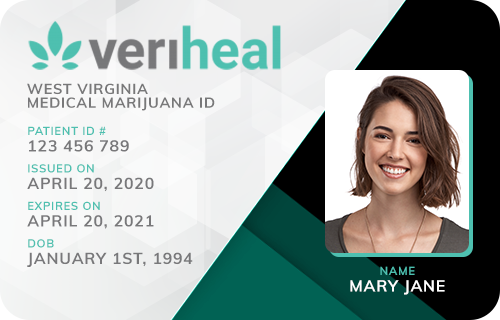 Talk to a licensed West Virginia medical marijuana doctor and get approved or your money back! If you are not approved for medical cannabis by a doctor for whatever reason, we issue a refund in FULL

Once you are approved, you’ll register with the state and submit an application for your medical cannabis card with the West Virginia Office of Medical Cannabis through the WV online platform. The application process is very detailed, so please refer to your congratulations email from Veriheal for assistance. You will be asked to provide the following information for your application and submit a payment of $50:

In West Virginia, patients will need to re-certify their license annually by seeing a licensed physician again. Veriheal will get in touch with you when your annual certification is approaching its expiration to help you set up a renewal consultation.

They helped me get onto the right path for myself, and discover the healing benefits of marijiuana.

Watch this video to learn more about getting a medical marijuana card in West Virginia.

On April 19, 2017, West Virginia passed Senate Bill 386, creating the Medical Cannabis Act. This act allows West Virginia residents with serious medical conditions to purchase cannabis in the form of pills, topical products like gels, vape/nebulization products, tinctures, dermal patches, and dried cannabis flower. Licensed dispensaries will not allow patients to purchase edibles, but medical cannabis products can be mixed into food and drinks by the patient after purchase.

Click here for the request form to add qualifying medical conditions to be covered under the law in West Virginia.

West Virginia’s medical cannabis program is still relatively new, and product selection is limited at this time. Medical cannabis patients can purchase dry cannabis flower, concentrates and extracts, vaporizers, topicals, and some oral products such as capsules and tinctures.