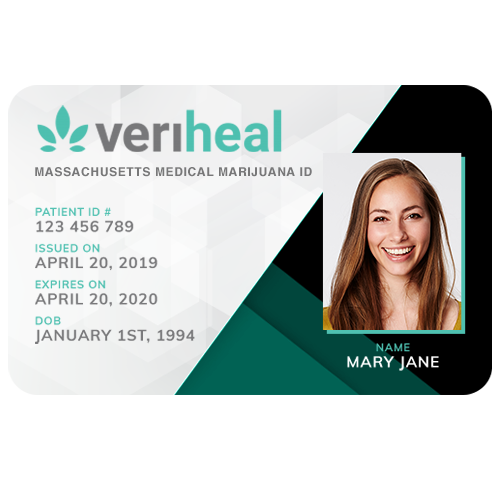 Apply for a Medical Marijuana Card in Massachusetts

Talk to a licensed medical marijuana doctor in Massachusetts and get approved or your money back!

How to Get a Medical Marijuana Card in MA

Schedule an appointment to see a doctor in Massachusetts through Veriheal at a time that is most convenient for you. Consult with a doctor for 10-15 minutes to evaluate your ailments, and ask any questions you may have about medical marijuana treatment.

If you are approved, you will receive a temporary recommendation that you can use at a dispensary. You’ll use this temporary number to register with Massachusetts’ Medical Use of Marijuana Program online to complete your application.

Once you are approved and registered with the program, you’ll wait for your card to come in the mail in 2-3 weeks. The great thing about Massachusetts is you don’t need to wait for the card in the mail. You can use the temporary recommendation in the meantime.

Every patient in Massachusetts will need to be re-certified annually by a licensed physician. Veriheal will get in touch with you when your certification is approaching its expiration to help you setup a renewal consultation.

What You Get Using Veriheal in Massachusetts

Very easy to connect with a doctor who can speak in real-world terms and address questions and really explains the recommendation. Excellent.

Watch this video to learn more about getting a medical marijuana card in Massachusetts.

About Cannabis in Massachusetts

It took Massachusetts more than three years to get its medical cannabis program up and running; The program became effective in 2013 when a voter referendum passed with approval of 63%. While retail sales of medical cannabis finally began in 2016, the state legalized recreational use in 2018, taking far less time to get things going. MassLive reported in May 2020 that the Bay State pulled in $122 million in tax revenue in sales, proving non-patient and patient citizens want legalization for the plant for both recreational and medicinal purposes.

The Commonwealth of Massachusetts Cannabis Control Commission (CCC) has worked to make medical cannabis card registration easy, streamlining the process online. In August 2020, the CCC proposed raising the number of patients a caregiver could assist to 10 at a time; the notion was opposed by the Massachusetts Patient Advocacy Alliance, according to MassLive.

On the recreational use front, efforts to allow for recreational delivery are also underway. CCC and state representatives are working out the third phase of the rule-making regarding the matter. “The commission approved a delivery license structure in the fall and made applications available in May, but has not yet licensed a delivery-only business,” an August MassLive news report explains.

Now that Massachusetts has legalized medicinal and recreational cannabis use, it is likely that the state will continue establishing policies and procedures leading to the creation of another $122 million in cannabis tax revenue from sales. This is good news for patients and non-patients alike.

Massachusetts has eight specific conditions that make residents eligible for the medical cannabis program, including:

The state also allows “other conditions that severely limit one or more major life functions,” that a doctor can confirm. There is no medical cannabis registration card fee in Massachusetts. The once required $50 fee for an annual card was dropped in 2019.

Registering a Caregiver in Massachusetts

Caregiver requirements in Massachusetts include providing current acceptable identification that proves residency. A valid driver’s license or state identification card with a clear photo are two forms of allowable identification. Additionally, a caregiver must be at least 21-years-old and a resident of the state. A caregiver must renew their card annually for it to remain valid. Once approved by the state, the caregiver will be given a specific registration number allowing them to purchase cannabis products on the patient’s behalf.

Possession and Cultivation Limits in Massachusetts

Since Massachusetts legally sells both recreational and medicinal cannabis, the possession and cultivation laws for adult use are the same. The specific rules reported by the state include: you can’t use marijuana in any form (smoking, vaping, edibles, etc.) in public or on federal land; you can have up to 1 oz on your person and up to 10 oz in your home; you can grow up to 6 plants in your home and up to 12 plants for 2 or more adults; and if you have more than 1 oz of marijuana in your home, it has to be locked up, but it’s best to keep any amount locked away to keep kids and pets safe.

Additionally, like alcohol, you can’t have an open container of any form of marijuana in the passenger area of your car while on the road or at a place where the public has access, and it must be stored in a closed container in your trunk or a locked glove compartment. It’s illegal to drive under the influence of marijuana; if you use, don’t get behind the wheel. Instead, use public transportation, ride-shares, or catch a ride with a sober friend.

Medical cannabis users and non-patients alike should be informed that their “employers, landlords, cities, and towns may have their own policies about the use of marijuana,” according to the state.

Do I have to live in Massachusetts to become a Medical Marijuana Patient there?

Yes. You need to show a Massachusetts ID or state driver’s license to prove your address.

How do I apply for a medical marijuana card in Massachusetts?

Before registering with the Massachusetts’ Medical Use of Marijuana Program, you will need to be certified by a qualified healthcare provider. Veriheal can help you set up an appointment with a physician. Just fill out the form at the top of this page. After your certification, you will receive a PIN number to register with the medical marijuana program in Massachusetts.

Veriheal’s team can help you find a registered physician in Massachusetts through our platform.

Do I need to see the physician on video or do I just go right in person?

Patients are now able to be certified via telemedicine by a qualified and registered practitioner in Massachusetts. After the consultation with the practitioner, if you are not approved, you will receive your money back, which includes the cost of the appointment.

The medical evaluation usually takes 10-15 minutes from start to finish.

No. Massachusetts has strict laws prohibiting using cannabis and operating any kind of vehicle.

No. You can only get approved for medical cannabis by practitioners who are registered with the Massachusetts’ Medical Use of Marijuana Program.

Is chronic pain a qualifying condition for medical cannabis?

Yes, it is. Massachusetts considers any condition, including chronic pain, that keeps patients from performing major life activities as an eligible disorder.

Is there a limit on the medication that I can have with my card?

Yes. Massachusetts only allows patients and non-patients alike to possess up to 1 ounce of cannabis on their person and up to 10 ounces in their home.

What is the cost for Veriheal to set up the consultation for my approval?

The cost is $199. That covers your medical evaluation with a licensed Massachusetts practitioner and an authorized certification for medical cannabis if you are approved. For $379, Veriheal will assist with certifying you and a family member or friend.

Once I get my card, what type of medicine can I buy from dispensaries in Massachusetts?

With one of the most diverse medical marijuana programs, Massachusetts allows patients access to a variety of medical cannabis products, including dry flower, tinctures, oils, concentrates, topicals, edibles, and capsules.

Where are the dispensaries in Massachusetts? Is there a dispensary near me?

There are already tons of dispensaries all over the state. You can see a list of Massachusetts dispensaries here.

Fill out the form above, and we can help you set up an appointment in no time!

Places to Visit in MA After Enjoying Your Medicine

From rocky shores to deep forests, Massachusetts offers so many outdoor activities all year through to keep visitors and locals coming back for more fun. Famous for Freedom Trail, the Bay State boasts up to 16 historic monuments along the three-mile stretch. As for the beach scene, Cape Cod is the quintessential Massachusetts beachfront, with up to 560 miles of white sand and coastline. Speaking of the ocean, whale watching at the Stellwagen Bank National Marine Sanctuary is a famous stop for locals and visitors alike when not going further inland to Salem, famous for its witch trials.

There are so many ways to explore the city nicknamed the Hub from Old Town Trolley tours to Urban Scavenger Hunts. Boston nightlife is like no other, with avant-garde restaurants and in vogue clubs. In the afternoon, shopping is ideal in Boston, with glass-enclosed galleries lined with high-end brand stores. You can also enjoy Boston on the water, with daily cruises that float through the historic inner harbor. Of course, for a little more water adventure, high-speed catamaran whale watching is also available in one of the East Coast's famous cities.

The historic museums, churches, meeting houses, and burial grounds of the Freedom Trail, a three-mile stretch, reflect the American Revolution's rich history. Beginning with Boston Common, America's oldest public park, and ending with the Bunker Hill Monument, walking the trail is an excellent way to learn about the historical war that brought the U.S. freedom. More notable markers along the route include the Benjamin Franklin statue, Park Street Church, and the USS Constitution Ship.

The famous island where A-listers gather south of Cape Cod is filled with real-life Gingerbread Houses and white sandy beaches. Scenic as a fairytale, Martha's Vineyard even has island alpacas to pet. Picnicking at the Edgartown Harbor Lighthouse is also a must when visiting the peninsula. After eating lunch at the lighthouse, locals and visitors bike at the nearby Mytoi Japanese Garden, featuring 14 acres of flower gardens, ponds, and walking trails.