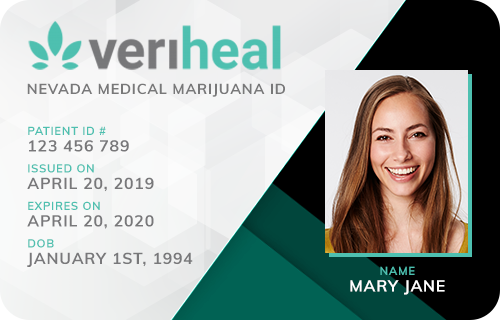 Apply for a medical marijuana card in Nevada

Talk to a licensed NV medical marijuana doctor online and get approved or your money back!

How to Get a Medical Marijuana Card in NV

Watch this video to learn more about getting a medical marijuana card in Nevada.

What You Get Using Veriheal in Nevada

About Cannabis in Nevada

Cannabis in Nevada became legal for recreational use effective January 1, 2017, having been legalized by ballot initiative in 2016. Medical marijuana use was legalized by ballot initiative in 2000, and has been available to licensed individuals in the state since shortly after that date. Nevada also licenses growers and distributors, and citizens of Nevada are banned from growing their own cannabis unless they live more than 25 miles from a licensed dispensary.

For almost three years, medical marijuana was legalized in various regions of the state of Nevada. However, recreational marijuana sales only started in specific areas of the state at the beginning of July 2017 because of a law that took effect at that time; this law renders persons that are at least 21 years old and bear valid identification legally capable of purchasing the drug in those regions for recreational purposes.

State law currently allows for the possession of 2.5 ounces of consumable marijuana in any 14-day period (NRS 453A.160). Twelve marijuana plants are permitted, irrespective of their maturity (NAC 453A.080). Consumable products are permitted with an equivalent content of psychoactive compounds such as THC (NRS 453A.112). The state of Nevada conducted a public workshop on February 4, 2016 in order to solidify proposed changes to NRS 453 defining serving sizes for edible products containing THC as well as clarifying language within the statute.

Approved conditions for legal medical use of marijuana or marijuana products

Additionally, performing certain recreational activities while under the influence of marijuana is illegal. (For instance, operating a water ski, surfboard, windsail or similar device.)