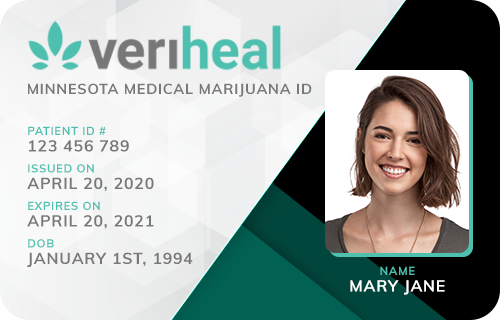 Talk to a licensed Minnesota medical marijuana doctor and get approved or your money back!

How to Get a Medical Marijuana Card in MN 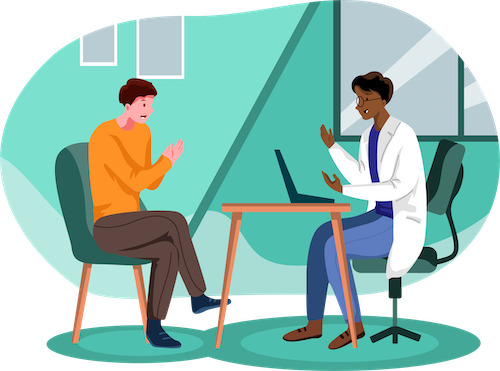 Consult with a doctor for 10-15 minutes to evaluate your ailments, and ask any questions you may have about medical marijuana treatment. Make sure to print and complete the ‘Patient Email &
Acknowledgment’ form and bring this with you to your appointment. After the appointment is complete and if you are approved, the doctor will provide an appointment summary and a list of your current medications. You’ll need this to purchase your medicine at your Cannabis Patient Center.

In Minnesota, patients will need to re-certify their license annually by seeing a licensed physician again. Veriheal will get in touch with you when your certification is approaching its expiration to help you setup a renewal consultation.

What You Get Using Veriheal in Minnesota

The Status of Cannabis Legalization in Minnesota

With White Earth Nation voting to legalize medical cannabis by a 994-150 tribal vote, patients who seek relief from its many healing properties can now consume it without penalty, reports Red Lake Nation news. Six years after the state of Minnesota legalized medical cannabis in 2014, “the measure allows the Tribal Council to create its own rules governing medical cannabis on the reservation that wouldn’t be subject to Minnesota’s medical marijuana laws, which are considered among the most restrictive in the nation,” reports the news source.

Minnesota Public Radio (MPR) News reported in 2019 just how restrictive the program is. “More than four years in, the state’s program serves relatively few people and is considered to be too expensive by many patients,” says MPR news. “The exact form the program will take in the future is unclear, as some lawmakers push for Minnesota to join other states that allow the sale of recreational marijuana.”

While Minnesota and dozens of other states consider recreational use along with medicinal, up to 11 states in the U.S. legally allow both types in their regions, proving it not only helps patients, but it seriously boosts the economy.

Along with having a qualifying condition, a Minnesota resident must prove their place of address with a valid state driver’s license or identification card. The state fee for the Minnesota Medical Cannabis application is $200 which is paid annually. Patients who have SSI, SSD, or are enrolled in Minnesota care may be eligible for a reduced fee of $50.

A patient can add a caregiver to their Registry account, the caregiver will receive an email invitation to set up their own account in the Registry. The caregiver must provide: name, address, date of birth, phone number, and a government-issued ID: State ID card, Driver’s License, or Passport and will need to complete a criminal background check through the Minnesota Bureau of Criminal Apprehension. The caregiver application fee is $15 and they must be at least 21 years of age.

Possession and Cultivation of Medical Marijuana in Minnesota

Minnesota has very strict possession and cultivation regulations, with only two in-state manufacturers producing all medical cannabis in Minnesota. Based on state law, “manufacturers are required to ensure that the medical cannabis distributed contains a maximum of a 30-day supply of the dosage determined for that patient.” Additionally, “pharmacists at registered Cannabis Patient Centers recommend specific dosage and type for patients.” Permissible forms of medical cannabis include but not limited to oil, pill, and any vaporized delivery method, which does not use raw plant or dry leaves.

Do I have to be a resident of Minnesota to attain a medical marijuana license there?

Yes, all applicants must provide a state-issued driver’s license or identification card to prove residency or they are not eligible for a medical cannabis certification in the state.

What is the first step to getting a medical marijuana card in Minnesota?

The state of Minnesota has never officially issued medical cards as part of the medical cannabis program, but are instead simply certifications. The first and most important step is to schedule a physician appointment with Veriheal. You can upload your medical records for evaluation by the physician. Following your appointment with the physician and if you are approved, he or she will recommend certification for medical marijuana.

From start to finish, the physician consultation usually takes 10-15 minutes.

What if I am not approved for medical cannabis in Minnesota?

Veriheal has a very high approval rate for medical cannabis licensure. However, if you are not approved, you will be refunded in full.

Does chronic pain qualify as a condition for medical cannabis in Minnesota?

When I am certified, what type of medicine can I buy from Minnesota dispensaries?

The state of Minnesota requires that you buy any medical cannabis prescriptions from state approved dispensaries, which provide different types of medicine at different locations.

Places to Visit in Minnesota After Enjoying Your Medicine

Famous for the Mall of America and the International Wolf Center, not to mention the Split Rock Lighthouse State Park, Minnesota has more than enough to keep locals and visitors enticed. The midwestern state, bordering Canada and Lake Superior, also boasts St. Cloud Clemens Garden, with up to 80,000 annual plants among benches, swings, ponds, and fountains. For more of Mother Nature, Minnesota's 32,000-acred oldest state park of Itasca has hiking trails, bike routes and Wilderness Drive for scenic byway view. If time allows, take a detour on the way to the dispensary to any of the below places for some Minnesota memory making.

It’s America’s biggest mall with more than 500 shops to peruse in Bloomington. If one day of shopping is not enough, hotel accommodations at the mall make it possible to stay overnight. Theaters and restaurants throughout the mall give visitors chances to get off their feet when shopping to enjoy a movie or snack. Some even visit the Mall of America at certain times of the year during any one of the 400-holiday events held annually.

Made possible by the Munsinger Clemens Botanical Society, this garden is one-of-a-kind, filled with more than 1,100 rose bushes and 80,000 annual plants that bloom all year round. Visitors can enjoy the vast garden in several ways, whether sitting on a bench, picnicking at a pond, or taking a swing. The site also hosts Music in the Garden bi-monthly and art fairs, featuring famed musicians and artists from around Minnesota.

As one of the Twin Cities, St. Paul compliments Minneapolis well. Built around the Cathedral of St. Paul, the city is lined with Golden Age mansions along Summit Avenue, the largest and longest collection of Victorian edifices in the U.S. according to Planetware. Along with sightseeing up to 373 original mansions, the top tourist news source adds “the area also offers plenty of things to do for families, including an excellent zoo with a neighboring amusement park, a science museum, and a children's museum.”