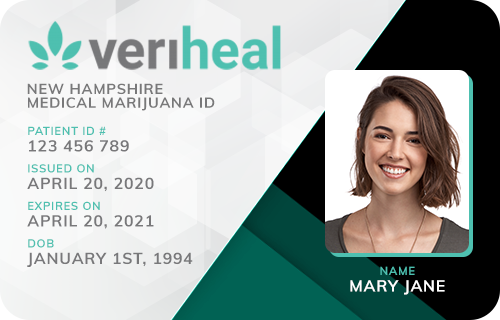 Talk to a licensed New Hampshire medical marijuana doctor and get approved or your money back! If you are not approved for medical cannabis by a doctor for whatever reason, we issue a refund in FULL

How to Get a Medical Marijuana Card in NH

In New Hampshire, patients will need to re-certify their license annually by seeing a licensed physician again. Veriheal will get in touch with you when your certification is approaching its expiration to help you setup a renewal consultation.

What You Get Using Veriheal in New Hampshire

Great company that did exactly what they said they would!

Setting up the appointment was really easy and the virtual doctor visit was simple and resourceful.

The Status of Cannabis Legalization in NH

Signed into law by then Gov. Maggie Hassan in 2013, the medical cannabis program has been alive and well in the Live Free or Die State. Though medical cannabis flies in the Granite State, recreational use is still an issue, with advocates pushing to see a change in the 2020 election, which does not look good. Meanwhile, citizens feel otherwise, according to the University of New Hampshire Poll, reporting up to 68% of New Hampshire residents support recreational use.

The 2019 poll report reads that “the issue of legalizing marijuana in New Hampshire has been subject to debate for years.” The poll report continues, noting regional cannabis allies who feel the same. “In recent years, all of New Hampshire’s neighbors–Maine, Massachusetts, Vermont, and Canada have legalized marijuana for recreational purposes.”

While advocates argue that officials must be more progressive when it comes to politics and cannabis, officials met them halfway in 2017, decriminalizing the drug for possession of small amounts. While recreational use hangs in the balance, New Hampshire has rolled out a solid medical cannabis program for eligible patients.

Additionally, the condition must be severely debilitating or terminal, or its treatment has produced at least one of the following symptoms:

Lastly, severe pain that has not responded to previously prescribed medication or surgical measures, or for which other treatment options produce serious side effects, also makes patients eligible for a medical cannabis card.

Along with any qualifying condition, a patient must be at least 18 years old to apply for a card and prove they are New Hampshire residents with a current driver’s license or state identification card. The state also mandates that a patient and provider must have an ongoing relationship for at least three months, with some exceptions made for special circumstances.

Like a cannabis patient cardholder, a caregiver must also be a resident of the state and able to prove so with a current driver’s license or state identification card. A caregiver, unlike a patient, must be at least 21 years old, and designated as such on the patient’ application. Also, a caregiver must not have any felony conviction against them to be registered with the state. A criminal background check is performed on all prospective caregivers.

A qualifying patient shall not obtain more than 2 ounces of usable cannabis directly or through the qualifying patient’s designated caregiver during a 10-day period. Since New Hampshire decriminalized possession of small amounts of cannabis for any resident 18 years or older who has less than three-quarters of an ounce of cannabis; however the violation comes with a possible $100. Additional offenses raise fines.  Fines rise for third and fourth offenses.

The fines also apply to any resident found with a large amount of cannabis-infused products including edibles, drinks, tinctures, and ointments. If found violating more than three-quarters of an ounce of any of the notes could result in a $350 fine and one year prison time.

As for hash, any resident 18 years or older who possesses less than 5 grams of hash will only be guilty of a violation and a possible $100 fine, which rises with additional offenses. Possessing more than 5 grams or more of hash is a misdemeanor, which could cost up to $350 in fines and no more than one year imprisonment.

The cost for the medical marijuana evaluation and approval with Veriheal is $199, with a full guarantee if not approved. Unlike other states with medical cannabis programs, New Hampshire charges a $50 registration fee.

Does chronic pain qualify me as a condition in New Hampshire?

Do I have to be a resident of New Hampshire to attain a medical cannabis license?

What exactly do I need to qualify for a medical cannabis card in New Hampshire?

You must be at least 18 years of age and be able to provide residency with at least two forms of identification, including a driver’s license or state identification card.

What types of medical marijuana products can I buy at dispensaries in New Hampshire?

Places to Visit in New Hampshire After Enjoying Your Medicine

As one of the 13 original states, New Hampshire has unparalleled history in America's northeastern corner bounded by Canada, especially because of the state brand “Live Free or Die.” Bordered by Massachusetts, Vermont and the 16 miles of the Atlantic Ocean, New Hampshire is famous for Franconia Notch, the Old Man on the Mountain and Hampton Beach. Boasting a strikingly beautiful and elevated landscape, the Granite State is also famous for Mount Washington. With so many mountain ranges to climb, hike, and camp on, the state is a great place to soak in Mother Nature. Next time it is time to take a trip to the medical cannabis dispensary, take a detour to any of the below best places in New Hampshire for a guaranteed great day.

When it comes to visiting Mount Washington, it’s best to make more than a day of it with so many awesome area sites to see. In the winter, the famous peak boasts skiing, a canopy tour, sleigh rides, tubing, snowshoeing and guided adventures. In the summer, locals and visitors alike enjoy a canopy tour, archery, river tubing, scenic downhill and cross country biking, and climbing the West Wall. And all that is not enough, then area golf, shopping, or luxury spa time are available to enjoy.

Lost River Gorge, made up of caves and narrow passages, which can be accessed by a boardwalk or stairs. A woodland of flowers awaits visitors and locals who hike to the top in the afternoon. Once at the peak, trails through the forest and a suspension bridge delight those who spend the day at the site. For those that love to explore at night, lantern tours are available in the p.m. for visitors who want a little evening adventure.

Literally setting the bar high for all other North American aerial tramways, the New Hampshire is the U.S. 's first suspended sky ride. Since 1938, the sky adventure has carried millions across New Hampshire, giving an unforgettable view and experience of a lifetime. A little further south of the notch in the White Mountains is Flume Gorge, another awesome New Hampshire site to see.