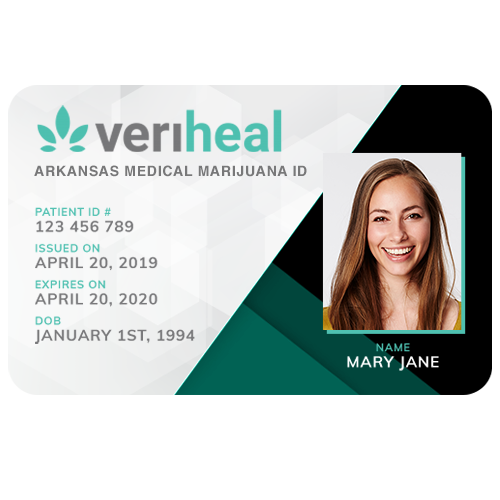 Apply for a Medical Marijuana Card in Arkansas

Talk to a licensed Arkansas medical marijuana doctor and get approved or your money back!

How to Get a Medical Marijuana Card in Arkansas

Didn't take as long as I thought - good compnay.

So happy that Arkansas finally has a program. Veriheal made things quick.

Overall rating: 5 out of 5 based on 3 reviews Submit a Review View All Veriheal Reviews

Watch this video to learn more about getting a medical marijuana card in Arkansas.

About Cannabis in Arkansas

Cannabis in Arkansas is concerned with drug cannabis in Arkansas, USA, where it has been illegal since 1923 for all reasons, and possession of tiny quantities is a crime of misdemeanor. An effort to legalize medical cannabis in 2012 failed with a 51.44% to 48.56% vote, but in 2016 medical marijuana was legalized.

The law enables seriously ill patients with a doctor’s permission to acquire and eat medical marijuana and creates permits for installations and dispensaries for state agriculture.

Arkansas is creating a strategy that could lead to the launch in early 2019 of the state’s medical cannabis program. In March 2018, Pulaski County Circuit Judge Wendell Griffen granted an order in a decision that the licensing method violated the 2016 constitutional amendment legalizing medical marijuana.

In June 2018, the State Supreme Court overturned that judgment, enabling the state to issue the permits formally. Following the lifting of the injunction, the Arkansas Medical Marijuana Commission has since granted permits to five (5) farmers. The committee selected Public Consulting Group in August 2018 to grade more than 200 dispensary requests it received and selected 32 winners to sell marijuana in Arkansas.

Patients will be able to buy up to 2,5 ounces or 70,87 grams of medical cannabis from one of up to 40 state-approved dispensaries for the Arkansas Medical Marijuana Amendment every 14 days. There are limitations on pain patients, but fresh circumstances can be added by the Arkansas Department of Health (ADH).

Where is it safe to purchase?

Dispensaries in Arkansas are not yet accessible. The state is creating a strategy that could lead to the launch in early 2019 of its medical cannabis program.

Patients with Arkansas medical marijuana may consume it only at home. Public consumption is not permitted. Currently, there is presently no permitted patient cultivation.

Prospective patients with medical marijuana in Arkansas may register online with the Health Department of Arkansas. A $50, non-refundable, fee must be paid by both patients and caregivers. Caregivers are also required to pay $37 for a background check.

To qualify, patients must be:

Medical marijuana is not qualified by members of the Arkansas National Guard and the United States Military.

Becoming a Caregiver in Arkansas

Becoming a certified medical caregiver for cannabis is a great chance for Arkansas nurses and home health care providers to incorporate cannabis into the treatment of patients. Patients and caregivers will be able to access laboratory-tested medical cannabis goods that can be titrated and incorporated into traditional therapies, such as chemotherapy, with adequate practice and education.

The Arkansas program has already recorded pediatric patients waiting for the opening of dispensaries. Pediatric patient parents and guardians are needed to become caregivers on behalf of their child.

A caregiver must be above 21 years of age (unless they are a qualifying patient’s parent) and have not been convicted of certain crimes of felony.

Arkansas enacted Issue 6 in November 2016 with the assistance of 53 percent of voters to legalize medical marijuana. Issue 6, also known as the Arkansas Medical Marijuana Amendment, provides a scheme for qualifying patients to grow, acquire and distribute marijuana. Patients must have a written certificate to obtain access to cannabis for medical reasons from a registered physician in the state. Cultivation at home is not allowed.

It is illegal in Arkansas to grow marijuana for recreational, medical or research reasons. In 2017, House Bill 1778 was endorsed by the Arkansas State General Assembly (which ultimately became Act 981), establishing the Arkansas Industrial Hemp Act. The legislation developed a study program to explore the hemp production’s environmental and economic potential. It enables the State Plant Board to allow growers to engage in a 10-year study program on industrial hemp.

Places to Visit in AR After Enjoying Your Medicine

Arkansas provides a mix of historical and natural attractions, culturally wealthy and endowed with abundant natural resources. Bordered by the mighty Mississippi River, the southern U.S. state of Arkansas is a favorite outdoor holiday destination for lovers who come to take advantage of the countless parks and wildlife regions.

Nestled in the Ouachita Mountains and surrounded by the natural warm springs from which its name derives, is an enticing holiday destination offering a variety of attractions. The city has a checked past that history buffs can learn about on a tour of America’s Gangster Museum and the Victorian Bath Houses on Bathhouse Row in 1888 (where you can still soak in the natural warm water).

At the Magic Springs Water and Theme Park, families can enjoy hours of fun or jump on a National Park Duck Tour or a Belle of Hotsprings Riverboat tour. Art enthusiasts can visit dozens of galleries and studios on the First Friday Art Walk through the Hot Springs Fine Arts District, while nature enthusiasts can enjoy fishing and water sports in Lake Ouachita State Park.

Little Rock, the capital of Arkansas, is an ideal holiday destination for the whole family, offering an excellent choice of attractions for all tastes and ages. History buffs will find plenty to see including the Presidential Center of William J. Clinton, the National Historic Site of Little Rock High School (a significant site in the struggle for civil rights), and the Old State House Museum.

If you enjoy historic architecture, you can walk through the historic Quapaw Quarter and art enthusiasts can immerse themselves in the lively arts scene by visiting the Arkansas Art Museum and the Arkansas Symphony Orchestra or watching a Broadway show. There are many family-friendly attractions, including a trip on the River Trail Trolley, a Little Rock Zoo visit, and the fantastic interactive Discovery Museum.

The main city of Bentonville was first created in 1836 and is likely best known as the retail giant Walmart headquarters. A walk through the town will take you to many other historical attractions, such as the Bella Vista Historic Museum, the Native American History Museum, and the beautifully conserved Peel Mansion Museum and Heritage Gardens, in addition to visiting the exciting Walmart Museum.

Art lovers will be encircled by public art installations while a visit to the American Art Museum of Crystal Bridges provides a senses festival. The town is particularly well equipped with cycling routes and paths, and there are several adjacent lakes and parks for hikers and lovers of water sports.