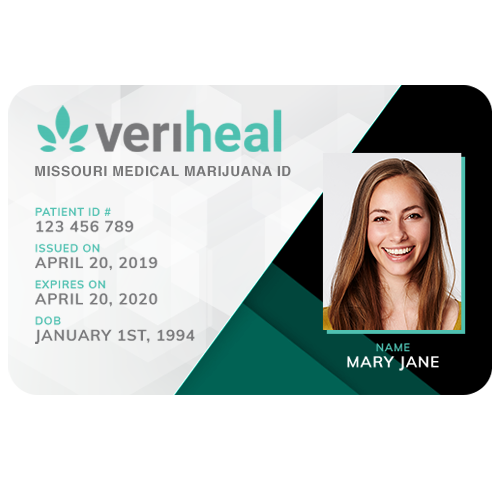 Apply for a Medical Marijuana Card in Missouri

Talk to a licensed medical marijuana doctor in Missouri and get approved or your money back!

How to Get a Medical Marijuana Card in Missouri

Schedule an appointment to see a medical marijuana doctor in MO through Veriheal at a time that is most convenient for you. Provide basic medical history and book your appointment with a licensed medical marijuana doctor. Medical records will only be required for patients who have conditions that can only be determined from previous testing; otherwise, they are not required.

Our team is on standby waiting to help you get a consultation date set. Please do not hesitate to reach out.

Consult with a doctor for 10-15 minutes to evaluate your ailments, and ask any questions you may have about medical marijuana treatment. After the appointment is complete and if you are approved, the doctor will fill out a recommendation form for medical marijuana; you will receive a copy of the form via email within 48 business hours. Once you have this you can then apply to the state.

Cannabis patients in Missouri must be able to prove their residency to be eligible for the program.

Once you are approved, you’ll register with the state and submit an application. The state will process your application and notify you of your approval and mail your card. Once you have your card in hand, you can begin purchasing from dispensaries when they open in Missouri.

In Missouri, patients will need to re-certify their license annually by seeing a licensed physician again. Veriheal will get in touch with you when your certification is approaching its expiration to help you set up a renewal consultation.

What You Get Using Veriheal in Missouri

Truly great things to say about Veriheal and the help they provide. Excited for our state to finally get this program moving quicker.

Beyond excited to have dispensaries opening finally. Just getting around to leaving this review but Veriheal made the process simple. Definitely recommend.

Was nervous to do this then I got very excited after the doctor helped ease my nerves with his professionalism and compassion so this is a great company!

Watch this video to learn more about getting a medical marijuana card in Missouri.

About Cannabis in Missouri

In 2018, 66% of Missourians voted to legalize medical marijuana; however, in August of 2020,  the state still had still not opened one medical dispensary for the nearly 60,000 qualified patients waiting to buy prescriptions for needed relief, reports The Joplin Globe.

“The number of Missourians granted medical marijuana patient cards has more than doubled from last year, but with ongoing delays because of factors such as COVID-19, many are left wondering when dispensaries will be open with products readily available,” according to the local Missouri news source.

Meanwhile, in January 2020, a letter from the Missouri Department of Health and Senior Services stated that, “it is a difficult reality that there is no legal method of initially acquiring marijuana, unless that marijuana is somehow discovered in the wild.” The letter goes on to argue that medical marijuana cardholders have the right to possess marijuana.

Residents waited until the tale end of 2020 before medical cannabis hit the shelves for purchase by medical marijuana cardholders. As of now, patients actively have access to several dispensaries across the state.

Missouri began its medical marijuana program in 2018 with a lengthy list of qualifying conditions, unlike some states that start with a short list and add more conditions as time goes on. According to the Missouri Department of Health & Senior Services, qualifying patient conditions include:

Along with having a qualifying condition, applicants must provide proof of residency in Missouri with a valid state driver’s license or ID card. In addition to Veriheal’s consultation fee of $199, the cost for a Missouri medical marijuana card is $25, which must be renewed annually to stay valid in the statewide registry. Recommendations must also be renewed annually.

Registering a Primary Caregiver in Missouri

To be a caregiver for a Missouri resident, they must also be a resident of the state and be able to provide proof of residency with a valid driver’s license or ID card . They must also be added to the patient’s medical cannabis certification application as the listed primary caregiver. In the state of Missouri, caregivers are allowed to assist three patients at a time. Additionally, a patient can have up to two caregivers in Missouri.

Possession and Cultivation of Medical Marijuana in Missouri

State law limits the purchase of medical marijuana to 4 ounces every 30 days.

For an additional $100, cannabis patients may apply for the patient cultivation identification card. Missouri law specifies that up to two individuals who have patient cultivation ID’s may cultivate medical marijuana in one space. The two individuals may be two patients, two caregivers, or a patient and a caregiver. Up to 12 mature, flowering cannabis plants may be cultivated in this situation. Additionally, there may be up to 12 immature, non-flowering plants and 12 clones. Note that if one of the individuals is a patient as well as a caregiver then the number of plants increases to an additional 6 mature plants, 6 non-flowering plants, and 6 clones.

Do I have to be a resident of Missouri to attain a medical marijuana license?

Yes, all applicants must provide a Missouri state issued driver’s license or identification card to prove their place of residence. Otherwise, they are not eligible for a medical cannabis card.

What is the first step to getting a medical marijuana card in Missouri?

The first and most important step is to schedule a physician appointment with Veriheal. You will need to upload your medical records. After the appointment and if you are approved, the physician will recommend certification for medical marijuana treatment.

How long does it take to get a Missouri medical marijuana card?

The initial consultation with a licensed physician usually takes 10-15 minutes. From start to finish the process can take at least 2 – 3 weeks and that includes initial appointment, applying with the Department of Health and Senior Services (DHSS), and finally receiving your card.

What if I am not approved for medical cannabis in Missouri?

Veriheal has helped many patients in Missouri and has a very high approval rate for medical cannabis licensure; however, if you are not approved, you will be refunded in full.

Is chronic pain a qualifying condition for the Missouri medical marijuana program?

Places to Visit in Missouri After Enjoying Your Medicine

Home of The Gateway Arch, the Show-Me-State boasts a renowned botanical garden, as well as Silver Dollar City, an 1880’s Ozark-themed amusement park. Be it deep in the Meramec Caverns or in the vast and open Forest Park, it’s possible to explore many sides of Mother Nature in Missouri. The state is also famous for the St. Louis and Kansas City Zoos. For history’s sake, Missouri also boasts the Cathedral Basilica of Saint Louis and the Titanic Museum Attraction. When Missouri manages to begin selling medical cannabis by the summer of 2021, taking a detour on the way to any of the statewide dispensaries to one of the below best places is a great idea.

With so many places to stop in St. Louis, the three most notable may just be the zoo, science center, and museum, all named after the city on the border of Missouri and Illinois. Beyond animals, scientific discovery, and history, St. Louis also offers the iconic Gateway Arch in the center of the mini-metropolis. What is called an “engineering marvel,” by U.S. News & World Report, the stainless steel arch of 630 feet is a must see when in town. In 2018, the state invested in a set of galleries underneath the famed sculpture that detail the history of the western expansion landmark.

Shopping, eating, and enjoying live entertainment are just some things locals and visitors do in Silver Dollar City. The Branson-based theme 1880’s theme park also boasts Marvel Cave, a cavern famous in the mining town. Planetware reports that “the cave was first discovered by the Osage Indians in the 1500s and since that time has attracted explorers looking for the Fountain of Youth, miners of marble and bat guano, and archaeologists.”

Still renowned for hosting the 1904 World Fair more than a century later, Forest Park still boasts 1,300 acres of urban parks filled with ponds, gardens, and up to 45,000 trees. Within the park, the St. Louis Zoo and Science Center and the Missouri History Museum are open for visitors to enjoy. Lastly, Forest Park has endless entertainment at America’s oldest and largest outdoor musical venue called The Muny.