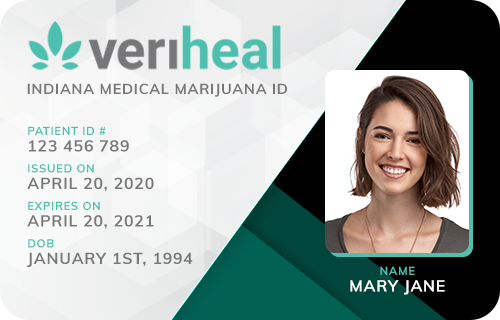 Meet With a Medical Marijuana Doctor in Indiana

It looks like we are not currently helping patients in Indiana to get their medical marijuana cards. However, you can easily join our waitlist to be notified when we're booking appointments in your state.

You can also take advantage of our Personalized Consults as an Indiana resident to better understand how cannabis and CBD may be helpful to you.

How to Get a Medical Marijuana Card in IN

In Indiana, patients will need to re-certify their license annually by seeing a registered physician again. Veriheal will get in touch with you when your certification is approaching its expiration to help you setup a renewal consultation.

The Status of Cannabis Legalization in Indiana

The Hoosier State is the hardest critic when it comes to legalizing cannabis medicinally or not, making it one of 19 states that simply will not budge when it comes to considering the positive effects of the plant’s properties. While dozens of states have decriminalized cannabis, expunging records and trading arrests for fines, Indiana charges a misdemeanor for possessing small amounts of marijuana.

The IndyStar reports that based on the word of Sen. Karen Tallian, who sponsored three marijuana reform bills, Indiana’s second-largest number of arrests are from marijuana possession, with more than 22,000 convictions in 2018.

“Maybe we’re not putting people in jail in every county,” Tallian told the IndyStar. “But 22,000 arrests is a lot of court time, and a lot of these people will still end up with a criminal record.”

The only progress the Hoosier State has had on cannabis consideration was in 2017 when Gov. Holcomb signed HB 1148, which allowed citizens with epilepsy to consume cannabis oil legally. Without any compassionate care law, which allows for the medical use of cannabis in severe conditions, Indiana denies any form of cannabis except for low-THC CBD derived from industrial hemp.

While Gov. Eric Holcomb refuses to legalize the drug until it is cleared by Congress, in 2018, he signed Senate Enrolled Act 52, permitting any citizens to purchase, possess, or sell CBD oil that does not exceed 0.3% THC and meets all approved labeling regulations.

While cannabis remains a Schedule I drug under the Indiana Criminal Code, the state will continue to penalize anyone for the possession of cannabis. If found with up to 30 grams of cannabis, citizens are charged with an a Class A misdemeanor, which could carry charges including up to one year in jail and a fine of up to $5,000.

If any person, resident or not, possess more than 30 grams, and a prior marijuana conviction, the charge becomes a class D felony, punishable by up to three years in prison, a fine of up to $10,000, or both. If a person is found growing, manufacturing, and distributing cannabis in Indiana, charges are even more strict.

The only qualifying condition the Hoosier State considers eligible for low-THC oil is epilepsy. The rejection of all other conditions gives Indiana an F for effort when it comes to its statewide medical cannabis program, based on Americans for Safe Access’s annual national report card.

“Hoosier State lawmakers made no progress in helping Indiana patients secure safe or legal access to cannabis in 2020,” reports the Americans for Safe Access.

The Washington-based group also reports that state officials need to broaden the list of qualifying conditions and delete “arbitrary caps on THC content in cannabis-related medications and organize a fully functional medical cannabis production and sale system for patients to access.”

With no actual program in place, the Hoosier state does not charge annual medical card holder registration fees for the small epipleptic population that uses low-THC oil to treat their condition.

It is illegal to cultivate or possess any form of medical cannabis in Indiana.

Until medical cannabis is legalized in full, the state of Indiana does not have caregiver requirements for assisting patients with medical cannabis. Those who may assist epileptic patients in administering or applying low-THC oil is a private matter uninterrupted by the government.

I am a qualified patient, how do I go about getting an Indiana medical cannabis card?

Until the state legalizes a program, it is not possible to attain a card. But when they do, our team will be available to set you up with a physician who can evaluate your health and confirm your condition.

Veriheal provides the physicians for you, which is the most difficult part of the process. After meeting with a certified doctor in a virtual video consultation from the comfort of your own home, the doctor will determine your eligibility based on a qualifying condition.

Do I have to be a resident of Indiana to attain a medical cannabis license?

Yes. When a program is in place, a prospective patient must provide proof of residency in Indiana as part of their application for a medical cannabis license.

Places to Visit in IN After Enjoying Your Medicine

A family-friendly state, Indiana is known for the Children’s Museum of Indianapolis and Holiday World & Splashin’ Safari. Indiana is at the heart of midwest America, with with cornfields and small communities of locals. Between Fort Wayne, Bloomington, and Lafayette, the Hoosier State has educational excitement in several select museums, not to mention the fun to be found on the University of Notre Dame Campus. Some state sections hundreds of miles away from any coast offer a seashore feel at the Indiana Dunes National Lakeshore, where locals and visitors alike camp out after spending the day fishing, swimming, kayaking, and hiking. When Indiana decides to move forward with a medical cannabis program statewide, many more traveling opportunities will present themselves, giving locals a chance to explore parts of their state they never knew existed, especially at some places below.

Celebrating Western Art with original Georgia O'Keeffe and Fredrick Remington artwork, the renowned gallery is also the entrance to White River State Park. The adjacent Indiana State Museum gives patrons a chance to peruse through a plethora of art in all forms, including interactive exhibits. Across the White River is the Indiana Zoo, turning a day of museum hopping into an animal adventure. The family-friendly region gives adults and adolescents a chance to learn while having fun indoors and outdoors any time of the year.

Beyond being an iconic American higher education institution, the University of Notre Dame is also home to one of the most notable football stadiums in the U.S., Basilica of Sacred Heart, Grotto of Our Lady of Lourdes, Morris Performing Arts Center, and Riverwalk. Students mix with locals when not studying, making up a diverse community of young and senior intellect. The nearby Boehm Park and Potawatomi Zoo offer family fun and fresh air in the day, while the River Lights Plaza less than two miles from the campus lights up night time entertainment.

The Children’s Museum of Indianapolis

You don’t have to be underage to be in awe at the Children’s Museum of Indianapolis. Almost 30 acres of exploration, the American midwestern museum is the most extensive global gallery. Visitors worldwide bring their families to the site that features colossal sized dinosaur bones and a replica of the International Space Station. Interactive games, tours, and demonstrations keep patrons entertained for hours, with some staying overnight nearby to enjoy the famous museum two or three days in a row. On the second and third day stay, many explore the “Tree of Sports,” playground for hours alone, when not hiking through the interactive preschool playground.