Talk to a licensed Oregon medical marijuana doctor online and get approved or your money back!

How to Get a Medical Marijuana Card in Oregon

Consult with a doctor for 10-15 mins online to evaluate your ailments, and ask any questions you may have about medical marijuana treatment. After the appointment is complete, the doctor will fill out a recommendation form for medical marijuana and approve you. Once you have this you can then use that to apply to the state.

In Oregon, patients will need to re-certify their license annually by seeing a licensed physician again. Veriheal will get in touch with you when your certification is approaching its expiration to help you setup a renewal consultation. 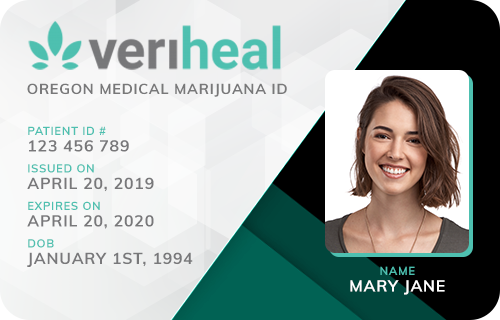 Watch this video to learn more about getting a medical marijuana card in Oregon.

What You Get Using Veriheal in Oregon

The Status of Cannabis Legalization in Oregon

Oregon was one of the first states to legalize medical cannabis back in 1998, two years after pioneer California broke the mold in 1996. Now one of the 11 states to permit both medicinal and recreational, and the first to decriminalize small amounts, the Beaver State has made cannabis utterly available to all citizens, in good health or bad. More than 20 years later, Oregon exceeded product sales with the Bulletin reporting $100 million in sales three months in a row, directly related to the COVID-19 virus quarantine, proving medical cannabis indeed alleviates anxiety.

Individuals who wish to participate in the medical cannabis program must register with the OHA to become eligible. Patients with a qualifying medical condition and a recommendation for medical cannabis from an attending physician may apply for a medical marijuana card online.

Oregon charges patients $200 for new applications and renewals, and also offers reduced fees for citizens in need of financial assistance. The charges only $60 for persons receiving state food stamps, $50 for residents who fall under the Oregon Health Plan, and $20 for persons receiving SSI benefits or members of the U.S. Military.

In Oregon, the state allows caregivers to be at least 18 years of age, as opposed to some states that mandate 21 years of age. Like a patient, caregivers must also prove that they are a resident of Oregon with a valid driver’s license or state identification card. Any caregiver requested must be listed as the patient’s particular assistant to be considered.

Any Oregon resident, caregiver or not, that cultivates or processes medical cannabis must undergo a background check. The cost of the mandatory background check is $35, and if approved a $200 payment for a cultivation license must also be paid. A grower must be at least 21 years of age, and is not allowed to cultivate cannabis for more than eight patients at a time, with six flower plants per patient.

The cost for the medical marijuana evaluation and approval with Veriheal is $199, with a full guarantee if not approved. The state of Oregon charges an additional $200 for an annual registration, but offers reduced rates for residents who receive food stamps or SSI.

Does chronic pain qualify me as a condition in Oregon?

Yes; however, in Oregon it is called severe pain.

Do I have to be a resident of Oregon to attain a medical cannabis license?

Yes. To be approved for a medical cannabis license in Oregon an applicant must provide either a state license or identification card to prove their residency.

What exactly do I need to qualify for a medical cannabis card in Oregon?

You must be at least 18 years of age and be able to provide residency with a current driver’s license or state identification card.

What if I am not approved for an Oregon medical cannabis card?

If you are not approved then your consultation is free. Veriheal has a network of highly qualified medical practitioners who are willing to evaluate any patient for medical cannabis. We have a very high approval rate so if you are not approved, you are refunded in full

Places to visit in Oregon

Located in the Pacific Northwest, Oregon touts some of America's most gorgeous terrain with Crater Lake National Park, Multnomah Falls, and Canyon Beach. Beyond the beauty of Mother Nature, Oregon's cities of Portland, Newport, and Salem. Locals and visitors enjoy the endless outdoor and indoor activities off the Oregon Coast Trail, 360 miles of terrain on the state's western edge. While some explore Oregon from the outside by scenic byway tours, kayaking, hiking, fishing, camping, skiing, snowboarding, and more, others take in the Beaver State by way of cities up and down the coast, including Bend or Astoria, the backdrop of 80's pop culture film Goonies. Next time a trip to the dispensary is scheduled, carve out some extra time to stop at any of the best places below for some afternoon adventure with friends like the classic film.

The deep blue waters surrounding remnants of a volcano at Crater Lake National Park are stunning. The national park has up to 30 overlook views that can be accessed by foot, bike, boat or trolley tour. There are up to 90 miles of hiking trails to be explored at Crater Lake, with backcountry camping available for an overnight rest. Scenic rim drives are also available for those who prefer to see the sites by car. Adult and adolescent ranger programs have patrons exploring all parts of the park for some fun-filled education.

Oregon’s largest city, Portland, is most famous for Washington Park, which hosts a field of Japanese flowers and the International Rose Test Garden. Mansion. After enjoying the city's outdoors, visitors and locals alike love to stop by Powell’s City of Books, the famed three-story building big as a square block. Downtown galleries including the Oregon Museum of Science and Industry and Portland Art Museum also make up city culture along with top-rated restaurants and bars.Crater Lake National Park sits in the Cascade Mountains of southwest Oregon, with a landscape like nowhere else. In fact, it is not a crater, but rather an ancient caldera of an extinct volcano, Mount Mazama, and its lava cliffs rise to altitudes of up to 2,000 feet around the intensely blue and extremely deep lake. Rim Drive circles the lake in a clockwise direction just a short distance from the crater's bottom. It starts at Rim Village and is accessible only by vehicle during warm weather months. Snowshoers and cross-country skiers will use the unplowed highway for winter travel in the winter. Crater Lake National Park is a popular weekend trip to Oregon, and camping is accessible on two established campgrounds, with most of the Mazama Campground sites being found. Extended hiking and backpacking opportunities can be found away from the rim in the national park, and spectacular trails such as Watchman Peak offer great views of the caldera. In the summer months, head to Cleetwood Cove to discover the lake itself, from where cruises depart for Wizard Island.

The revamped fishing village now a beach resort is home to the Oregon Coast Aquarium, and award-winning marine world. Migrating whales pass by Newport, giving locals and visitors alike glimpses of of the giant sea creatures. Newport’s historic bayfront is also a site to see leading to the Oregon Pacific Coast Scenic Byway. Marine discovery tours in town show off local seals and sea lions along with whales. Theater, music, and art are also available in town at the Newport Performing Arts Center. Most end the day in town at the Nye Beach cafe, famous for its Pacfic Coast view and food.The majestic Multnomah Falls are a must-see attraction for those who are in Oregon's Mount Hood / Columbia Gorge area. The falls can be reached on Portland's I-84 in just 30 minutes. Legend has it that the falls once provided a very private bathing spot for a princess, but everybody can enjoy the sight of this impressive natural masterpiece today. You can see part of the 611-foot falls from the highway, but you'll need to take a five-minute walk to the mist-shrouded base of the falls to get the full picture. A quick climb from there will take you to the Benson Bridge which offers a great viewpoint.