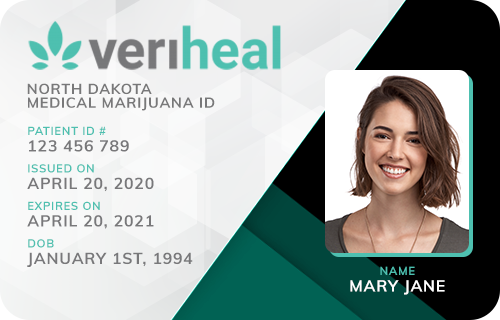 Meet With a Medical Marijuana Doctor in North Dakota

It looks like we are not currently helping patients in North Dakota to get their medical marijuana cards. However, you can easily join our waitlist to be notified when we're booking appointments in your state.

You can also take advantage of our Personalized Consults as a North Dakota resident to better understand how cannabis and CBD may be helpful to you.

How to Get a Medical Marijuana Card in ND

In North Dakota, patients will need to re-certify their license annually by seeing a licensed physician again. Veriheal will get in touch with you when your certification is approaching its expiration to help you setup a renewal consultation.

The Status of Cannabis Legalization in ND

Cannabis in North Dakota was legalized for medical purposes in 2016 but remains illegal for recreational purposes. Possession of small recreational amounts is a misdemeanor crime.

Once given a doctor’s recommendation, North Dakotans may purchase at their nearest dispensary storefront or order for delivery when those businesses are accessible, but cannot be consumed in public.

While North Dakota has a medical cannabis program initiated by a ballot question in 2016, with up to 67% percent of residents voting for the measure, the Peace Garden state does not have a recreational use program in place. Legalize North Dakota, a citizen-run group, was so close to having a ballot question about for the 2020 General Election, but came up shy signatures due to COVID-19 quarantine.

Determined, the grassroots group, has not given up – still hoping to have a referendum question on can go on the 2020 election ballot instead. While the group has till the beginning of December 2020 to have their petition submitted, the state’s medical cannabis program offers residents who are eligible for the statewide program a chance to take the medicine that has proven to alleviate dozens of debilitating conditions.

As one of 33 states with a legal medical cannabis program, but still not yet one of the 11 states with recreational use, North Dakota remains on the line, which is moving back with each election cycle.

Unlike most states where patients are considered underage until 18, North Dakota adds a year to that, making patients applying for themselves to be at least 19 years old. North Dakota has a detailed list of qualifying conditions, first listing a terminal illness as immediate approval for a medical cannabis card. Other conditions include:

Additionally, North Dakota deems any chronic or debilitating disease or medical condition or treatment for such disease or medical condition that produces one or more of the following including cachexia, severe debilitating pain that has not responded to previously prescribed medication or surgical measures for more than three months or for which other treatment options produced serious side effects.

Lastly, a patient who is at least 19 years old and has one or more of the qualifying conditions, must be able to prove they are a North Dakota resident by providing a valid state driver’s license or identification card. The patient must also pay a $50 annual card registration fee.

North Dakota offers an array of medical cannabis products, permitting patients to possess up to 2.5 ounces of dried flower every 30-days without penalty. North Dakota also has other forms of medical cannabis products patients can possess, also permitting patients to have up to 4000 mg of total THC products. There are no cultivation laws in North Dakota, so patients must purchase the various types of permittable THC-infused products from state-run dispensaries.

Places to Visit in North Dakota After Enjoying Your Medicine

Between Theodore Roosevelt National Park, Fort Abraham Lincoln State Park, and Knife River Indian Villages National Historic site, North Dakota touts serious American history in the land of the Great Plains. The midwestern state, home to Yellowstone River, is bordered by Canada in the north, giving locals and visitors the most arctic U.S. experience possible. Along with national parks and historic sites, North Dakota is decorated with hidden gems including The Enchanted Highway, the World’s Largest Buffalo, and several notable museums focusing on art, children, and aerospace. Needless to say, winters in North Dakota are cold, which is perfect for outdoor sports in the day, and staying warm in Fargo at night at some of the cities hottest restaurants, bars, and clubs.

Fargo is a great place to visit, especially for fans of the Cohen brother, the famous siblings who wrote and directed the famous 1996 film about the region, which turned into a top Fox series. Culture is on every corner in Fargo, the largest city in North Dakota. Between the famed Plains Art Museum, an old warehouse made into a fine-arts space, downtown eating and entertainment venues, Yunker Farm, and the Red River Zoo, it’s easy to spend a day in the mini-metropolis. The city also hosts annual events including the Big Iron Agricultural Show, Cruisin’ Broadway, and yearly Fargo festivals including a blues music, film, and arts gathering. With so many fantastic places to visit in Fargo, there is no reason not to take a detour on the way to the dispensary.

Reconstructed military buildings and a replica of the Mandan On-A-Slant Indian Village, take visitors back in time at Fort Abraham Lincoln State Park. Historians and fans can frequent the home of Lt. Col George General Armstrong Custer and walk through the Five Nations Art Gallery, filled with cultural artifacts for sale including jewelry, sculptures, painted buffalo skins, dreamcatchers, and locally sewn quilts. The park is equipped for overnight stays, with up to 95 campsites, dozens of picnic tables and outdoor activities including horseback riding, fishing, and hiking.

Based in Bismarck, the North Dakota Heritage Center gives locals and visitors alike a glimpse into both the modern and prehistoric North Dakota. The Northern Lights Atrium, is an awesome section of the museum, as well as the views offered on the Capital Arboretum Trail. With four different museum galleries, and outdoor exhibits, spending a day in exploring the state’s past makes the present so much more fun.