A Complete Guide to Popular Cannabis Smoking Pipes and Devices 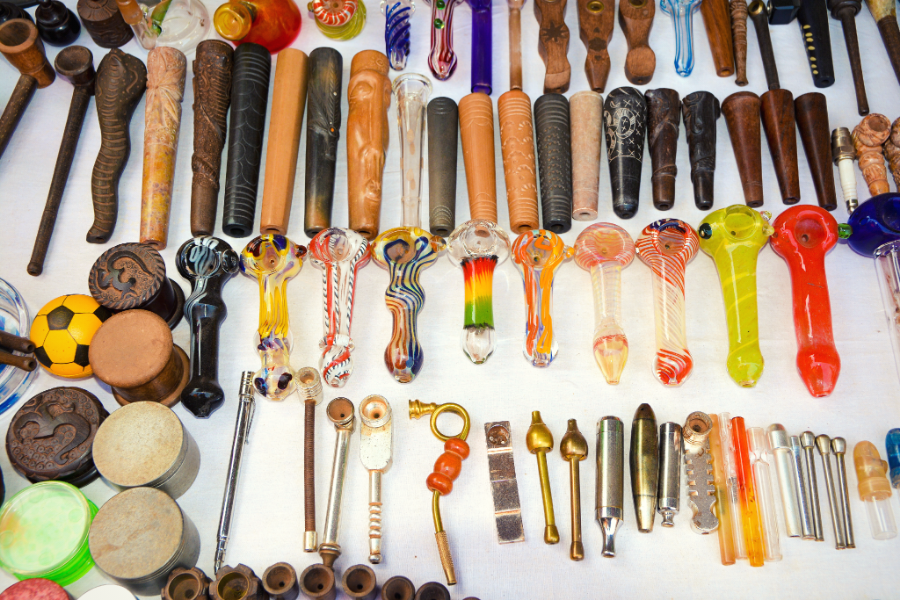 One of the most exciting parts of smoking cannabis is being able to collect pipes, and discovering new ways to smoke. This can change up your daily routine and are just fun to try. If smoking papers, such as blunts and joints, isn’t your thing, there are plenty more options! They all differ in shape, size, price, and color, but they all intend to do one thing: get you high. Here are some pipes and pieces that will be a good alternative to smoking paper.

This is the most commonly used pipe for cannabis smokers. It is small, easy to use, and comes in many different fun shapes and sizes. There are so many different styles of pipes that it has almost become a collector’s item. In fact, you can get a hand pipe in the shape of almost anything. Baseball bat? Giraffe? Grenade? You can find one somewhere. These pipes have been around for centuries, passed down by ancestors from every culture who smoked tobacco/ herbs. Variations of the hand pipe include ceremonial pipes (Native American), chalices (Rastafarian), chibouks (Turkish), chillums (India), kiserus (Japanese), midwakhs (Arabian), and sebsis (Moroccan).

There are two versions of cannabis water pipes, depending on the size. The most common version of a water pipe is the larger version, which is known as a bong. These all generally look the same but can differ in size, height, and add-ons. On the other hand, bubblers are the smaller version of a water pipe. These are almost like a crossbreed between a hand pipe and a bong. Imagine a hand pipe with an extra water chamber. No matter the size, the point of adding water is to cool the water down, creating an easier smoking experience.

The last common way to smoke cannabis recently has been the use of vaporizers. As it’s named, these devices vaporize THC-infused wax in the form of a cartridge and vape battery or dry herb flower inside of a convection heating device. This makes it the most convenient way to smoke cannabis. Because cannabis is vaporized, the smell isn’t as pungent. Unfortunately, the unregulated market has been ruining this amenity. Recently, several deaths have come from unregulated vaporizers. If you choose to smoke via a vaporizer, buy your cartridges from an authorized dispensary to be safe.

Glass blunts are perfect for those who still want to have the “smoking a joint” experience without having to smoke any type of paper. Exactly as it sounds, it’s a glass piece in the shape of a blunt. Inside of the glass blunt is spiral holding space for the cannabis, and when you twist the end, a little cannabis is twisted to the top. Imagine a glue stick pipe with cannabis inside.

Now cannabis can be smoked as a wax concentrate as well. These waxes are typically much higher in THC percentage and require their own individual smoking devices. The most popular one used to smoke wax is known as a dab rig. They look similar to bongs (and can actually be modified into one with a standard bong body), except with a dab nail instead of a bowl piece. Heat the dab nail with a hand torch and apply the wax onto it once it reaches the proper temperature. These are for the much more experienced cannabis smokers who are looking to take their high to the next level.

If the wax version of a bong is known as a dab rig, then the wax version of a pipe would be known as a nectar collector. These easy to use devices are the most recent way to get high with cannabis wax. Simply apply heat with a hand torch onto the narrow end of the pipe piece, similar to a dab rig. Once the tip, which is usually glass or metal, is at the proper temperature the smoker applies the hot tip onto some wax. This looks like you are sipping smoke from a straw, but it is much easier to use than a dab rig.

Steamrollers are not as popular as some of the other pipes on this list, but they are fun if you want a quick rip similar to a bong. Imagine a nectar collector with a bowl piece on the top. Plug the hole at the end of the piece and slowly light the cannabis until the pipe chamber is filled with smoke. Once you’ve reached the desired amount of smoke, you remove your finger/ hand from the hole and inhale all of the smoke in one swift inhale. It’s another crossbreed of a bong and a handpiece,