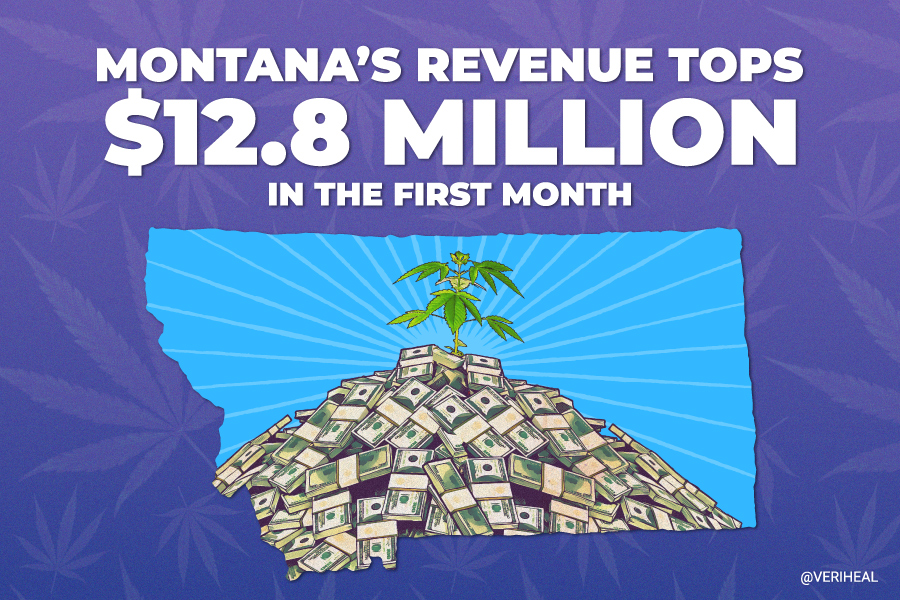 Montana’s adult-use cannabis industry is on track to yield $130 million—a sales prediction made by the Governor’s budget office—in its initial year of operation. Adults age 21 and over have been legally allowed to purchase a maximum of one ounce of recreational cannabis in Montana since January 1, 2022. Based on the latest revenue results, the “Big Sky Country” generated $12.8 million during its launch month.

Sponsored by New Approach Montana in conjunction with the Marijuana Policy Project, Montana’s recreational cannabis law has been received well by consumers. On opening weekend, the state’s newly legal adult-use market accounted for $1.5 million of the month’s total sales.

Furthermore, data released by the Montana Department of Revenue indicates that statewide recreational cannabis sales remained level through the month of January–resting somewhere between $2.6 million and $2.9 million on a week-after-week basis. Taking into account Montana’s medical cannabis sales from January, which amounted to $9.7 million, the Department Cannabis Control Division recorded $2.9 million in tax revenue within a 31-day period.

Should things go as planned this year, the Governor’s Office of Budget and Program Planning could be celebrating the fruition of its $130 million sales projection for 2022. Montana’s adult-use market is projected to generate $195.5 million by 2023—a prediction that is likely to transpire once the moratorium on new businesses comes to an end.

Lawmakers chose to delay the rollout of Montana’s adult-use cannabis program as a way of granting medical cannabis industry owners a chance to assess the recreational market before larger out-of-state corporations swoop in. Obtaining a license to operate a cannabis business in Montana is not exactly a tricky task. While it may prove appealing for “cannapreneurs” that want a slice of the pot pie, the straightforward licensing process is not exactly ideal in terms of gaining a competitive edge.

In fact, the market is considered to be fairly oversaturated, not to mention over-regulated and overtaxed. Nonetheless, for businesses that have already found their feet in Montana’s medical cannabis market, staying afloat is easier. Why? Because they maintain eight years of experience and get first dibs on the new market.

What to Expect from Montana’s Adult-Use Cannabis Market

Included in the list of people who have been legally allowed to participate in Montana’s adult-use cannabis program since the market kicked off on January 1 are state residents, international travelers who possess valid identification, and the residents of other American states and territories.

Customers are spoiled for choice in terms of what they can purchase at Montana’s licensed cannabis dispensaries. Examples of the retail goods being sold inside licensed stores include cannabis flower—with THC potencies ranging from around 15%-25%, but not exceeding 35%—infused oils, infused edibles, topicals, tinctures, and vaporizer cartridges.

Only Montana-produced goods can be sold by the state’s recreational cannabis dispensaries, where customers are limited to purchasing one ounce of any product per transaction. Conversely, customers can buy the THC equivalent in various forms, e.g. eight grams of concentrate or 800 milligrams of edibles.

A flat 20% sales tax is imposed on sales from Montana’s adult-use cannabis program, with the initial $6 million in revenue earmarked for the Healing and Ending Addiction through Recovery and Treatment (HEART) Fund.

Introduced by Gov. Greg Gianforte, the proposed HEART fund is a new program that seeks to assist people who struggle with addiction and substance abuse. Once the program has received adequate funding, the remaining funds will be distributed as follows: