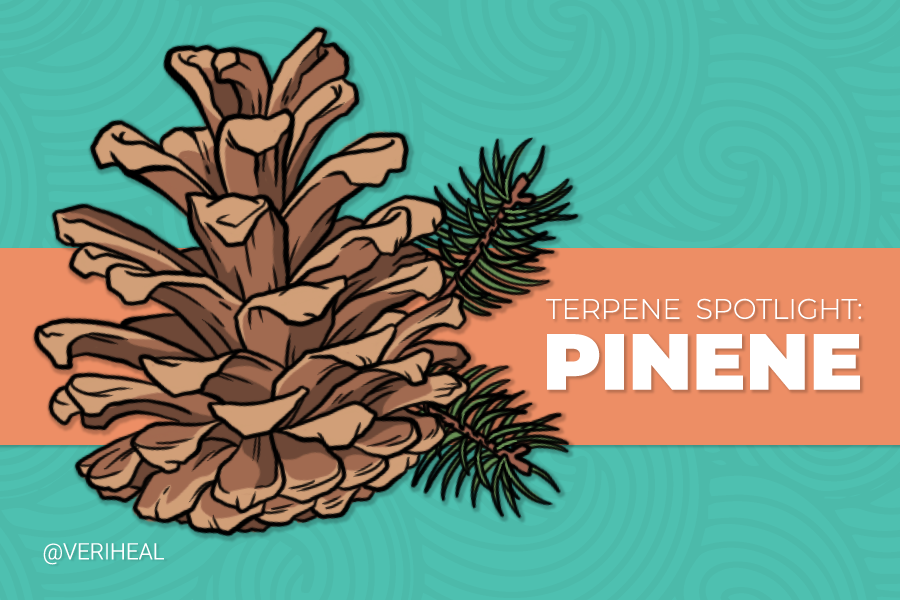 The aroma coming from cannabis seems to attract many customers as an array of soothing scents are offered by different strains. The same glands producing those smells, also produce the variety of color found on cannabis buds (or flowers), and these glands are called terpenes. They can produce a variety of distinctive flavors such as citrus, pepper, and earthy. Which brings us to the Terpene in the spotlight… Pinene.

Pinene happens to be one of the most researched terpenes found in cannabis. This terpene comes in two varieties called ‘alpha-pinene’ and ‘beta-pinene’. The latter, beta-pinene, gives off a basil, dill, hops, and parsley aroma while the former, gives off pine needles and rosemary aroma. Alpha-pinene, in all of its pine and rosemary glory, is significantly more common in cannabis.

Pinene terpenes can be found in literally hundreds of other plants including, but obviously not limited to: basil, cedar, dill, eucalyptus, oranges, parsley, and pine trees. Similarly, pinene-rich cannabis can be found in many strains including all types of cannabis (Indica, Sativa, and Hybrid). To top it all off, it has its own benefits when it’s consumed. 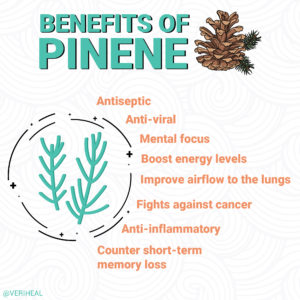 Strains That Are High in Pinene

The medicinal efficacy of Pinene has been the focus of several studies for many conditions ranging from cancer to pain and epilepsy. Let us have a look at some of the available research on the terpene.

It must be made known that individual terpenes are typically consumed in tandem with other terpenes, which is the reason for the term ‘entourage effect’. The research paper from Ethan Russo provides a comprehensive look at the interactions between cannabinoids and terpenes. Russo stated that the entourage effect accounts for the manner in which cannabinoids and terpenes influence each other and modify one another’s effects.

The paper essentially states that terpenes can modulate the effects of cannabinoids. This means that the terpenoid composition in cannabis allows the terpenes to direct the type of high/effects. A full and strong terpene profile is believed to enhance and amplify the medical benefits accompanied by the cannabinoids in cannabis. By containing Pinene, it can direct the medical benefits of that strain towards the list of associated benefits listed above.

Pinene, one of the most well-researched and most common terpenes found in cannabis, is promising in its medicinal benefits and is responsible for the wonderful forest-like aroma coming from the buds containing it. If you haven’t given much thought into terpenes, I suggest that you start off by trying one of the recommended high-in-pinene strains and see the results for yourself.

Dam. I gna call you the Bud Angel !

Cannabis strains have a multitude of different names. The names are a way to help identify different varieties of cannabis genetics. The…

Have you ever wondered whether one can be allergic to cannabis? Some may laugh at the suggestion of one being allergic to…