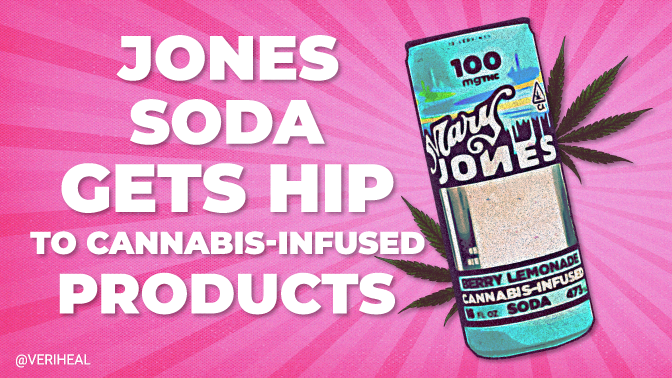 Jones Soda is heading into uncharted territory with the launch of its new cannabis-focused brand, Mary Jones. The new brand will be available in California dispensaries starting April 1, but the company plans to eventually expand into all cannabis-legal states.

At launch, Mary Jones will feature four different product lines, including 16-ounce cans of soda infused with 100 milligrams of cannabinoids, bottles of syrup with 1,000 milligrams, and soda bottle-shaped gummies infused with 5 milligrams.

Jones Soda marketing chief Bohb Blair said he hopes the move will help differentiate the small company from its bigger competitors. To date, industry giants like Coke and Pepsi have opted to stay away from cannabis due to its federal illegality. With these industry leaders out of the way, Jones Soda believes its new brand will quickly gain traction in a largely untapped market.

“We’re a small player in soda, but we’re going to be the biggest national player when it comes to a recognizable [consumer-packaged goods] name in cannabis,” Blair said in an interview.

Following its California launch, Jones Soda already has plans to push its new brand even further. “If we crack it in California, we’re going to do gangbusters as we go through the Midwest and East,” continued Blair. Don’t be surprised to find Mary Jones’ canna-soda at your local dispensary in the very near future.

What do you think of Jones Soda’s bold plan to move into cannabis? Will you be giving one of their sodas a try? Let us know in the comments!