Home News Ediblocked: Why Can’t Some People Get High From Edibles?

Have you ever shared some edibles between friends, only to discover that one of you is feeling nothing at all? Well, Al McDonald has. The Boston Globe presented Al McDonald’s story as an example of a situation where a group of friends shared “a strong batch of pot-infused cookies” but he “got absolutely nothing from them”. McDonald even stated that he sat there like “aww man… everybody’s Hoverboard works except for mine”. McDonald represents the group of people who have a hard time getting high from edibles, which seems to have stumped scientists.

People Who Are ‘Ediblocked’ Are Unaffected by Edibles

McDonald forms part of an “unknown portion of the population that appears to be functionally ‘immune’ to edibles, or at least has exceptionally high tolerances”. The Boston Globe describes this group of people as being “ediblocked” but also explains that when they smoke cannabis, they experience it as normal. Persons who are classified as ediblocked are said to be able to consume quantities of cannabis that would send the majority of people on an intense trip, while they experience nothing.

McDonald was reported to have engaged in a rather “reckless experiment” where he consumed hash tea and only began to feel something at around 700 milligrams of THC. To put that in perspective, 700 milligrams is 140 times the “standard serving in Massachusetts of 5 milligrams”. Additionally, it is recommended that consumers of cannabis begin with 1.2-5mg of THC as well as capping it at 10mg under normal circumstances in order to minimize adverse effects associated with high THC potency. Cannabis should contain around 10% or less THC to be considered effective, low-potency, and a lower risk of adverse effects such as increased anxiety.

The Boston Globe goes on to explain that researchers and medical professionals are aware of and acknowledge the phenomenon of being ‘ediblocked’ but are not able to “definitively explain it”. They also explain that this can have “serious implications for dosing in medical marijuana treatment” as well as arousing questions on the validity of the blood tests which indicate cannabis-related impairment.

Researchers Hypothesize That the Answer Might be in the Liver

The director of the Marijuana Investigations for Neuroscientific Discovery programs at the McLean Hospital, Dr. Staci Gruber, stated that “we’re only just now starting to understand the cannabinoid system” and that “it’s already clear that it’s not just about what and how much you’re using; it’s about how you’re wired”.

Currently, there is limited research on persons with “ultra-high tolerances to marijuana edibles” however, Dr. Gruber and other researchers have a “compelling hypothesis”. The hypothesis is that those who are ‘ediblocked’ have an unusual variation of a “key liver enzyme” which could “essentially be too efficient at processing ingested THC, turning the compound into its ‘active’ high-inducing metabolite and then its inactive waste product before the active form can enter the bloodstream or brain”.

However, there is another similar possibility which includes being “unusually inefficient at performing this process, with little THC getting metabolized in the first place”. Dr. Gurber explains that “it’s almost as if they’re skipping the intermediate step”. He also explains that the people with the uncommon CYP2C9 gene are breaking down the cannabinoid so fast that “it doesn’t have an opportunity to create the psychoactive effect”.

What Is The CYP1C9 Gene and How Does it Impact THC Levels in the Body?

MedlinePlus explains that the CYP2C9 gene “provides instructions for making an enzyme that is found in a cell structure called the endoplasmic reticulum, which is involved in protein processing and transport”. They go on to explain that the CYP2C9 enzyme plays an important role in the metabolism and breaking down of drugs including warfarin and ibuprofen. The Boston Globe also explains that it also “encodes the enzyme that shepherds THC through its three-step metabolic transformation”. While Dr. Gruber adds that the individuals with the gene are “breaking it down so fast it doesn’t have an opportunity to create the psychoactive effect”.

A 2020 study found that the levels of THC metabolites found in the consumer’s blood varied drastically “depending on which variant of the enzyme they had”. The research from this study “casts doubt on biological marijuana tests widely used by researchers, doctors, police, and employers”. These tests do not account for the “apparently vast and hard-wired variations in metabolic rate between individuals”. Dr. Gruber explains that “it underscores the need to understand people’s genetic profile, and that there are a lot of variables people haven’t considered” such as whether one has the uncommon CYP2C9 enzyme.

The Problem With Being Ediblocked

Being ‘ediblocked’ poses a problem for those who wish to medicate with cannabis by means of oral ingestion as opposed to inhalation methods. When one is unable to feel the effects of edibles, or cannabis which is swallowed, they may experience ‘social FOMO’ or the inability to benefit from the pain-relieving and other medicinal properties which cannabis contains. Edibles make for a good alternative means of cannabis consumption which smoking is not an option. The Boston Globe states that these ‘ediblocked’ individuals could benefit from the relief of cannabis through edibles if they took a “high enough dose, or if a supplement could be developed that slows their enzyme action”.

While there is not enough research to support the hypothesis at the moment, the study and the researchers make valid points. Hopefully, research can be conducted to support the suggestions and findings so that we can find solutions for those individuals as well as for improving the means by which we measure cannabis impairment.

Literally thought I was the only one that could eat a dozen cookies and all I get is a extra pound added on.

I am one of those people. Sublingual however, does work for me. I advise anyone having issues with being ediblocked to try using tinctures or distillates sublingually. It works!

I tried them too and wondered why I felt nothing. But if I took two puffs of something of high potency I would be laid to the side ugh!!!

That’s a very insightful article and good to know. I am one of those people. I have eaten well over 500mg RSO and/or distillate only to be highly disappointed. 🥲

I also found that I don’t get high from edibles. Curious, though, whether others who experience this DO get the dry mouth and munchies without the high like I do?

Good question and definitely something worth investigating!

I have eaten edibles and I’ve gotten high. You you still get cotton mouth and snacky.

Edibles and tinctures…neither works for me

Wow No Shit…I think that story might be right..I Never feel shit when I eat edibles..I have a couple times with friends everyone got fucked up but me..I have to smoke it to get high..

It helps me eat and not to hurt my self

I’ve tried 1000mg chocolate bar, nothing. Tried the 10:1 tincture under the tongue, nothing. 2 of them the next time, nothing but a really good poop. God dam you CYP2C9!!! I really want to experience an edible high

I hope they are able to produce a product to slow the action of the CYP2C9, so that you (and all the other ediblocked persons) can experience and benefit from the edibles.

Great article. I guess I am mostly ediblocked. When I tried edibles a few times it did nothing for me so I ate more and more, until I got a headache that lasted a couple of days. Only once or twice when I was in the right setting and just sitting and listening did I ever have the euphoric feeling and then it was more of a body high rather than Mindy high. IT was like hashish that I used to get from Morocco.

Just a thank you for all the info you share with us.

This is really a relief because for the longest time I couldn’t figure out why I was the only one that it had no effect on …everyone thought I was just lying about it… I live in Florida and I visited a friend in California and she gave me 400 mg edible.. I accidentally thought she meant to eat the whole thing and I felt nothing.. she had a small piece and went and laid down…

Explore the Benefits of the Latest Trendy Cannabinoid: Delta-10 THC

Understanding the Difference Between Marijuana Strains

When going to the dispensary, it’s easy to get overwhelmed by the products and strains to choose from. There’s a ton of different strains on the shelf thanks to marketing strategies and innovative cannabis breeding. With so much information out there, it’s hard to know what to purchase when starting this journey. Let’s look at…

The University of Maryland School of Pharmacy in Baltimore is inviting students to graduate under its Medical Cannabis Master of Science (M.S.) program. Stretching over two years, the program demonstrates growing acceptance for the cannabis plant, which is currently legal in 36 U.S. states for medical purposes. The M.S. Medical Cannabis Science and Therapeutics program…

Many veterans who’ve experienced military combat often suffer and cope with post-traumatic stress disorder (PTSD). It is common for these veterans to always feel on edge, on the verge of panicking, or feeling emotionally numb. For veterans, PTSD (sometimes referred to as ‘shell shock’ or ‘combat stress’) can severely impact their livelihood. Fortunately, congressional committees…

Note: Veriheal does not support illegal drug use or illegally consuming alternative therapeutic substances, but acknowledges that it transpires because of the current illicit status. Of which we strive to change by advocating for research, legal access, and responsible consumption. One can say whatever they want about recreational drug use, but no one can deny… 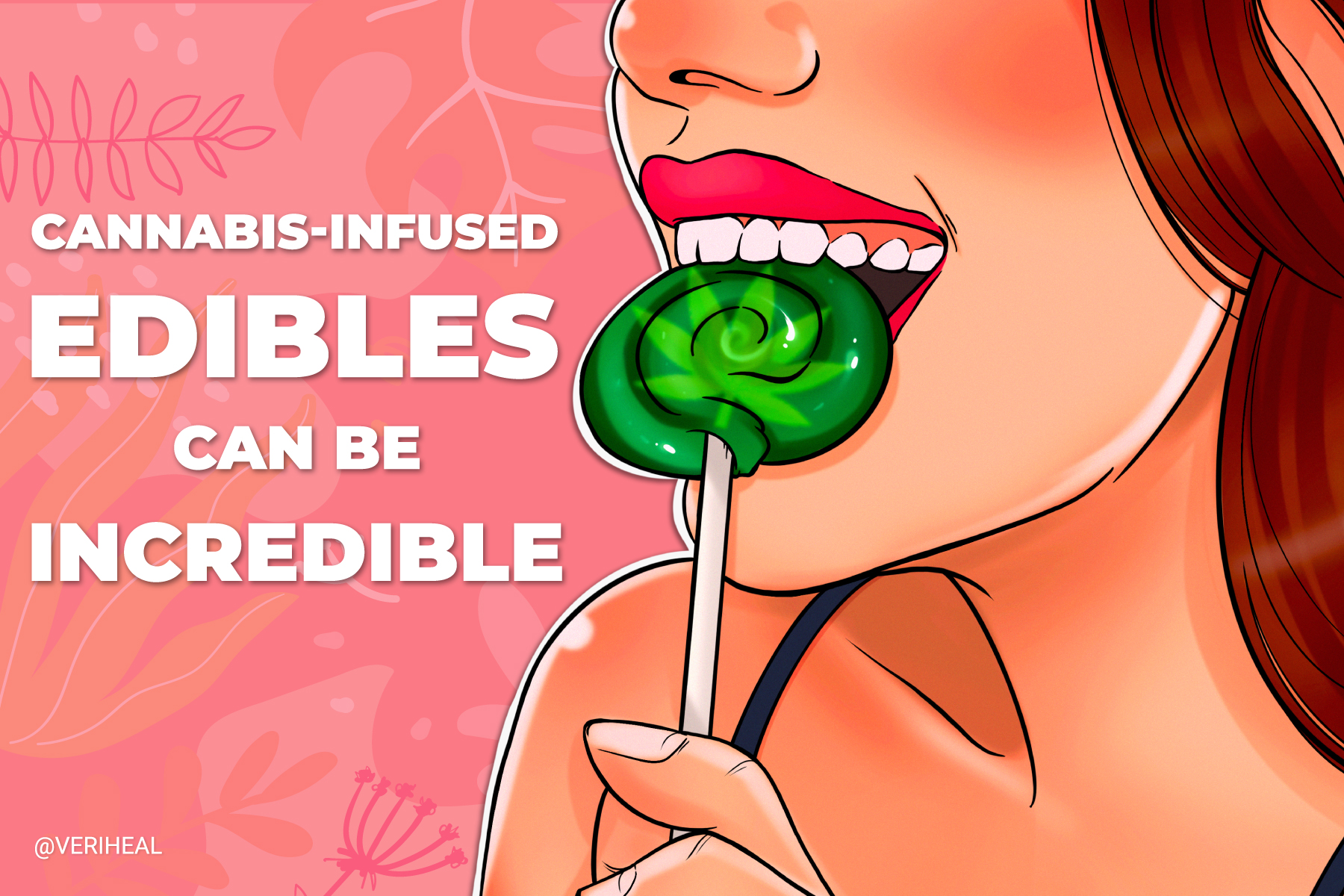 Why Cannabis-Infused Edibles Can Be Incredible

Some people get extremely giggly from cannabis-infused edibles. Some get extremely sleepy. Others find edibles to be a great way to help them get through their day and alleviate chronic pain. The point being is that edibles can treat each consumer differently. There are many factors that contribute to how edibles can affect a person….

More places have legalized cannabis, and that means more people are growing it than ever before. Cannabis sales recently hit the $90…

Hemp has been shrouded in a smokescreen of confusion since prohibition began back in 1937. Hemp’s definition describes it as Cannabis sativa…

Consider Using Cannabis and Mindfulness Throughout the Day

Mindfulness—a meditative act that can open the door to inner peace and new perspectives—goes hand-in-hand with cannabis. Practiced by some 500 million…