Illicit Market Suppliers Are Plugging Away at Success During the Pandemic 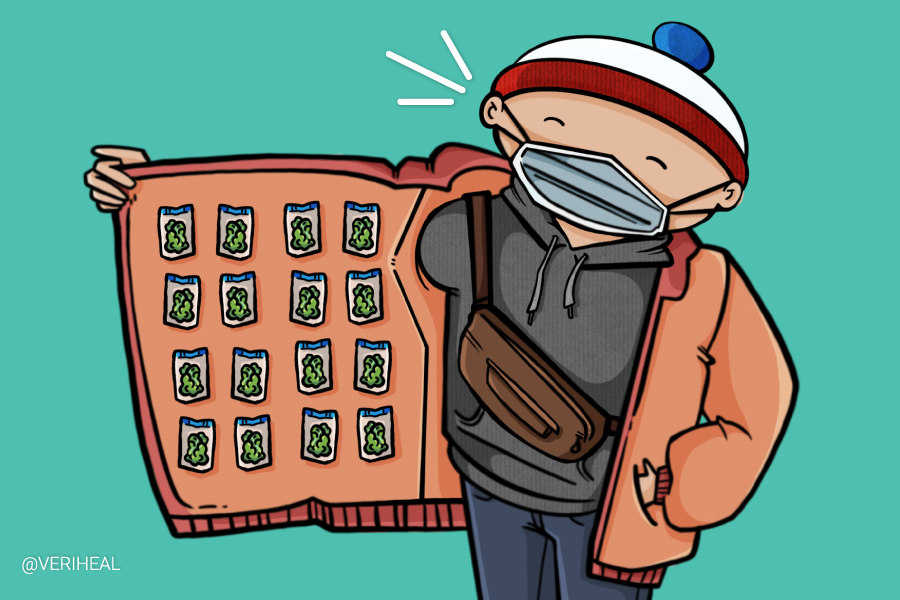 Veriheal does not condone illegal activity but acknowledges that it transpires because of the current illicit status of cannabis, which we strive to change by advocating for legal access and responsible consumption.

Cannabis and COVID-19 have mingled together throughout 2020. When COVID-19 first hit the United States in January of this year, life changed for millions of people. Businesses deemed non-essential, such as bars, gems, nail salons, and many others, all became part of a mandatory shutdown period. At first, cannabis businesses were included in this shutdown. However, that quickly changed, and cannabis businesses were deemed essential. During a first-of-its-kind shutdown of the entire United States, cannabis businesses with the proper state licenses were deemed essential by the United States and allowed to remain open. Let’s take a minute and bask in the warm fuzzy rays of that last sentence.

What the government failed to realize was that the cannabis market was going to remain open regardless of lockdown status. Legal companies that did not want to run the risk of losing their licenses and/or being shut down obviously would comply with any given restrictions. The illicit market, however, that’s a different story.

The Legal Cannabis Industry Owes its Success to the Illicit Market

A lot of people have opposing viewpoints about the illicit market when it comes to cannabis. People can hate it as much as they want, but we wouldn’t have the burgeoning legal cannabis industry we have today without the existence of that market. The illicit sector of the cannabis industry was born from forceful prohibition and the attempted eradication of the plant.

Through mass incarceration of anyone who supported the plant, those at the top attempted to eliminate any trace of its existence. This helped lead America to incarcerate more of its population than any other country in the world. Sadly, in the United States of America, a country built on the foundations of freedom, liberty, and justice for all, some do not enjoy the same freedoms as others due to invisible lines.

In places like Colorado, Nevada, Illinois, California, Michigan, and others, residents have the option of not only choosing medical cannabis but also have access to legal retail cannabis markets. The businesses in these states remained open during the COVID-19 shutdown. If you lived in Tennessee, Kentucky, Kansas, or other states without legal markets, throughout the shutdown, the only way to obtain cannabis was through illegal avenues, per the norm.

The elected leaders of states like these either have antiquated moral convictions or do not believe their citizens deserve the same freedoms as the other 36 states in America and our nation’s capital. It is not because of a lack of support for cannabis legalization in the states. Patients and consumers in these states must still live with the fear of persecution and prosecution by draconian law enforcement fueled by outdated and ill-informed opinions on cannabis and cannabinoid therapies.

Where Do You Even Find Cannabis in States Where it’s Prohibited?

If you needed cannabis in a prohibition state during COVID-19, you might have found through word of mouth that the market is dry or, even worse, that prices are sky-high. The federal and state governments told non-essential businesses to shut down and shelter in place. Those who broke the rules were subject to penalties and fines. Most people did what they were told, with only a few challenging the system.

In prohibition states, many local cannabis dealers have managed to stay in business despite the pandemic. When stimulus checks were sent out, a lot of that green went towards scoring some green from the local plug (dealer). Dealing, in general, is a risky business, but then again, having anything to do with cannabis in draconian prohibition states is just as unsafe. That doesn’t stop people from getting their smoke on, though.

I reached out to people to see how they were affected by the pandemic when it comes to getting weed in places with no legal access. Many people said they had to learn to ration their supply or go without. Dealers were sitting on their supply because moving it became increasingly conspicuous, and random traffic stops became more frequent. People had to turn to old ways of getting their supply to avoid being seen. Some depended on their old reliables such as fast food or pizza delivery plugs, and some of the suppliers that I spoke to even said they turned to drones to deliver product. One source told me, “As long as you don’t live more than a ten-minute flight away, we got you”. They said their drone could fly you an ounce no problem and drop it at your front door, in your backyard, or even at your window.

Another source who works the busy streets of a big city in TN told me that, “Business has never been better. The lockdown has more people looking for weed than ever before, and they’re willing to pay more.” When asked about having any fear of jail, he said, “If they catch me, I’m going to jail now or then, so it really doesn’t matter. I mean, if I take the risk to get the weed and they want it, then I deserve more money for my services.” He also added,

“One thing I will never do though is quit supplying medicine to the people, though it may come at a cost”.

He prefers the risk of getting products to customers vs. customers coming to him. I asked him if he worried about carrying it on him, especially during the lockdown, and he said, “Nah, I need groceries too. I do my running with the sun. When the sun shuts down for the day, so do I. It’s all peaceful at night now”. He went on to say, “I wanna thank the feds for the shutdown. It makes me feel more like a businessman. I work 9-5 now, make more money than in the past, and I get my nights off to play games and spend time with my family!”

Not everyone is doing so well, though. A lot of people that I spoke with said that they couldn’t find cannabis anywhere. When they could, they couldn’t afford it and still can’t. Many of them also said they are just too scared of being profiled with less traffic during COVID-19 restrictions. Maybe with some luck, the government will remove cannabis from the Controlled Substance Act (CSA) or at least from its current classification as a schedule one drug with a high addiction rate and no medical use.

Continuing to support outdated information such as what is found in the CSA is not a good look for the US government. It is time that the states were united with everyone having the same freedoms as their neighbors. At least then, suppliers bringing medicine to the people would have to worry less about prosecution and losing their freedoms and shift the focus to turning their illicit venture into a successful legal one.

Politics Aside, Social Media Remains a Giant Adversary for Cannabis

Ask a Budtender: What Is Proper 420 Pandemic Etiquette?