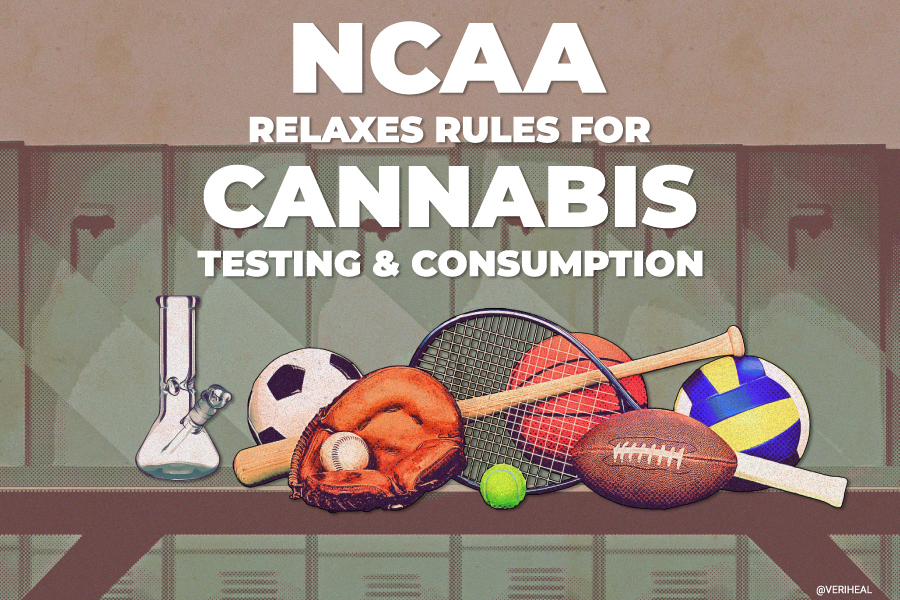 The National Collegiate Athletic Association (NCAA) recently announced that it would be lifting the restraints on its cannabis drug testing policy among collegiate athletes located in the United States. Moreover, the sporting organization has confirmed that it will reduce penalties for athletes who return a positive test. The NCAA’s updated cannabis policy includes relaxing the rules for cannabis testing and consumption among U.S. college athletes and will effect hundreds of schools and thousands of student athletes.

The Details of the NCAA’s Updated Cannabis Policy: Cannabis Testing and Consumption

NCAA officials made their decision following a two-day meeting involving the NCAA’s Committee on Competitive Safeguards and Medical Aspects of Sports, (CSMAS). The meeting, which stretched over February 22 and 23, raised the THC limit to 150 nanograms per milliliter. Previously, just 35 nanograms of THC per ml would have triggered a positive test.

THC (tetrahydrocannabinol) is the cannabis plant’s primary active constituent. Once consumed, it reacts with receptors inside the endocannabinoid system (ECS) to produce feelings of bliss, happiness, sedation, and/or relaxation; the reaction a person feels is dependent on the dose, strain, and biochemistry.

According to the NCAA, the new THC threshold for enrolled student athletes was chosen by the World Anti-Doping Agency (WADA) – the international global agency that provides regulatory oversight for drug testing in the field of athletics.

“Reconsidering the NCAA approach to cannabis testing and management is consistent with feedback from membership on how to better support and educate student-athletes in a society with rapidly evolving public health and cultural views regarding cannabis use,” said the NCAA’s chief medical officer, Dr. Brian Hainline, in a press release on Friday, February 25. “Marijuana is not considered a performance-enhancing substance, but it remains important for member schools to engage student-athletes regarding substance use prevention and provide management and support when appropriate,” added Dr. Hainline.

About the NCAA’s Cannabis Testing and Consumption Policy Shift

The NCAA cannabis testing and consumption policy shift affects 1,000+ schools and educational institutions across the United States. It is the most recent incident the American sporting industry compromising with evolving opinions and laws across the country.

Plus, when U.S. sprinter Sha’Carri Richardson was suspended from the Tokyo Olympics last summer for returning a positive cannabis drugs test, more attention was drawn to the contradiction between drug testing policies and ever-changing cannabis laws.

Aside from raising the THC threshold, CSMAS has also advised all three divisions of the NCAA to update the method of punishment for athletes who return a positive cannabis test. According to the NCAA, drug testing penalties of this kind “are legislated under NCAA bylaws, so each division will be required to separately adopt new legislation before changes are made.”

Athletes Would Not Lose Eligibility for Returning First Positive Test

According to the Associated Press, under the previous penalty structure “one positive test for marijuana would mean an NCAA athlete would immediately have to miss 50 percent of a regular season and a second would mean an athlete would sit out for ‘the equivalent of one season of regular-season competition.’” Under the NCAA’s updated cannabis policy for athletes, athletes who return an initial positive test would not face “loss of eligibility if the school provides a management plan and education for the student-athlete.”

Based on a systematic review of cannabis use and sport, use of the plant among athletes has surged over the last few years – one in four athletes reported using cannabis within the past year. However, researchers have not yet determined the true effects that cannabis may have on athletic performance and recovery.

“These adjustments to the NCAA drug testing program were approved after careful consideration and extensive discussion of the recommendations made by the Drug Testing Subcommittee, which has been meeting since last fall,” said Dr. Stephanie Chu, chair of the Committee on Competitive Safeguards and Medical Aspects of Sports.

“The updated cannabis testing (and consumption) policies create a clear pathway for student-athletes to participate in education and management programs specific to their needs at the campus level.”