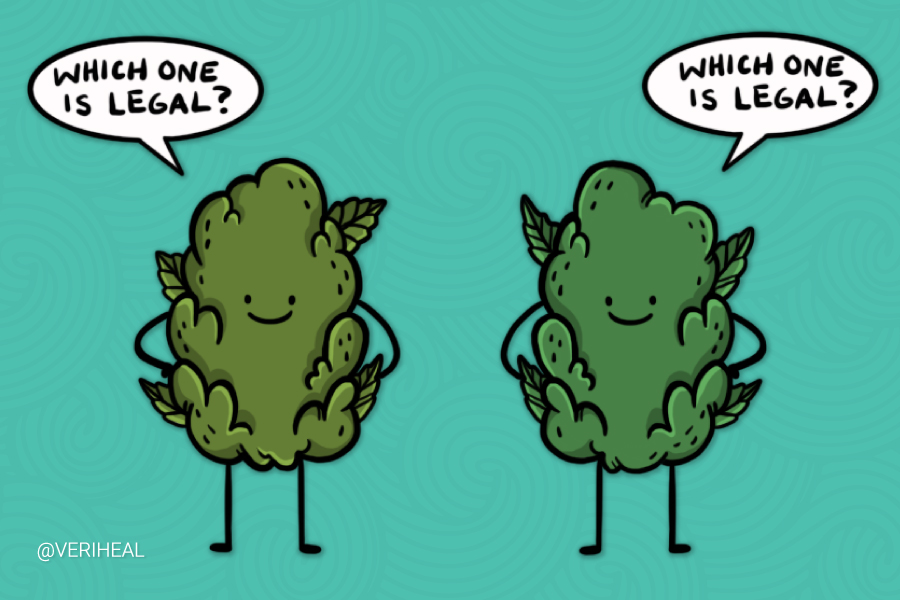 Is it hemp, or is it cannabis? The only way to tell is through testing. But not only is this a confusing question but also one that also contradicts itself. This is because hemp is cannabis. However, the understanding of this is about as cloudy as the basement in That 70’s Show. In all technicality, hemp is Cannabis sativa. However, in general terms, many people utilize the word cannabis when referring to specific strains and varieties of the plant that contain higher THC concentrations and produce intoxicating effects. When people are referring to hemp they are often referring to Industrial hemp, which is defined by the US government as a cultivar of cannabis that contains less than .3% THC.

The Legality of the Two Vary Drastically

Things start to get even more confusing when it comes to areas of legality. According to the federal government, any variety of cannabis that contains more than .3% THC is illegal to possess, purchase, grow, or distribute. In 33 states, however, there are legal cannabis markets that allow for medical patients to do all of the above. In 11 of those states, you can consume and possess cannabis as long as you’re over the age of 21. In all 50 states, however, with some minor random and very specific exclusions in a few State products that contain hemp as well as hemp flower that have less than .3% THC are perfectly legal.

With all of these gray areas and a smokescreen of confusion between state and federal laws, there have been many people prosecuted and charged with criminal charges for “cannabis” when in reality what they were in possession of and charged for was completely legal seeing how the product they were caught with was actually hemp and contained less than .3% THC.

To be able to eliminate more scenarios like this from occurring in the future, it is essential that officials have a way to test the product they find individuals in possession of to determine whether or not it is indeed completely legal hemp or psychoactive cannabis that is against the law still in some places. A crime lab in Ohio is hoping to help address this problem. The Ohio Bureau of Criminal Investigation has developed equipment that will allow officials to test the THC content in cannabis without the need for expensive and complicated chemical color testing and microscopic testing that they have relied on in the past. According to Ohio Attorney General, Dave Yost is responsible for oversight of the Bureau of Criminal Investigation as well as its crime lab, stated the following in a recent local article.

“BCI’s new ability to differentiate between marijuana and hemp creates a viable resource for officers who depend on our laboratory services offered at no cost to them.”

Over $900,000 has been allotted for drug testing equipment in total. $700,000 of that was utilized to obtain instruments that are necessary to conduct quantitative analysis, and the rest will be spent on other various pieces of technology and equipment needed to assist in the testing of cannabis and hemp. Despite the BCI doing significant research on instruments, methodologies and developing an easy way for officials to differentiate between cannabis and hemp, there is still much work to be done and some places are just saying no to pursuing minor cannabis cases. One such place in Columbus, Ohio.

According to reports from dispatch.com and Columbus City Attorney Zach Klein, “the lack of testing was only one of many reasons” that he chose not to pursue minor marijuana offenders back in August. While it is great that some law enforcement officers in the state will now be able to easily determine if someone is in possession of a legal or illegal substance we hope that one day testing such as this will not be needed, and resources such as the $900,000 utilized in obtaining the necessary equipment to help in this testing can be allotted towards helping solve real crimes.