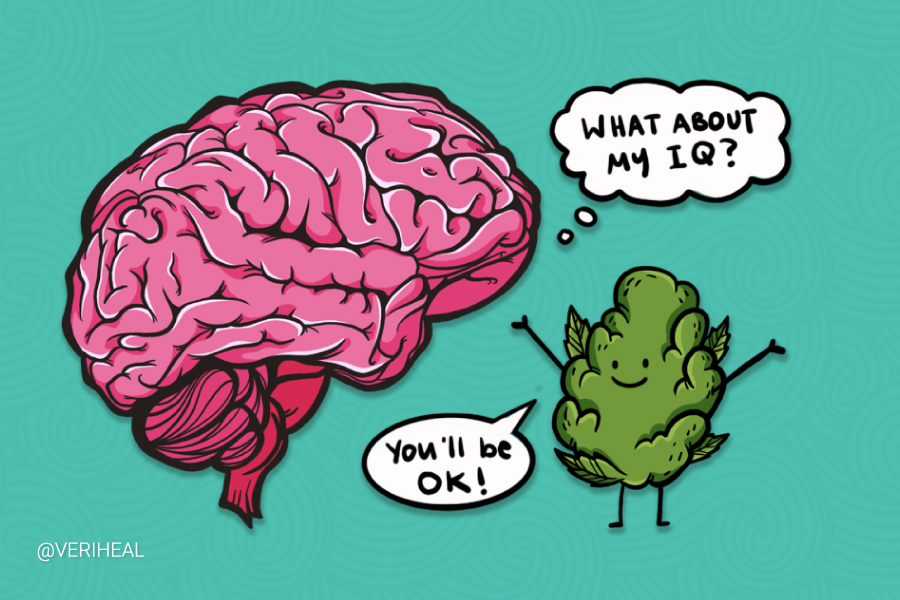 Over the years, many studies have attempted to show that cannabis use lowers one’s IQ. From the Reefer Madness to This is Your Brain on Drugs, propaganda about cannabis and the brain has been around since the ’70s. The idea that regular cannabis use can leave you with lower intelligence is fairly common—and can even be supported by some scientific research. Development of the brain and cognitive abilities, which continues into the mid-20s, involves many factors: from socioeconomic circumstances to the behavior of parents, diet, and physical activity.

Studies over the years have offered the idea cannabis use lowers your IQ. However, many other factors outside of cannabis use can impact IQ levels. For example, some people may have simply had low IQs to begin with rather than a marked decrease down by weed. Other factors such as growing up in an environment where education is not valued can cause lower IQs. The use of other drugs and alcohol can also have a significant impact on long term IQ fluctuations.

“When epidemiologists factor binge drinking, nicotine, and other drug use into their models, marijuana’s cognitive effects evaporate,” Scientific American reported.

Rather than cannabis having direct causation of lowered IQ, it is being shown that issues such as impulsivity, excessive risk-taking, and not valuing education predicted future substance abuse and lower IQ scores. The landmark study that most of the community referenced was in 2012 out of New Zealand. The study followed participants from age 13 to 38, interviewing and testing them to assess intelligence, executive functioning, and cannabis use patterns. Those who started using cannabis during adolescence saw drops in their cognitive scores later on. And of these subjects, those who used the most cannabis use saw worse drops in IQ. But as it turns out, that conclusion suffers from a really common error: correlation vs. causation.

While the 2012 study clearly shows a correlation between cannabis use as a teen and lower IQ scores as a young adult, it can’t show whether cannabis actually caused changes in IQ. Instead, these results leave open the possibility that something other than cannabis is causing both these IQ changes and increasing the likelihood to use cannabis. A more recent twin study from 2019 is questioning the methodology that led to the 2012 results, suggesting that we’ve been making unfounded assumptions about cannabis’ role in IQ drop.

The Adolescent Brain and Cognitive Development study, funded by the National Institutes of Health, has brought together leading researchers in adolescent development and neuroscience. It will follow 11,000 children, starting at the age of 10. Each will undergo serial IQ testing and brain imaging to capture brain and IQ development before any substance use. They then will document the longitudinal consequences of any substance use as the age of the subject. Researchers expect meaningful results from this ambitious project, however, it could be years away.

Totally disagree,they should do much more research into this plant