The Propaganda Behind Cannabis Prohibition Is The Real Reefer Madness 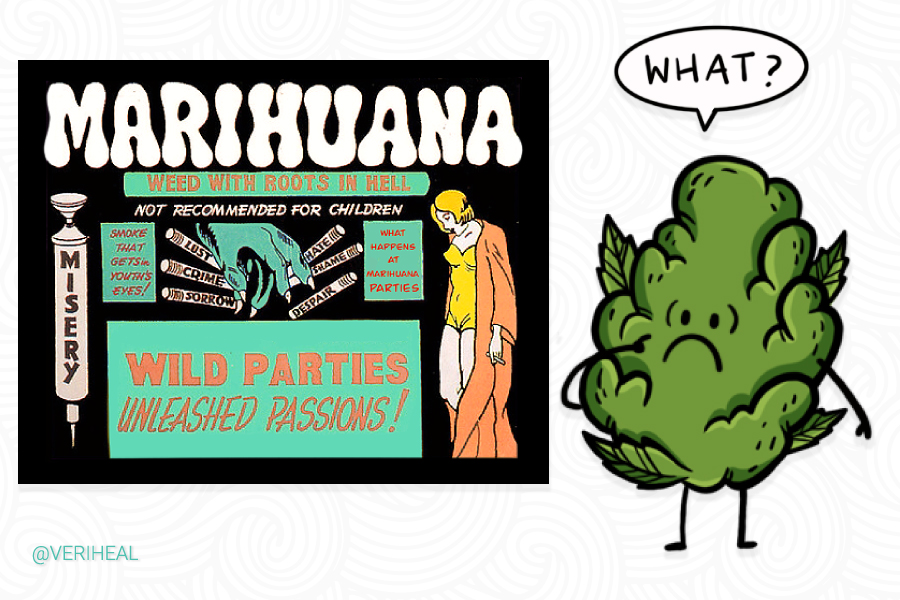 Cannabis prohibition during the 1930s was a scary time. It was a campaign against the cannabis plant built on a foundation of false claims, racism, and outright lies. “There are 100,000 total marijuana smokers in the US, and most are Negroes, Hispanics, Filipinos, and entertainers.” A popular point of view from a uniformed government during the 1930s regarding cannabis was made very public by a popular politician of the time, one Harry J. Anslinger with quotes such as, ”their Satanic music, jazz, and swing, result from marijuana usage. This marijuana causes white women to seek sexual relations with Negroes, entertainers, and any others.”

That Was Only the Beginning

That was just the tip of the iceberg. The 1930s saw wild claims about cannabis that would flower into an era known as “Reefer Madness.” In 1936 the film “Reefer Madness” was released and served as a warning to anyone who might be tempted by the devil to try “marihuana.” It warned that just one toke from a cannabis cigarette could make you kill your brother. They were way off on that one. A few tokes from a J has saved the day for many folks who were ready to lose their minds in anger.

The Devils Harvest and countless other scare tactics were used to described cannabis and its effects. The government of the time didn’t even know how to spell ‘marijuana’ and is where the marihuana spelling came into the picture. Basically, the American government wanted people to believe that cannabis or marijuana was a product of Satan that would lead to premarital and/or group sex, murder, and insanity.

Cannabis in any form was an abomination unless it was used quietly behind closed doors in “white America.” It was as if the white racist government of the time needed a new way to enslave the poor and people of color, so the dreamed-up marijuana prohibition. This dream of theirs is still very much alive almost 90 years later. The federal government still stands against the will of the people and does so with such a strong stance that they make states choose between complying with federal laws or opting not to recognize them.

It’s High Time for a Change

Today 11 states have legalized recreational cannabis, and 30 states plus the nation’s capital Washington DC have passed laws legalizing medical cannabis. Sadly, people are still trying to inform the government about cannabis. It is as if they look at cannabis with their eyes and ears closed, just running their mouths as they did in the past. One ignorant remark after the next keeps coming from political leaders regarding cannabis.

We live in a country that won’t legalize cannabis or recognize its’ medical potential. If cannabis is ever to be made legal for all, it will most likely happen as a result of voter support. Let your elected leaders know you support cannabis, and if they don’t, that you will look to vote in a replacement next election and see if that doesn’t help change their draconian stance against cannabis.

Reefer Madness Propaganda and Prohibition Statements Through the Years

Below you can find some of the most outrageous statements and claims regarding cannabis throughout the years. Do be aware that some of these statements are incredibly racist which ultimately played a large part in the foundation of cannabis prohibition.

“I do not think there is such a thing as not being able to cure an addict. Marihuana addicts must go to a Federal narcotic farm.”

“If the hideous monster Frankenstein came face to face with marijuana, he would drop dead of fright.”

“Marijuana is an addictive drug which produces in its users insanity, criminality, and death.”

“Marijuana is the most violence-causing drug in the history of mankind.”

“No one knows, when he places a marijuana cigarette to his lips, whether he will become a joyous reveller in a musical heaven, a mad insensate, a calm philosopher, or a murderer.”

“Some people will fly into a delirious rage, and they are temporarily irresponsible and may commit violent crimes. Other people will laugh uncontrollably. It is impossible to say what the effect will be on any individual.”

“The primary reason to outlaw marijuana is its effect on the degenerate races.”

“The use of cannabis, whether smoked or ingested in its various form, undoubtedly gives rise to a form of addiction, which has serious social consequences (abandonment of work, propensity to theft and crime, disappearance of reproductive power).”

“There are 100,000 total marijuana smokers in the US, and most are Negroes, Hispanics, Filipinos, and entertainers. Their Satanic music, jazz and swing, result from marijuana usage. This marijuana causes white women to seek relations with Negroes, entertainers and any others.”

“You smoke a joint and you’re likely to kill your brother.”