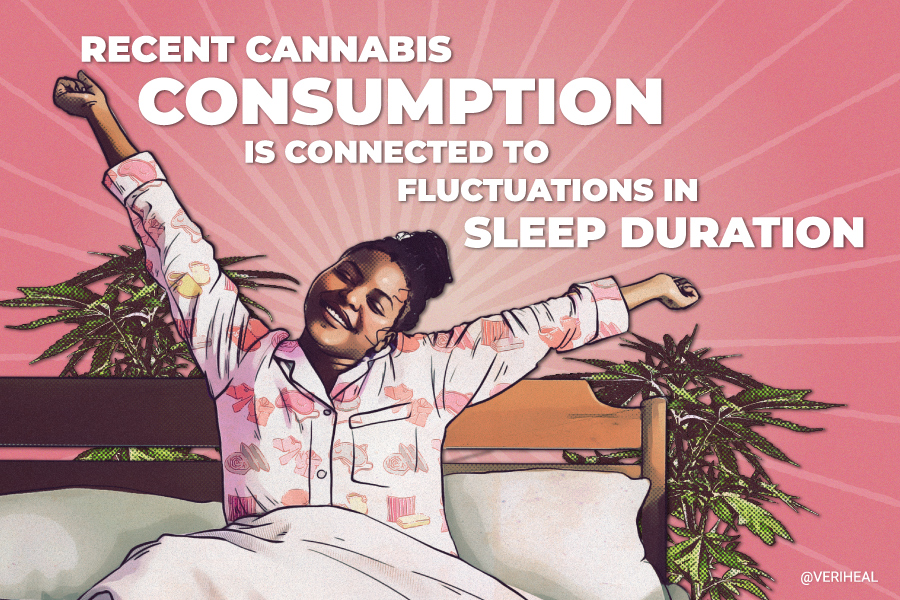 If there is one thing that every human has in common, it’s the need to get a good night’s rest. Sleep is an essential activity that assists with the alignment of the body’s circadian rhythm–A.K.A. the “internal clock.” A variety of things may impact a person’s sleep,  but what about the people who struggle with irregular sleep patterns daily? Whatever the reason for an irregular sleep schedule, whether it’s poor diet, genetics, a psychiatric disorder, or interfering medication(s)—scientists have determined that cannabis consumption may be beneficial.

Published online in the journal Regional Anesthesia & Pain Medicine, the study determined that cannabis may help to promote a healthy sleep totaling 9+ hours. Conversely, the green plant may also cause consumers to sleep less than six hours per night. The new research—which delved into a large representative sample of U.S. adults—backs up previous claims indicating that cannabis may help induce a restful night’s sleep.

For example, preliminary research into the power of using cannabis for insomnia hypothesizes that cannabidiol (CBD) may harbor therapeutic benefits for insomnia patients. The report titled “Cannabis, Cannabinoids, and Sleep: a Review of the Literature,” also revealed that delta-9 tetrahydrocannabinol (THC) may reduce sleep latency. However, the psychotropic compound could cause long-term sleep impairment.

Although the proof of cannabis’ influence on the sleep-wake cycle has been vague, the latest research demonstrated that cannabis consumers were more likely to sleep for longer periods of time. On the other hand, consumers also had more trouble falling asleep, with many reporting shorter sleep duration.

Cannabis, Cannabinoids, and Sleep: What Did the Study Find?

Prior to the study’s execution, the researchers sought to understand if cannabis consumption impacts nightly sleep duration in a nationally representative sample of U.S. adults between the ages of 20-59. Each respondent’s feedback was delivered as part of the biennial National Health and Nutrition Examination Survey (NHANES) covering the years 2005 to 2018.

The investigators aimed to find out if respondents experienced difficulty drifting off to sleep, staying asleep, or oversleeping in the preceding 2 weeks. Additionally, the research team analyzed whether or not the respondents had ever consulted a healthcare expert or doctor about a sleeping difficulty, as well as the frequency of (if any) daytime sleepiness on at least five of the previous 30 days.

Individuals were characterized as either recent or non-users, depending on their consumption habits within the last month. Duration of sleep was defined as follows:

Study authors also analyzed a number of influential factors, including the following:

Cannabis Consumption’s Impact on Sleep: What Did the Results Reveal?

In total, the researchers recorded survey responses from 25,348 people. However, the final analysis was gleaned from 21,729 respondents – representative of approximately 146.5 million U.S. adults. As per the results, average nightly sleep duration fell just below 7 hours across the entire sample. Specifically, around 12% claimed that they were getting less than 6 hours of shut-eye per night, whereas 4% managed to indulge in more than 9 hours a night.

The research team found that 14.5% of respondents, equivalent to 3132 people, admitted to having used cannabis in the preceding 30 days. Interestingly, there was a higher chance of recent consumers oversleeping or under-sleeping. As opposed to those who had not consumed cannabis in the previous 30 days, consumers had a 34% increased chance of short sleep and were 56% more likely to sleep for longer periods.

Cannabis consumers were 31% more likely to struggle falling asleep, staying asleep, or oversleeping in the preceding two weeks. Moreover, those who enjoyed the plant were 29% more inclined to open up about their sleeping problems with a doctor. One of the main takeaways from this study was that frequent cannabis consumption did not trigger feelings of daytime sleepiness.

Cannabinoids and Sleep: An Area for Further Study

Since the study was dependent on self-reported data and contained scarce information pertaining to cannabis dosage, the authors noted that the question responses may have been somewhat limited. The team also believe that cannabis’ historically flawed stigma may have stunted the depth of the study’s findings.

“Increasing prevalence of both cannabis use and sleep deprivation in the population is a potential cause for concern,” considered the authors. “Despite the current literature demonstrating mixed effects of cannabis and various cannabinoid formulations on sleep architecture and quality, these agents are being increasingly used as both prescribed and unprescribed experimental therapies for sleep disturbances.

Cannabis-derived compounds—A.K.A. “cannabinoids”—are being increasingly adopted as pharmacological agents for sleep disorders. In particular, THC and CBD have demonstrated their ability to influence endocannabinoid and other neurochemical systems that play an important role in impacting things like the circadian sleep/wake cycle, mood, and autonomic function.

The most recent study’s findings highlight minute differences across the survey years. However, as an observational study, the investigators confirmed that cause and reverse causality cannot be accurately determined. “Our findings highlight the need to further characterize the sleep health of regular cannabis users in the population. Sleep-wake physiology and regulation is complex and research about related endocannabinoid pathways is in its early stages,” concluded the team. Further research is necessary.

I am prescribed marijuana to aid in anxiety, ptsd and insomnia. It has been a God send. For years I could not fall asleep or stay asleep. The VA gave me sleep medicine which i tried not to use because i feared becoming addicted. And when i did use it, i felt like i was hit by a bus, when i woke up. Now I get a full night of rest. I don’t even have to take it every night. Just when I feel I need some assistance.