Home News The MORE Act Has Passed The House So Now What? 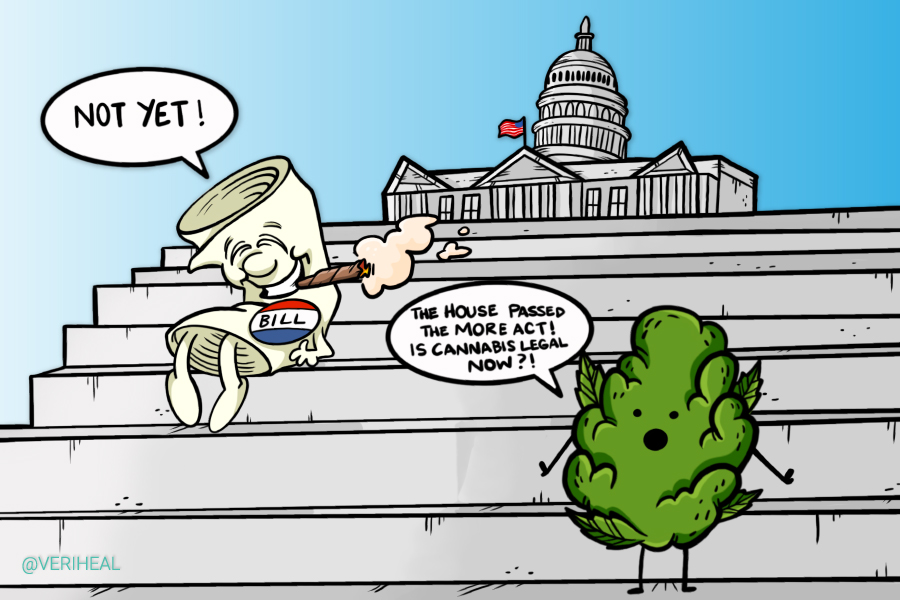 The US House of Representatives voted on and passed the 2020 MORE Act (Marijuana Opportunity Reinvestment and Expungement Act) with a 228-164 vote, but this doesn’t mean the bill was passed. Instead, it has set the stage for federal cannabis legalization in 2021, a showdown between democrats and republicans. Ass and elephant aside, many people thought cannabis was legal when they heard the House had passed the MORE Act. Sadly, this is not the case.

Is the MORE Act Just More Acting by Our Leaders?

After hearing of this news, many Americans felt the MORE Act was just “MORE Acting” by America’s political leaders. How long can the United States Federal Government oppose the people’s will and continue to support draconian prohibition in what is supposed to be a democracy? The people have spoken. This is evident by the number of states in our country that have gone against federal government laws to legalize cannabis. An even better question to ask is, how long will the American people allow a misguided government to dominate their lives regarding cannabis legalization?

On the Brink of Collapse

America is on the brink of a financial collapse, with the economic impact of Covid-19 being felt by everyone across the country. In February of 2020, America’s unemployment rate was sitting at around 3.5%, according to government stats. As of the first week of December, America’s unemployment rate has doubled to approximately 6.7-6.9%. Our government is stuck in a debate about another round of stimulus checks. States like Kansas and many others are continually cutting education programs and taking money from them to fund other areas lacking in funds like highway departments. Meanwhile, America is missing out on the chance to jump into the global cannabis trade community.

So What is Next for the MORE Act?

Now that we know the House has passed the MORE Act, what’s next? What was the GOP (Grand Old Party, a traditional term for the Republican party) response to this, and what is the outlook for the Senate vote?  These are some of the questions Americans are left asking. What is clear is that times are changing and some of our government is beginning to listen to the people. To help get a solid answer to what’s next for the MORE Act, I reached out to a group on the frontlines of this topic, NORML to get a quote on the passing of the MORE Act. The Deputy Director of NORML, Paul Armentano promptly replied back saying,

“The MORE Act removes the cannabis plant from the federal Controlled Substances Act — thereby eliminating the existing conflict between state and federal marijuana laws and providing states with the authority to establish their own cannabis laws free from undue federal interference. This vote is historic because it marks the first time in 50 years that a chamber of Congress has ever revisited the classification of cannabis as a federally controlled and prohibited substance and it marks the first time in 24 years — when California became the first state in the nation to opt-out of marijuana prohibition — that a chamber of Congress has ever sought to close the widening chasm between state and federal marijuana policies. By going on the record with this vote, House members have set the stage for a much-needed legislative showdown in 2021 when we will have the Biden administration in office — one that has publicly expressed an appetite for advancing the restorative justice remedies outlined in the MORE Act. We are primed and ready for this legislative debate and we expect, ultimately, to win it.”

Will the Senate Kill the Momentum?

The House approved the MORE Act, but many believe the bill will stall when it hits the republican controlled Senate according to what many media outlets are reporting. But is this the case? Ending the decades-old prohibition of cannabis and acknowledging the failed war on drugs is the “elephant in the room” for republicans of the Grand Old Party. Hopefully, the House vote in favor of the MORE Act will signify it’s time for a change. As Americans, we need to let the GOP know we mean business when it comes to our freedoms. It is no longer the place for the few to decide what is best for the rest of us. The people are not alone when it comes to feeling that the feds are behind the times when it comes to cannabis legalization.

The day the vote was passed, Rep. Jim Clyburn, D-S.C., tweeted, “Today, the House passed the MORE Act which would, decriminalize marijuana, expunge non-violent federal marijuana convictions, and more. 47 states have reformed their laws regarding marijuana possession and usage. It’s time the federal government joined them.

47 states have reformed their laws regarding marijuana possession and usage.

The people are starting to make their voices heard by the Grand Old Party. Let’s not stop until we achieve our goal and remove the negative impacts prohibition has made on America. There are so many more important topics that we need to focus on. We must collectively address the anti-cannabis GOP Elephant in the room, and put an end to prohibition. Power to the people!

I started smoking in 1961 , have seen an experienced a lot ! Was equipment mgr. for BoxTops dyring that period ! Worked in every state an soon learned a mess of folks LOVE a fat one ! Been puffin 59 years an love the taste, Smell , touch an the relaxation that comes with the weed ! I suffer with Glocoma , a back deformaty Called Scoliosisspondalowlisthisis ! Ya i know what a word , but it ends up theres a nerve disorder that comes along with the word ! CANNABUS has helped me physically an the buzzzzz is GREAT ! If im stoned or straight im fine ! Just rather smoke a fat one with a friend an CHILL out ! AMEN AMEN i say to you if ya havent givin it a try , ya dont realize what ya missin !!!! Never have i had a headache ! Recreational is the way to go BIDEN/HARRIS 2020/24!! An that a FaCT !

Ya think it is about time, speaking of time, get the old guard out of the way, it’s long over due. Most Americans agree with legalization as a whole, if it helps someone feel better than this shitty Covid 19 has , than let the people go!
UN-shackle the chains of ignorant people, the TAX revenue alone would go to much needed issues that our great country faces, as a Service Connected Army Veteran, I fought for this country and I say get this legalized, controlled like alcohol. taxed as it should be, medical issues should be given preference as in no tax, I find no solid reason why it should not be your right to use if you choose.
I can’t find a single argument that has substance, it is not a gateway drug, it is am issue for my freedom and like prohibition, it took years after Americans said yes, the hard Righteous few who in Senate will be the ball busters in the extension of the right.
The USA passed legislation legalizing CPD, disguised it as HEMP ACT, the Governor of Wisconsin Walker drop licked it because the Dems had it wired right, control it, tax it, of I am old enough to enlist to serve than I should old enough to make up my own mind.
Hence, the issue is simply Old people are dying off and the young folks have the voice, pass freedom, let it take it’s natural course, the police don’t want to deal with it, its a nonviolent medication, pot smokers don’t kill, don’t commit outrageous crimes let the [people be free.
GMK
Army retired, disabled Veteran, service Honorable and decorated HELL YEAH

good to hear this. keep us informed, thanx

Something needs to be done these laws are not fair. I was given medical cannibis to help with stress and anxiety and don’t you no I get approved and then get a dui for it being it my system. Which is about to ruin my life literally.
It’s just not right.