Home Lifestyle What Happens if Your Pet Accidentally Consumes Cannabis

What Happens if Your Pet Accidentally Consumes Cannabis 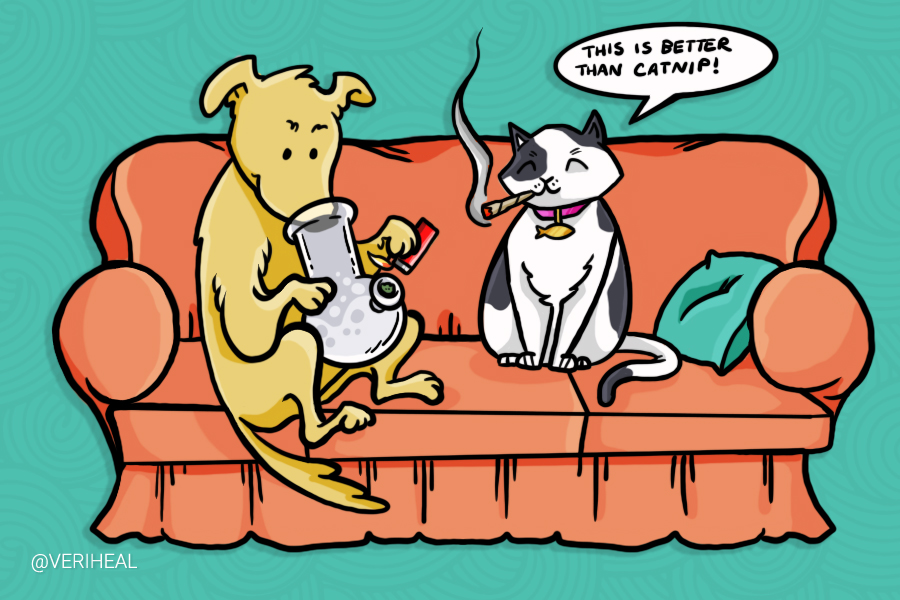 Cannabinoids found in the cannabis plant react with the cannabinoid receptors in our body’s endocannabinoid system. Cannabis has long been used by humans for medicinal, recreational, and functional purposes for thousands of years but has gained legalization and decriminalization all over the work in the last few years. Along with this gain, there has also been an increase in accidental consumption of cannabis by pets. Do the cannabinoids from cannabis react with the bodies of animals/pets? Is there any danger?

Animals that can respond to cannabinoids from cannabis can do so through similar exposure to the plant as humans get. This includes any consumable and smoke/vapor although edibles are more likely to attract an animal. Unless you decided to play a cruel prank on your animal, situations where animals are exposed to cannabis happen by accident.

All Animals Have An Endocannabinoid System

All animals, just like humans, have an endocannabinoid system. They have two receptors in their bodies, CB1 and CB2, which is what the cannabinoids bind with in order to put out the infamous cannabis effects. CB1 is the receptor responsible for the effects experienced in the central nervous system and the CB2 receptor is responsible for the peripheral tissue affects. Cannabis has proven itself safe to humans, but for animals, it can end in death. However, factors affect the extent of the implications of animals from being exposed to cannabis. There is no official safe level of cannabis exposure to animals but there have been more cases of death linked to edibles than to smoke/vapor inhalation. Death of animals exposed to cannabis has actually been really low until the development of medical-grade products and gradual widespread acceptance of cannabis use. Medical-grade products tend to have a higher level of cannabinoids (such as THC and CBD) which can increase an animals’ chance of death once exposed.

Factors that can affect the extent of implications in animals:

Will Cannabinoids Influence Cats and Dogs?

Can the cannabinoids in cannabis impact your cats and dogs? Yes, it can. It only takes a small amount of cannabis, whether received first-hand or second-hand, to intoxicate your cats and dogs. Dogs have more cannabinoid receptors in their brains which could mean that the experience will be more dramatic and potentially more toxic, depending on what the dog consumed. If you want to help your cat or dog, it is important that you provide accurate and complete information. This is due to the fact that eating a cannabis-infused chocolate bar would require different treatment than situations where your pet inhaled second-hand smoke. Eating a chocolate edible would require treatment for the cannabis and the chocolate whereas the smoke inhalation may require additional treatment for the respiratory irritation that may occur.

Signs to Look Out For:

What Other Animals Can Cannabis Intoxicate?

The short answer is that all animals classified as ‘vertebrate’ can be intoxicated by cannabis. Vertebrate animals are all animals that have a backbone (the vertebrae) which also means they have cannabinoid receptors in their bodies, just like us humans. Animals that fall under this category include mammals like horses, fish, birds, amphibians, and reptiles. Although this is quite a large number of animals that can potentially get intoxicated through cannabis exposure, those factors mentioned above will definitely influence how the cannabis is received and dealt with in the bodies of those animals.

What To Do If Your Pet Has Consumed Cannabis?

Many pet owners have turned to cannabis products to help with their animals with conditions such as seizures. Although medical cannabis research is still a bit behind on this, like with many other areas in medical marijuana, cannabis can still be effective in treating/alleviating those conditions. It is very IMPORTANT that you only treat your animals’ condition with CBD products, preferably ones that have been cleared by vets. San Francisco Bay’s Auntie Dolores has a range called ‘Treatibles’. They are CBD and non-psychoactive cannabinoid-based pet treats. Treating your animals with animal/pet approved products is important to avoid adverse/accidental exposure to human cannabis and medical-grade cannabis.

Although your animal is likely to be okay, it is not worth taking the risk that they won’t be. The best thing you can do is take proactive preventative measures to ensure that your animals do not accidentally, or purposefully, get exposed to cannabis. Make sure to store your cannabis in a secure and hidden location. It is also important to keep in mind that smoking in the same room as your animals can also expose them to cannabis, especially if there is insufficient ventilation.