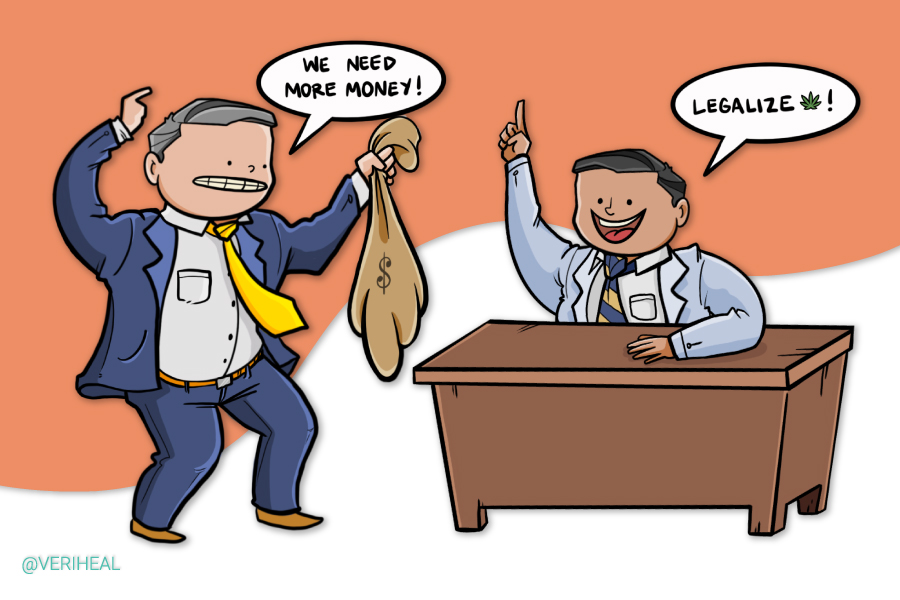 Cannabis legalization is a serious question that deserves serious answers. The way that an individual answers questions regarding this issue shows a lot about them. Many states are finding themselves in a financial crisis. Kansas and New York might be a little apart from one another, but they both have one thing in common, a severe state deficit. Kansas has been robbing their education department to pay for other areas of government. They tried legalizing casinos and putting higher taxes on alcohol and tobacco only to see failed results. Now they have a population addicted to gambling, tobacco, and alcohol. This is leading to a rise and other crimes such as robbery and drug use of methamphetamine. This is a problem that, if left unchecked, will result in detrimental harm for the citizens of the state. New York is also in a financial crisis. Both of these situations could be incredibly improved through positive cannabis reform and legalization. For that to happen, though, it looks like some of the career politicians in office are going to have to be voted out.

New York is a vast state made up of five boroughs. It is known for legendary sites such as Central Park and the Empire State building and its nightlife and entertainment sector of Times Square and Broadway. All of this allure attracts more than 8.39 million people to live in the state. This year before the start of the COVID-19 pandemic, the state of New York was nearly six billion dollars in debt. It seems that the pressure of this financial debt is starting to pile up on lawmakers. Citizens in the state of New York have screamed about the wrongs of cannabis prohibition since the early 1940s. Eighty years later, they still sit in basically the same situation asking for an end to this draconian way of the past. Current estimates predict that the state of New York could increase revenue by $300 million per year from cannabis taxes.

New York stands to do more than just improve its economy by legalizing cannabis. People across the state of New York have been prosecuted and persecuted over cannabis laws since the beginning of prohibition in 1937. People of color have experienced harsh treatment by law enforcement, and cannabis has been the number one contributor for law enforcement to blame their actions on. If cannabis were to be legalized across the state of New York, chances are the citizens there would eventually stop seeing persecution for smelling like cannabis.

Suffering Isn’t Ever a Joke

How many times has the ploy of smelling cannabis been wrongfully used to harass somebody? The answer to that is too many. New York currently has an unemployment rate sitting at about 16.3%. Legalizing cannabis on a recreational level would cause a surge in employment for the state of New York and anywhere else for that matter. When cannabis businesses start popping up, it takes more than growers and budtenders to make them happen. Everything from engineers to accountants, carpenters, plumbers, electricians, IT professionals, and more find employment in the cannabis sector.

Current New York Governor Andrew Cuomo has reversed his stance on cannabis legalization. Ten years ago, Andrew believed that “recreational” and medical cannabis was a joke. He opposed its legalization and continued support of the decades-old marijuana prohibition laws. That seems to have changed. In recent remarks, Andrew Cuomo has suggested that cannabis legalization could help the state financially. The six billion dollar state deficit New York was facing before COVID-19 has been said to have now been increased to roughly $15 billion.

It’s All About the Benjamins Never the People

When a reporter from the USA Today Network reviewed a recording of a virtual event in which Andrew Cuomo hosted charging $35 per viewer to promote an upcoming book, they discovered him replying to a question someone asked about when New York would be legalizing adult-use cannabis. Andrew replied, saying, “soon because now we need the money, we need revenue, and we’re going to be searching the cupboards for revenue, and I think that is going to put marijuana over the top.”

This is excellent news for the citizens of New York. Still, also a little discerning at the same time, apparently, the suffering and wrongdoing of millions of citizens were not enough for this political figure to support cannabis legalization. The plethora of success stories ranging from children to seniors and everyone in between with medical cannabis held no factor in this man’s mind. The only determining factor that changed his opinion on cannabis legalization was the almighty dollar.