Home Research Can Patients Use Medical Cannabis to Treat Herpes?

Can Patients Use Medical Cannabis to Treat Herpes? 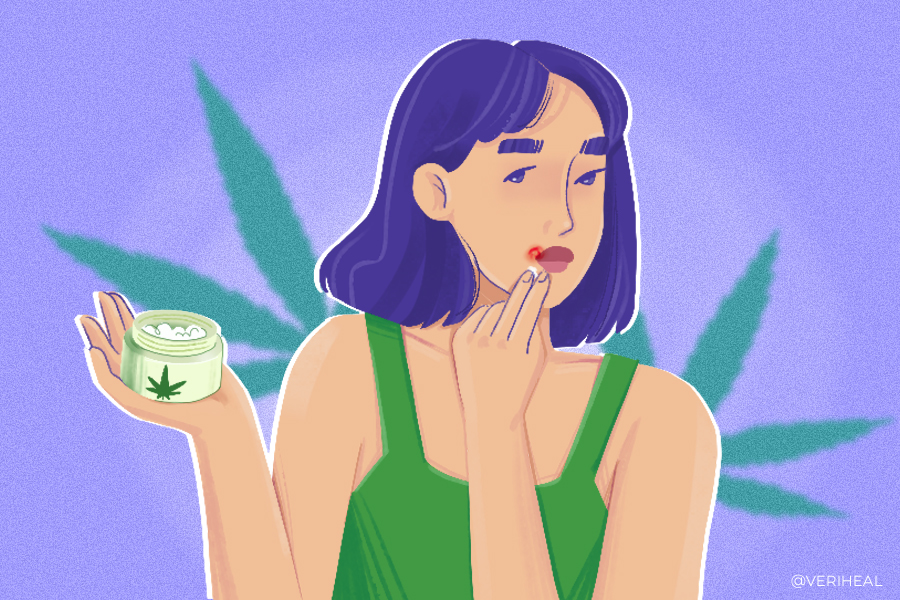 According to the World Health Organization (WHO), some half a billion people around the world are believed to have the herpes virus. Also known as herpes simplex virus (HSV), this contagious virus tends to remain dormant in the system and can erupt into an outbreak of sores on the mouth and/or genitals. While there is no certified cure for HSV, it is possible to obtain over-the-counter (OTC) medications that can help to combat the symptoms.

Medical cannabis is an up-and-coming medicinal treatment that has caught on in 38 U.S. states and has been used medicinally for centuries before its modern legalization. There is some newfound attention for its potential to treat herpes. Medical cannabis users can benefit from the plant’s therapeutic qualities to ease feelings of anxiety that might otherwise prompt a herpes outbreak.

Cannabis also lends promise in this field of medicine for a number of other reasons, which we’ll cover in this article.

How and Why Cannabis May Effectively Treat Herpes Simplex Virus

A decades-old study attracted more speculation than approval back in 1990, when a scientist from the University of South Florida claimed that cannabis’ primary psychoactive compound THC (tetrahydrocannabinol) could prove useful in cases of treating herpes. More recently conducted research supports the findings of previous studies regarding medical cannabis as a viable treatment option for herpes. Specifically, the research hones in on the functions of cannabinoids in cases of Herpes Simplex Virus (HSV).

Science has taught us that medical cannabis for herpes may prove useful for patients who want to prevent herpes from spreading. However, it’s important to note that not all cannabinoids are capable of accomplishing this task. One particular cannabinoid—delta-9 tetrahydrocannabinol (THC)—has demonstrated its suitability for regulating T-lymphocyte functions and immune responses to tackle the viral infection.

A 2004 study, titled, “Delta-9 tetrahydrocannabinol (THC) inhibits lytic replication of gamma oncogenic herpesviruses in vitro” found that the endocannabinoid system (ECS) is possibly involved in regulating gamma herpesvirus latency and lytic replication. THC does its job by mildly binding with cannabinoid receptors within the brain and lymphoid cells. Buried inside these tissues are cannabinoid receptors that promote viral gene activation and enhanced immune signaling after responding to THC dosage and binding.

Another cannabinoid with therapeutic potential is CBD, which can help to fight against the inflammation and intense immune response associated with HSV outbreaks. CBD has earned its rightful place in the medical cannabis market valued at $11.25 billion last year. This cannabinoid’s natural anti-inflammatory powers, tissue and cell-repairing capability, and strong defense against foreign pathogens (such as viruses) make it a valid choice for people who have contracted HSV. Plus, it’s widely available thanks to the U.S. Farm Bill’s 2018 passing that legalized hemp-derived CBD across the nation.

Based on the findings of a separate 2010 study published in the Cannabis Health Index eBook, topical cannabinoids managed to significantly reduce nerve and neuropathic pain after a virus flare-up. Carried out on humans in Munster, Germany, the study also threw attention to the fact that medical marijuana for herpes may offer symptomatic relief for people who endure pain, anxiety, depression, sleeping problems, and inflammation as a result of contracting HSV.

Recommended Cannabis Strains for the Symptoms of Herpes

Consult your MMJ doctor to decide which consumption method is most appropriate for your specific condition. They can also help recommend a strain that will help with symptom management and fit into your personalized treatment plan.

Focus on the cannabinoid content and the presence of any other terpenoids or flavonoids that might amplify the overall experience. Recent finding suggest that terpene and cannabinoid profiles are of greater importance than whether your strain is an indica or sativa. You should also think about what kind of symptoms you were experiencing, so as to identify a suitable strain the targets that specific symptom.

Listed below are a few recommend cannabis strains for each commonly reported symptom of herpes:

Talk to Your Doctor about MMJ for Herpes

If you’re taking an existing type of medication for herpes, such as acyclovir (Zovirax), famciclovir (Famvir), or valacyclovir (Valtrex), it’s advisable to arrange a consultation with your doctor and openly discuss your intentions to use medical cannabis as part of your herpes treatment.

Synergistic reactions—a process that occurs via the “entourage effect“—are not unheard of and they may transpire if cannabis’ active compounds, e.g. cannabinoids, terpenoids, and flavonoids, react with the chemicals contained in over-the-counter medications.

Another important tip is to pay attention to the source of your medical cannabis, since its quality, safety profile, and potency will depend on its origin. The easiest way to filter your options is to track down a company that provides third party lab testing and positive testimonials from previous customers.