Cannabis Dispensaries Are Targets For Looting During Civil Unrest 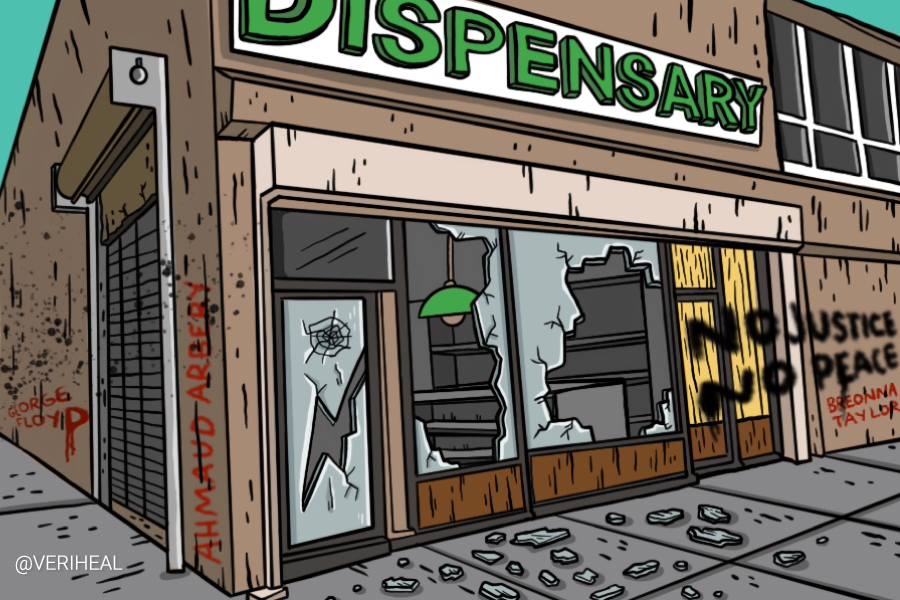 While most haven’t even wrapped their head around the now wavering global COVID-19 pandemic, the last week of May 2020 has been surmounted by escalating protests after the death of George Floyd in Minnesota during his arrest. As if the community wasn’t suffering enough, the public outcry from this specific incident has hit many urban areas traumatically. In the midst of peaceful protests, marches, and vigils against racial inequality – some of the crowds have begun turning on their local police and businesses. As neighborhoods in downtown areas and elsewhere have steadily cleaned up following several destructive nights of fires, looting, and vandalism in many urban cities.

Violence And Looting Breaks Out During Protests

Members of the California National Guard were deployed onto many streets within the first few days, allowing police officers and deputies to arrest looters and vandals. The Guard members will remain present when demonstrations and vigils throughout the Los Angeles area in Santa Monica, Compton, Pasadena, Long Beach, and other locations in California.

Dispensaries Broken Into As Violence Escalates

One cannabis dispensary owner whose business was caught in the chaos stemming from the reaction to rampant police violence over the weekend says he values life and justice over his stolen cannabis merchandise. Cookies, a well-known dispensary in Los Angeles, was just one looted during these massive protests. The brand’s creator and store’s part-owner, a famous rapper-turned-cannabis-entrepreneur – Berner, says he is more concerned about the underlying injustices being highlighted by protestors than the damage to his storefront.

The rapper doesn’t condemn the people who broke into the store. Instead, he argues that human life is more valuable than any building.

Looting and destruction took place during Friday’s large protest in Oakland after officers used tear gas on large crowds. The owner of a downtown Oakland cannabis dispensary said as many as 10 people broke into his business on Friday night and made off with thousands of dollars of products. Several West Oakland dispensaries were also robbed. The owner believes the robbers took advantage of the rioting going on downtown but weren’t necessarily outsiders.

Medmen dispensary was among the West Hollywood Businesses that was hit with property damage and looting during the George Floyd riots over the weekend. The front window was smashed and vandals were able to penetrate through the gated shutters, but only a few things were stolen from the front of the store.

The cannabis industry is at higher risk for long term damage from all this. While many saw significant cuts in profits and increased cost of operations, subsequently looting has left many in a deep hole. Cannabis companies have historically had a hard time accessing coverage for things like lost employee wages, property damage, and more due to cannabis’ federal classification as a Schedule I substance.