Home News Get Your Cannabis Delivered to You By Drone

Get Your Cannabis Delivered to You By Drone 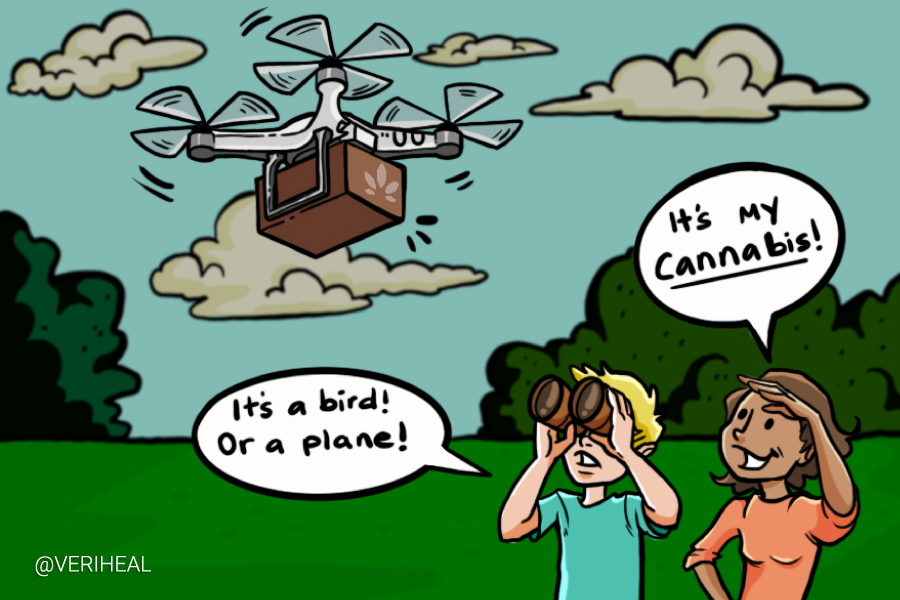 If you’re hanging out in Seattle this spring – there could be cannabis flying over your head. A local tech company, GRN Holding prepares to debut a fleet of drones for cannabis deliveries in Washington. Merry Jane, a fellow cannabis website, jokes “Look in the sky — it’s a bird! It’s a plane! It’s… a drone carrying 10 pounds of dank, three ounces of concentrates, and a few hundred vape cartridges?” But on the most serious note of cannabis delivery drones – is this the future of cannabis convenience?

Drone Deliveries To Take Place Between Dispensaries and Distributors

Some say that when it comes to rising industries like cannabis, the sky’s the limit. That’s about to be tested by this Seattle based company planning to use drones for cannabis deliveries. When the cannabis drones first debut, GRN is adamant that they will be used only for transportation between wholesale distributors and dispensaries. While this service will not be available for direct-to-customer delivery, perhaps one day it will. With less than two weeks to go at the time of writing this, Squad drone is counting down to launch day.

To assure compliance, each drone will be outfitted with an iPad featuring a state-approved CannaTrac digital payment system and e-signature software. The fleet of drones has been undergoing testing and customization for the industry over the last year. The fleet consists of six drones with a payload of up to 90 pounds and a delivery range of 6 miles. The drones will be outfitted with a highly accurate advanced GPS navigation system including their digital signature interface.

Logistics and security are a large cost to the cannabis industry. GRN cannabis delivery drones expect to remove about 80% of associated costs by increasing delivery timelines/safety and develop a more eco-sensitive process for getting products from point A to point B. The drones are battery operated but have a hybrid system that acts to recharge and extend flight times if needed. The cost to run and operate a drone is 1/10th of a van or sprinter. This hits all the needed elements for a true market disruptor. This is not some move to change an industry on just policy or technology; this will change the cannabis industry based on safety and cost savings.

What Could Go Wrong?

I hate to burst the risk bubble, but it will only take one crashed drone – spilling THC products upon impact – to cause a major PR funk. All the flights will be monitored by a command center in Seattle and operated by a licensed pilot. In addition, the entire flight, delivery, and transfer transaction are captured on an attached camera – so the theft factor seems on par or lower than the robbery of traditional delivery systems. While I am sure the drone designers have considered all these potentials and are outfitting these dank-deliverers with needed safety features. There are many ways this could go wrong, but the mere effort in utilizing the latest technology in a burgeoning industry really does seem inevitable.

Times have come a long way, with drones once used to identify illegal grows across the state, they will now be delivering the same substances….LEGALLY. With Seattle as the beta market, who knows where this could spread next. As much as the sustainable cannabis advocates want to see a greener market with the most efficient practices in all legal states – California has set policies one step ahead. California’s official policy specifically states “Transportation [of cannabis] may not be done by aircraft, watercraft, rail, drones, human-powered vehicles, or unmanned vehicles.”