Home Lifestyle Indoor vs Outdoor Grown Cannabis: Which is Better?

Indoor vs Outdoor Grown Cannabis: Which is Better? 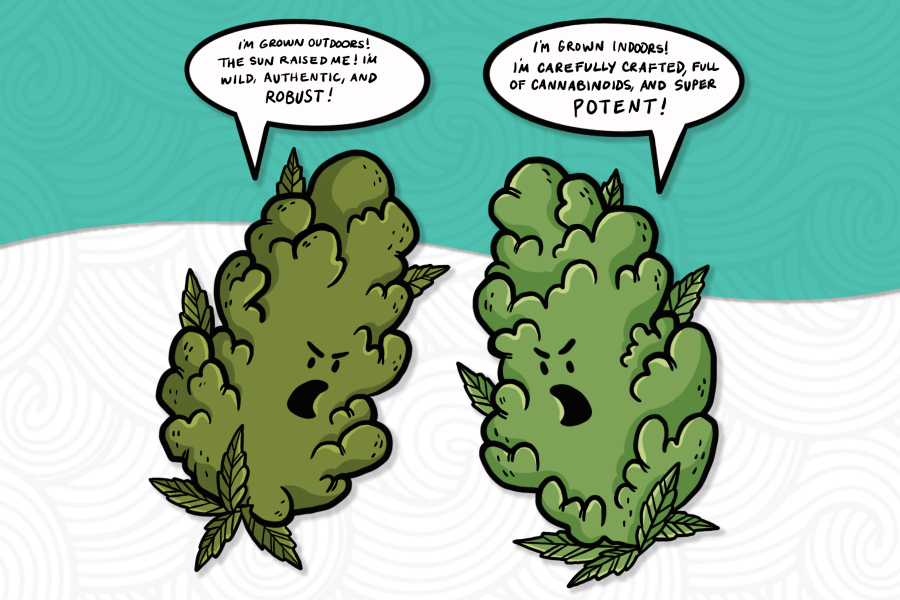 The debate of whether indoor-grown or outdoor-grown cannabis is better has been intense throughout the cannabis community for many years. Regarding which is better, it truly boils down to your personal preference when it comes to things such as taste, aroma, and appearance. However, if you are looking at aspects such as the cost to grow and the experience needed to grow, it really depends on your personal circumstances.

While many aspects such as cannabinoid and terpene content, as well as the effects of cannabis, lie specifically with individual strains rather than how they are grown, there are significant differences in the environmental impacts, and cost to grow indoors vs. outdoors. Let’s take a closer look at some of the ways growing cannabis indoors differs from growing outdoors.

Growing indoors requires much more energy. In fact, a study performed just a few years back estimated that indoor cannabis cultivation sites consume as much as 1% of the entire global energy consumption. All this may not seem like a lot of energy; it is equivalent to putting nearly 3 million more cars on the road regularly. When it comes to the environmental impacts of indoor vs. outdoor-grown cannabis, outdoor grows are much more environmentally friendly in many ways. Aside from energy consumption when growing cannabis outdoors many cultivators do not require the use of pesticides as nature has a way of protecting its own.

Growing outdoors is much more economically possible for many individuals. When it comes to large cultivation sites growing outdoors is typically considered to be much cheaper than growing indoors as you eliminate much of your watering expenses as well as energy expenses as you do not require expensive lighting manipulation or ventilation systems.

Indoor cannabis is typically considered to be much prettier in appearance than cannabis grown in outdoor environments. This is because cannabis grown in the outdoors is subject to exposure to things such as wind, rain, hail, and other environmental impacts. When grown indoors, cultivators have the ability to manipulate the environment so that it is optimal for growing the prettiest plants possible. However, some people prefer the appearance of outdoor-grown cannabis and the organic nature it provides.

Similar to the differences in appearance with indoor versus outdoor-grown cannabis, what is best really depends on your personal preferences. Indoor grown cannabis tends to express a more concentrated terpene profile to that of the strains makeup. Outdoor grown cannabis, however, takes on a very natural and what many describe as being an earthy aroma due to its natural environment.

When it comes to the effects that cannabis provides, it really boils down to the concentration of cannabinoids and terpenes, as well as the spectrum of each that it contains. This aspect is not dependent upon cultivation environments but rather the individual makeup of various cannabis strains.

When it comes to cannabinoid and terpene content, it really is dependent upon the strain being grown. However, some believe that your cannabinoid and terpene content is degraded when cannabis is grown outdoors due to the various environmental hazards they are exposed to. Others, however, will debate that this is not true and that growing outdoors in the plant’s natural environment allows it to grow to its fullest potential.

So, when it comes to the question of whether indoor-grown or outdoor-grown cannabis is better, it really depends upon what you like. Chances are when it all comes down to it what you like will probably be more dependent upon the specific strain rather than where or how it was grown.