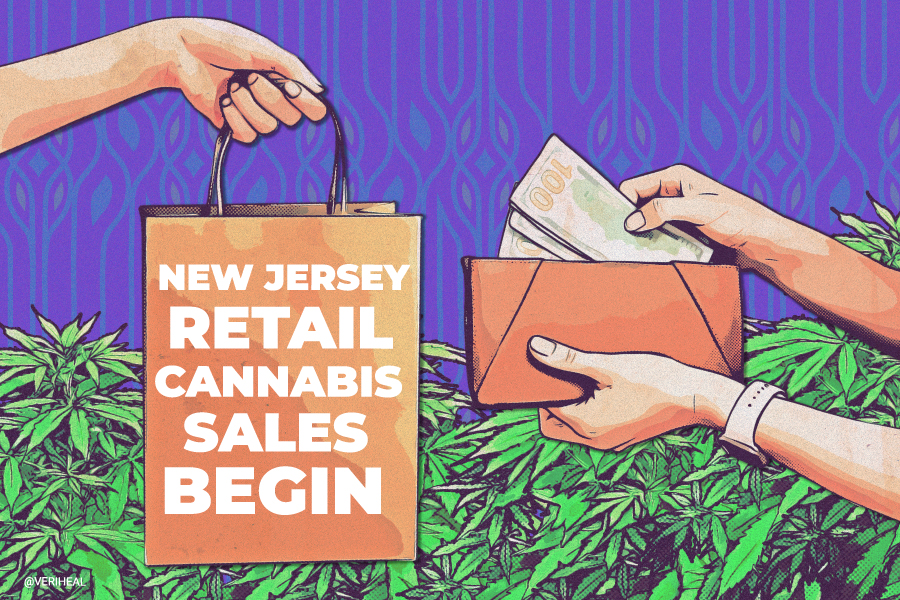 Just a day after worldwide celebrations of cannabis, legal sales of recreational marijuana became for New Jersey residents. On April 21st, 2022, the state opened the doors to recreational cannabis sales within authorized medical dispensaries. Almost 2 million dollars worth of cannabis products were sold on the first day alone!

On the first day of sales, 12,438 recreational cannabis consumers purchased over $1.9 million worth of cannabis products from 12 dispensaries showing a great start for the recreational cannabis market in New Jersey. Before we get into how we got to this historic day though, let’s take a look at the history of legalized cannabis in the state.

The History of Medical Cannabis in New Jersey

The patient registry for the medical cannabis program was not opened again until August 9th, 2012. The first medical cannabis dispensary opened in New Jersey later that year and served its first patient on December 6th, 2012.

Since the legalization of medical cannabis in New Jersey there have been many changes to the program. A bill known as A20, better known as Jake’s law, was signed by Governor Phil Murphy in 2019. It added amendments for home delivery, the expansion of cultivators, retailers, and manufacturers, and increasing the amount of cannabis that was allowed to be purchased and possessed by medical cannabis patients in the state.

Jake’s law also required that the Cannabis Regulatory Commission set up guidelines for the testing of cannabis products. Thanks to this law state-approved labs must test for residual solvents, microbes, foreign material, agricultural residue, heavy metals, and pesticides at the bare minimum. Products that do not pass these tests from state-approved labs are not permitted to be sold.

The medical cannabis program has been quite successful and has served thousands of patients with a wide range of different ailments. However, across the state the fight never ended to bring safe, legal access to cannabis to all adults.

In 2020 voters approved the Marijuana Legalization Amendment, also known as New Jersey Public Question 1.  This was a state constitutional amendment that officially legalized cannabis for adults over the age of 21 and the state.

After a few amendments by politicians, Governor Phil Murphy officially signed the New Jersey Cannabis Regulatory, Enforcement Assistance, And Marketplace Modernization Act. This legalized the possession of up to six ounces of cannabis for adults over 21 in the state. It also set up a marketplace framework to allow for legal sales.

Governor Phil Murphy also signed A1897 and A5342. These bills reduced the penalty of simple cannabis possession under 6 oz for those under the age of 21 and changed it so that minors found in possession of small amounts of cannabis would be subject to written warnings rather than fines or criminal penalty.

Under the current legislation, adults in the state over the age of 21 can legally purchase cannabis at any licensed dispensary, and they are allowed to purchase up to 1 oz with each visit, as long as they do not exceed the 6 oz possession limit. Recreational cannabis sales in the state of New Jersey are subject to a 6.6% state sales tax with the possibility of up to an additional 2% tax depending on what local municipalities implement.

Some medical cannabis dispensaries may offer consumption areas for patients. However, in general, cannabis is only allowed to be consumed by patients and recreational consumers on private property or within the privacy of their own homes.

Many were concerned about the issue of supply and demand and whether or not medical patients would still have access to the medicine they need when recreational sales commenced in New Jersey. On the day prior, medical cannabis patients in the state purchased 5,400 oz of cannabis which is twice the daily average compared to the month prior.

Despite these fears, however, it does not appear that recreational sales are going to have a negative impact on the availability of cannabis for medical patients. In the last month alone, media reports that over 64,000 oz of medical cannabis products have been sold to patients in the state.

“We’ve been preparing many months for this, we’ve tripled our cultivation capacity in the state. We have more than ample supply of available product to service the medical and recreational market… In the event of any shortage of products, we will prioritize our medical patients.” – Matt Darin Curaleaf President

Many dispensaries have also been very outspoken about how, in the event that there became a shortage of products, medical patients would always be prioritized. Some will also be offering lines and cashiers dedicated to medical patients as well as special daily hours where only medical patients are permitted. Have you purchased cannabis from the newly implemented retail cannabis market in New Jersey or are you a patient in the state with concerns? If so we would love to hear from you in the comments below!