Home News Study: Cannabis Use Not Associated With Heart Abnormalities Among Middle-Aged People

If you search the term “cannabis and heart health” on Google, you’ll notice that the results are flooded with pages upon pages of claims about the plant’s allegedly negative impacts on cardiovascular health.

But just how true are these claims? Is the cannabis plant a true culprit for poor heart health? Well, according to a team of researchers from the United States and Switzerland, the cardiovascular outcome of using the plant is actually quite positive.

In fact, based on the results of their recently published investigative study into the subject of cannabis and heart health, the team hypothesized that occasional and lifetime cannabis consumption habits were not associated with an increase in heart abnormalities among middle-aged people.

Titled, “Association Between Current and Cumulative Cannabis Use and Heart Rate. The Coronary Artery Risk Development in Young Adults (CARDIA),” the study was published in the American Journal of Medicine. It discovered “no evidence that current or lifetime cumulative use of marijuana was associated with a higher prevalence or incidence of major or minor ECG abnormalities.”

However, the writing group leader Robert L. Page II, Pharm.D., M.S.P.H., FAHA noted that public attitudes and perceptions towards recreational and medical cannabis use have transformed rapidly—something that he attributes to the rise of medical and/or recreational legalization across the U.S.

“Health care professionals need a greater understanding of the health implications of cannabis, which has the potential to interfere with prescribed medications and/or trigger cardiovascular conditions or events, such as heart attacks and strokes,” added Page, who also serves as the professor at the clinical pharmacy division and department of physical medicine/rehabilitation at Aurora-based University of Colorado Skaggs School of Pharmacy and Pharmaceutical Sciences. 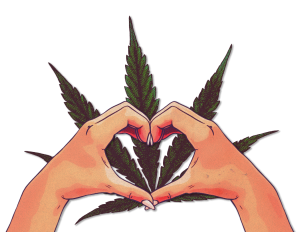 Cannabis and Heart Health: What Did the Researchers Discover?

To ensure their findings provided an accurate insight into occasional and lifetime cannabis consumption habits—which, they purport, did not directly influence cases of heart abnormalities among middle-agers—the group of American and Swiss researchers considered numerous factors in study recipients.

For example, when assessing the responses of 2,585 middle-aged participants, the group considered variables like alcohol consumption, age, body mass index (BMI), physical activity, sex, and tobacco consumption. All of the study respondents were located in four different U.S. communities.

Whereas some of the respondents claimed to currently be using cannabis, others reportedly had tried it (in some form) at sporadic intervals during their lifetime. Specifically, 85% of the study subjects admitted to having been exposed to cannabis at some point in their life, whereas 11% of them were current users.

Taking these facts into account, the study authors wrote that “ECG abnormalities seemed to be less frequent in current marijuana users.” ECG abnormalities are identified by unusual variations of the heart’s natural rhythm.

Of the study’s respondents, 173 had been diagnosed with significant heart abnormalities, whereas 944 had less concerning ones. Since middle-aged people are more likely to develop heart disease, it’s important for people in this age group to practice caution when consuming cannabis.

“This adds to the growing body of evidence that occasional marijuana use and cardiovascular disease events and markers of subclinical atherosclerosis are not associated,” explained the researchers.

Just because cannabis use is not heavily tied to heart abnormalities in middle-aged people, this does not necessarily mean that it will strengthen cardiovascular health. Based on the scientific evidence that currently exists, cannabis consumption could spark an increase in cases of atrial fibrillation, cardiac arrhythmias, heart attacks, stroke, heart disease, heart failure, and blood vessel inflammation.

Plus, if the findings of an investigation published in the Journal of the American College of Cardiology in January of 2020 are anything to go by, cannabis use also could be associated with a wide range of risks to the blood vessels and heart.

“Marijuana is becoming increasingly potent, and smoking marijuana carries many of the same cardiovascular health hazards as smoking tobacco,” wrote the authors, who were led by cardiologist at Boston-based Brigham and Women’s Hospital, Dr. Muthiah Vaduganathan.

Conversely, based on a scientific statement published in the American Heart Association‘s flagship journal Circulation on Wednesday, Aug. 4, 2020, cannabis-containing products do not generally provide any perks for heart health.

A section of the publication hones in on the connection between cardiomyopathy (heart muscle dysfunction) and cannabis smoking/inhalation. The Association states that smokable/inhalable cannabis may trigger cases of cardiomyopathy; regardless of THC potency.

Although the importance of carrying out additional studies on the subject of cannabis and heart health cannot be ignored, consumers shouldn’t necessarily refrain from loading up on the plant’s active cannabinoids. Rather, consumers ought to choose their method of consumption wisely.

Understanding the Safest Modes of Cannabis Use

Of all the methods of cannabis use that a consumer can choose from, smoking is deemed to be the most harmful. Vaping concentrates (think vape pens), despite offering fast-acting effects, may also pose a health hazard. On the other end of the spectrum, ingestion (edibles) is considered to be the least harmful way of filling up on cannabinoids.

Regardless of the way you choose to consume cannabis, all modes of delivery carry some level of risk. Examples of some recommended alternative methods of cannabis consumption/administration include:

In whatever way someone chooses to consume cannabis, he or she must be aware of the legalities associated with the plant, which is deemed to be a Schedule I drug by the U.S. Drug Enforcement Agency (DEA).

Because of the federally illegal status of cannabis, scientists are confined in terms of what they can study. Until more research is conducted, consumers are advised to consult with their healthcare practitioner about the benefits and prospective risks of using medicinal-grade cannabis.