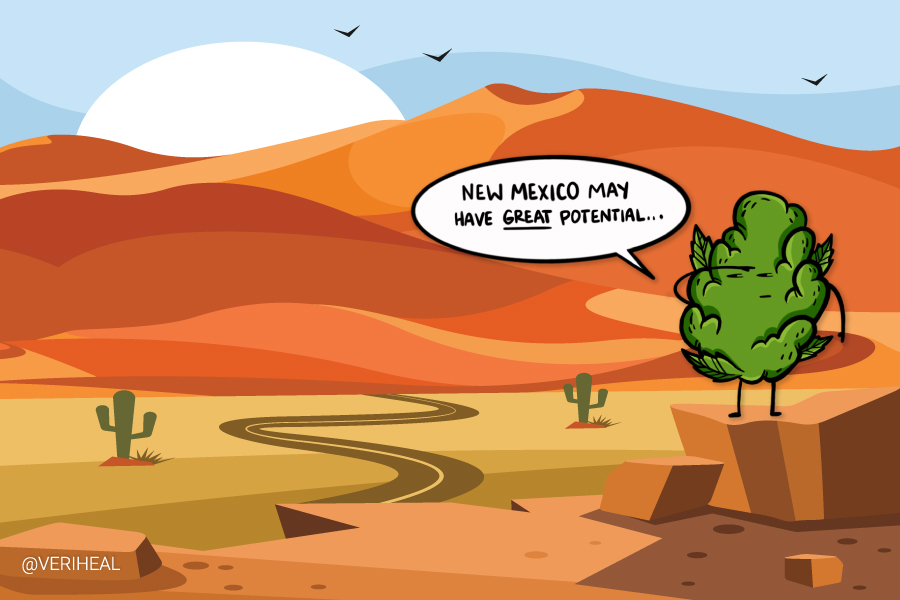 Many people believe the state of New Mexico would stand to greatly benefit from reforming cannabis laws for adults in addition to the states existing medical cannabis program. 2021 might just be the year that gets done. According to supporters of cannabis in New Mexico, the state could generate hundreds of millions of dollars in potential revenue via retail legalization.

Albuquerque, New Mexico, has been the center for State lawmakers discussing the potential financial revenue they could generate by legalizing recreational adult-use cannabis. Duke Rodriguez, the President, and CEO of Ultra Health, one of the largest medical cannabis companies in New Mexico, believes legalizing recreational cannabis would help generate an estimated $800 million per year. This raises the stakes $200 million from previous estimates of around $600 million. Rodriguez went on to say,

“I think we will be a powerhouse, not only within the state, but we have the potential of being a powerhouse not only in this country but you’d be surprised, we have the ability to also compete internationally.”

The US House of Representatives recently voted on and passed the MORE Act. But the Senate has still yet to vote on the measure. Currently, the United States is missing out on a budding global cannabis trade that is continually cultivating success. By removing draconian federal restrictions on cannabis, doorways would open up, allowing Americans to participate in the global cannabis trade. This could be some of the best news New Mexico has heard in a long time when it comes to increasing the financial revenue of the state as well as the overall per capita income of residents.

The Strengths of Legalization

Supporters of legalizing recreational adult-use cannabis in the state of New Mexico like to point out strengths supporting legalization, such as the creation of an estimated 13,000 plus jobs as well as an influx of millions of dollars to the local economy. Representative Javier Martinez of District 11 was quoted saying, “I believe the time is now, I believe New Mexico is at the cusp of being a national leader in recreational cannabis legalization, and I am looking forward to making that happen.” Martinez is leading the current effort to legalize retail adult-use cannabis in New Mexico, with the subject hitting the table on the next 60-day legislative session that starts on January 19th of 2021.

The Current State of Things in the New Mexico Green Scene

Patients in the state of Mexico are currently allowed to have 8 oz. of flower during a 90-day period. They are allowed to grow 16 plants at home, with four in the flowering stage and 12 in the veg stage. There are state-licensed dispensaries currently serving the medical cannabis community in New Mexico as well. The state does allow for caregivers and is said currently to have an estimated 98,507 registered medical cannabis patients, according to information from the New Mexico Department of health.

In February of this year, New Mexico Governor Michelle Lujan Grisham signed Senate Bill 139 that was sponsored by Senator Gerald Ortiz Y Pino. This restored the original definition of a qualified patient in New Mexico and also set laws for reciprocal patients to participate in New Mexico’s medical cannabis program.

Cannabis Could be Vital to Increasing Per Capita Income

New Mexico is ranked among the poorest states in America when it comes to per capita income. It’s reported that an estimated half of New Mexico’s economy comes from the service sector, while the other half is made up of extractive industries such as oil production and mining. Making the switch to the green industry of full recreational and medical cannabis legalization could help significantly improve the per capita income across the state of New Mexico.

The tourism industry in New Mexico could see high hopes as the state’s landscape is a spectacular one blanketed by white rolling sand dunes, beautiful, picturesque wilderness landscapes, and forested mountains. These are major attractions to many different cannabis consumers who love nature and the great outdoors.