A Massive Study Further Confirms That Spice Is Terrible for You 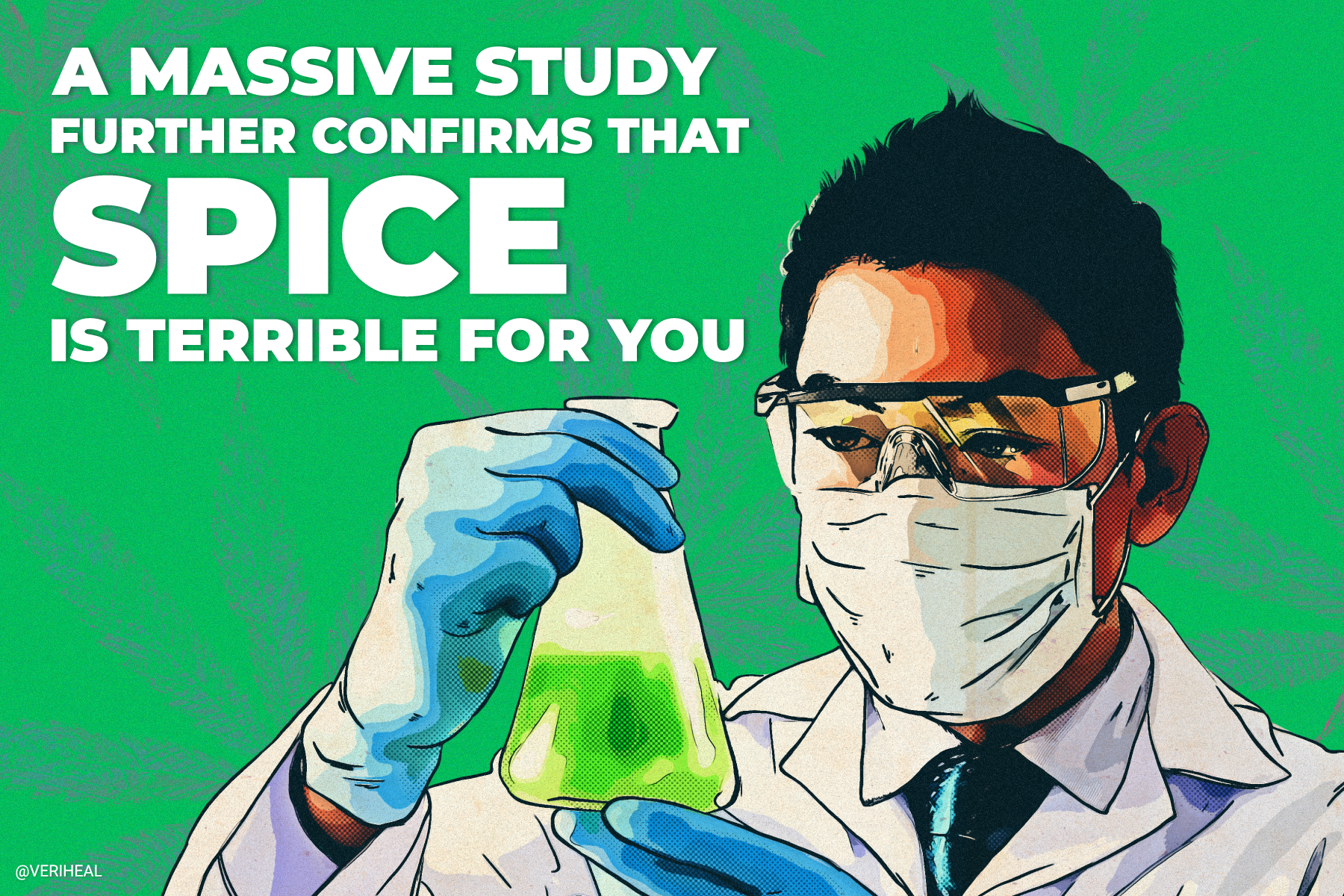 ‘Spice’, or ‘K2’, is a substance often made up of synthetic cannabinoids. While we have already uncovered that this street drug is associated with serious health problems and adverse side effects, the largest study to date has just reinforced what we already know: Unlike cannabis, spice is extremely harmful.

This large-scale study was published in Psychopharmacology. It was conducted by psychologists from the Addiction and Mental Health Group, the department of psychology at the University of Bath. According to the study, ‘Spice,’ contains “synthetic drugs originally designed to mimic the effects of cannabis,” and it is “more harmful than cannabis and that users are likely to experience more severe withdrawal symptoms when attempting to quit.”

The university explains that ‘Spice’ is a colloquial name given “to a class of drugs known as ‘synthetic cannabinoid receptor agonists,'” or SCRAs. The university goes on to say that, “these drugs are produced synthetically and are typically sprayed onto a herbal material, which looks similar to cannabis and can be smoked.” This means that what makes spice mimic cannabis is the synthetic spray deposited onto man-made plant lookalikes.

Spice is easy to access and is easy to miss on drug tests, which makes it a chosen alternative to cannabis. However, the risks associated with consumption of spice make it worth of avoiding.

What Did the Spice Study Find?

The large-scale study included responses from 284 participants in the Global Drug survey. These participants all have previously attempted to abstain from Spice. The press release explains that the assessments were designed to indicate how likely a drug is to result in long-term harm, how long the effects last, and how quickly the tolerance develops.

The study explains that Spice and cannabis both work on the same brain receptors. However, since Spice is more potent, it is easy to get addicted and suffer from withdrawal symptoms. The press release defines withdrawal as, “the experience of unpleasant symptoms when abruptly stopping or decreasing the intake of a drug which has been used in large amounts for a long period of time.”

According to the press release, researchers found that over two thirds (67%) of the participants they observed who have tried to quit spice, “reported experiencing at least three withdrawal symptoms after attempting to quit, including sleep issues, irritability, and low mood.” Researchers noted that this was significantly worse than those who tried to quit cannabis.

The Experts’ Conclusions About Spice

The respondents consistently reported that the effects of Spice were more harmful than cannabis, and that the effects came faster but left sooner. The study also found that tolerance build up to Spice happened faster than it would for cannabis. This translated into consumers of Spice having to consume increasingly larger doses in order to get the same effects.

Sam Craft, lead author and PhD student, explained that, “Although originally produced as a legal alternative to cannabis, our findings show that Spice is a far more harmful drug and people attempting to quit are likely to experience a range of severe withdrawal symptoms. It’s therefore important that greater effort is made to ensure that Spice is not used as a substitute for cannabis, or any other drug, and people experiencing problems with Spice should be supported with treatment.”

Additionally, Dr. Tom Freeman (Director of the Addiction and Mental Health Group at the University of Bath) added that, “These findings identify severe withdrawal symptoms as a key clinical problem among people using Spice, and highlight the urgent need to develop effective treatments to help people quit.”

A Device to Detect Spice

Earlier this year, researchers were awarded £1.3 million in funding to develop a portable device that detects Spice on the spot. Spice has become most common among low-income, and incarcerated individuals.

The current goal is to use the new technology in clinical settings, prisons, and across police services within three years. This is an important development, because at the moment there is no point-of-care test available that has the ability to detect Spice on the spot.

The team at Bath University developed a prototype in 2019, which was able to detect the drug from street material and in Saliva in less than five minutes. Dr. Chris Pudney from the university explained that, “faster testing is essential if users are to receive treatment and harm-reduction interventions.”

Dr. Pudney went on to say that, “There is no way of knowing if Spice has been taken if someone presents with psychosis or intoxication symptoms that could also be due to other reasons. So we see the detection technology as a way to inform care in case of overdose.”

The Negative Impact of K2 on Marginalized Communities

Dr. Pudney emphasized the drug’s detrimental impact on marginalized communities saying that, “Spice is endemic in homeless communities and prisons. It’s highly potent and addictive, and poses severe health risks to users including psychosis, stroke, epileptic seizures and can kill. We want to deliver a detection system both to raise the prospect of rapid treatment and to stem the flow of drugs in these communities.”

Another concern is an alarming amount of recent reports of children mistaking Spice for cannabis. “We hope to combine this technology with a deeper understanding of the communities that use Spice so that we can deploy the Spice-detecting technology in the most effective way possible to benefit the most vulnerable in society,” said Dr. Pudney. “Our ultimate aim is to save both money and lives.”

We already know that synthetic cannabis like spice and K2 are more dangerous than cannabis, and that it can cause a whole list of adverse side effects. The research is finally catching up to support what many may have already known, which will hopefully further reinforce caution and avoidance of the substance. Be cautious of purchasing cannabis from the black market, as Spice could easily be supplied instead. To be safe, stick to dispensaries and other trustworthy cannabis suppliers.