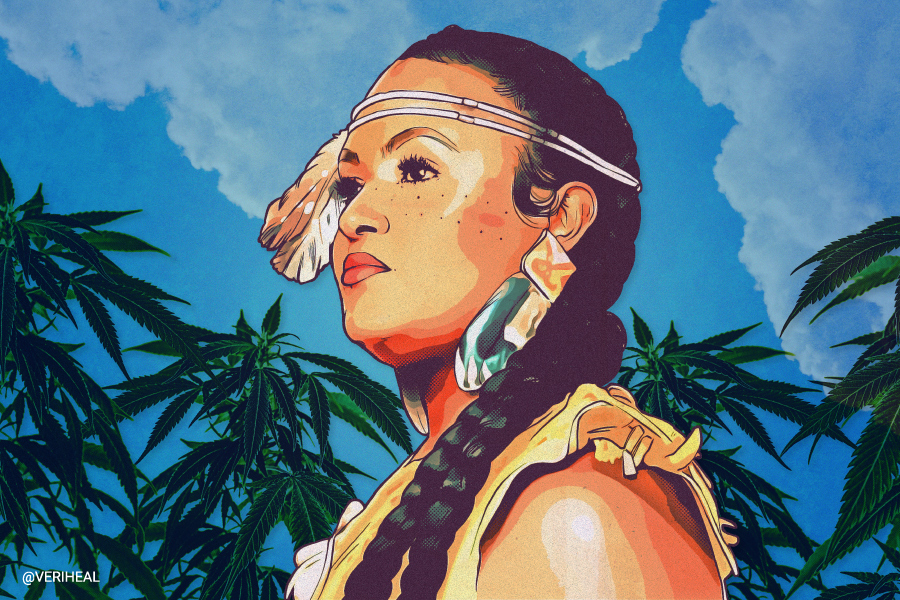 We all know that cannabis has been around for a very long time, but most of us have little understanding of the ancestral wisdom surrounding it. Native American historian, activist, and businesswoman Chenae Bullock is making sure we don’t forget the ancestral roots of this multi-purpose plant by bringing it into mainstream cannabis.

Native tribes are increasingly getting involved in the modern cannabis industry, with many of them having been granted the right to conduct their cannabis business due to the 2014 Department of Justice memo allowing recognized tribes to operate without prosecution.

The 2014 Department of Justice Memo

The memo begins by explaining that the “Cole Memorandum provides guidance to United States Attorneys on the proper prioritization of marijuana enforcement in their districts given the number of states that have moved to legalize marijuana for medicinal, agricultural, or recreational use.”

It states that law enforcement, including each U.S. Attorney, should keep the Executive Office for U.S. Attorneys, the Office of Tribal Justice, and the Office of Deputy Attorney General informed about disputes regarding cannabis in tribal areas and that the matters should be handled on a government-to-government basis.

According to Bullock, “Cannabis has been a gateway to Indian country for a lot of people, for a long time. We’ve had cannabis laws since before this country was a country. What’s different now is the incentive for businesses to want to work with tribes on cannabis.”

Federal law enforcement is limited to the priorities put forth in the Cole Memorandum in terms of action that may be taken against tribes regarding cannabis. Most of the priorities center around preventing harm, criminal enterprises, use on federal property, and so on. However, tribes mostly use cannabis for rituals based on their ancestral wisdom.

Bullock is a historian and cultural preservationist as well as an enrolled Shinnecock Indian Nation Tribal Member who descends from the Montauk Tribe in Long Island, New York. She is currently the managing director of Little Beach Harvest, an indigenous medical cannabis operation located on the tribal lands of the Shinnecock Nation.

Bullock considers cannabis a crucial part of her life, especially since she grew up with it. She explains that her grandfather used to grow cannabis on their family land and her grandmother used to cook with it. She spent a large portion of her time with elders in her tribe who were activists for cannabis as plant medicine as well as activists for cultural preservation and maintaining honored traditions.

“My mom always made sure I spent time with the elders first when I was young—staying with them, helping them around the house, learning from them and hearing their stories,” she stated. “As I got older and started to find my own voice, I started speaking out more about the desecration of our ancestral burial sites and seeking out the people behind efforts like establishing the National Day of Mourning. Watching these elders age and pass on, it’s compelled me to pick up that torch.”

“Being in this business is not about the profit, it’s about the change. We’re talking about a sacred plant. Sometimes when we talk about the business of cannabis, we leave out the conversation of the sacredness of the plant, as well as the fact that the people who have cultivated the plant, those who understand the uses and have words in their language to describe those uses are us: Indigenous peoples. And that’s something that we don’t want to lose sight of.”

The Shinnecock Nation and Cannabis

In her interview with Honeysuckle Magazine, Bullock highlighted the complex situation surrounding cannabis views in the Shinnecock Nation, a U.S. tribal community that has quickly become influential in the cannabis space. According to Bullock, many of the nation’s members are working hard for access to the sacred plant’s healing properties, while older members remain heavily affected by the outcomes of the war on drugs.

“A lot of us aren’t from the generation that experienced the height of the War on Drugs, so we don’t really know what they went through at the time,” she explained. “We have elders, people in our community, that don’t believe that this plant is a sacred plant. They don’t believe it is something that should be legalized. Now, that might be the manifestation of forced assimilation…or it could be because their family members are currently locked up in Suffolk County.”

Bullock’s organization has established its own Cannabis Regulatory Division with Shinnecock board members. The division and its board members are already working on issuing licenses for growing and distribution. Bullock explains that this opportunity is a way to try and balance the scales for Native commerce.

She told Thrillist, “The first commerce in the state of New York began on the shores with our people’s whaling businesses, our fur trade, our wampums. What happened was we were left out of that market when wealth began being built. There is an opportunity right now to be able to catch up in regards to commerce, through cannabis.”

Unfortunately, tribes are unable to access social equity programs for their cannabis operations, which significantly limits the extent of their operations. However, Little Beach Harvest has recently announced a partnership with the multi-state operator TILT Holdings. The partnership between the two parties allows the tribe to bring its ancestral wisdom to the modern-day cannabis industry and overcome this red tape.

TILT is a global provider of cannabis solutions in the realms of technology, cultivation, manufacturing, brand development, and more. In the partnership announcement, TILT stated, “We are proud to help create an entry into the cannabis industry that will be impactful for the Shinnecock Nation…to date, Indigenous people have been largely excluded from the social equity conversation across the country. This partnership—which is a true partnership in every sense—is a step forward in creating social equity for the Nation.”

“It comes back to inherent responsibility,” Bullock said. “It’s not even about my family or just Shinnecock. It’s about inclusion of Indigenous voices and leadership in an industry that we’ve already been doing on our lands for decades. It’s about implementing real change at a crucial time in this new industry and preserving this ancient plant medicine that could really heal the world in many ways.”

Politics Aside, Social Media Remains a Giant Adversary for Cannabis