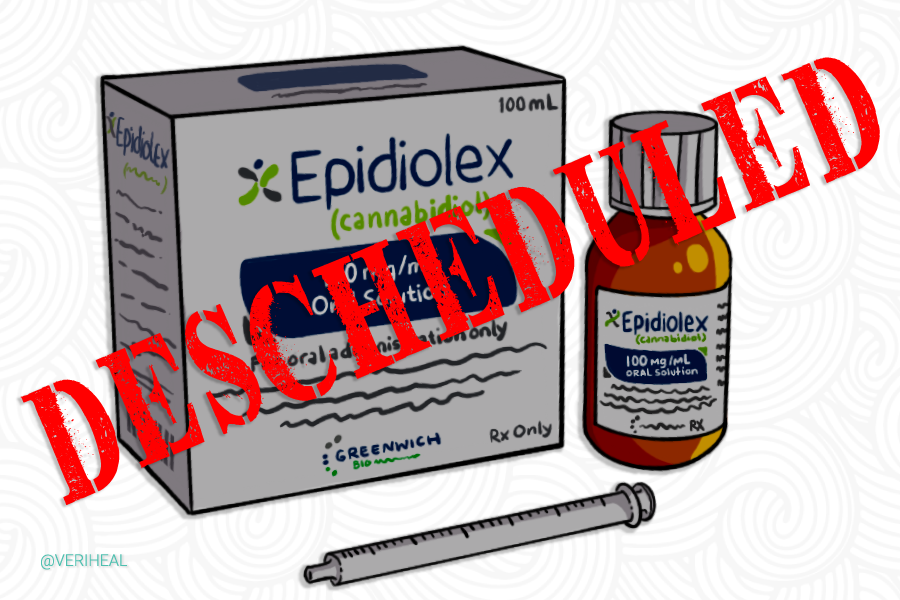 For many years the federal government has remained firm on their stance against cannabis, stating that it has no medical use, thus supporting their continued prohibition against the plant. While doing so, they have also held the patent on CBD and its neuroprotectant and antioxidant properties. Throughout the past decade, however, many things have changed when it comes to the legality of cannabis. In 2018 the FDA approved a cannabis-derived pharmaceutical drug that contains CBD by the name of Epidiolex.

In 2018 when the DEA approved the drug initially, it was classified under a schedule V substance. However, at that time, CBD itself as a single compound remained highly illegal and classified as a schedule 1 substance. Later that year, when the US Congress passed a 2018 Farm Bill legalizing hemp CBD derived from hemp was removed from the list of controlled substances as long as the hemp in which the CBD was derived from contained less than .3% THC. With a pharmaceutical drug being approved that includes CBD as an active ingredient prevents it from legally being added to food and beverages, an issue the US Food and Drug Administration is still addressing.

While it is extraordinary that the DEA has finally acknowledged the safety of CBD therapies, the cost of accessing this medicine is quite extensive. A single physician’s prescription Epidiolex is around $32,500 per year. While the company declined to provide any specifics regarding insurance reimbursement, the US Chief commercial officer Darren Cline stated that they were “pleased with payer coverage.” He also said that there has been an escalation in that area, seeing it go from more restrictive to a little more open in recent days and that the payer community seems to be very favorable to the utilization of Epidiolex for LGS and Dravet Syndrome patients.

A Statement from GW Pharmaceuticals

GW CEO Justin Gover stated the following in a recent public statement regarding this change and DEA scheduling.

This notification from DEA fully establishes that Epidiolex, the only CBD medicine approved by the FDA, is no longer a controlled substance under the federal Controlled Substances Act. We would like to thank DEA for confirming the non-controlled status of this medicine. Importantly, the descheduling of EPIDIOLEX has the potential to further ease patient access to this important therapy for patients living with Lennox-Gastaut Syndrome and Dravet syndrome, two of the most debilitating forms of epilepsy.

There are many benefits to the DEA descheduling this drug. Not only will it be easier to obtain by prescription, but it could also open the door for more insurance companies to pay for the drug and allow for more doctors to prescribe it. It could also enable more pharmacies to keep the medication in stock and require less security for those doing so. According to company officials, the descheduling of Epidiolex also allows physicians to prescribe this breakthrough medicine free of the requirements of State prescription drug monitoring programs.

An Unlikely Path for Broader Change

While many would hope that this change in legality of CBD therapies could lead to a broader shift in regulations surrounding the full plant, however being that the government has been very vain in their exceptions for cannabinoid therapies in the past, many do not see this being a change that could lead to a greater path of reform.

The legalization approval of Cannabis is under FDA. Epidiolex had been used to treat epilepsy, mainly the seizures. Because there are two rare medical conditions, Dravet and Lennox-Gastaut syndromes characterized by severe recurrent seizures that fail to respond to treatment with conventional anti-epileptic drugs. The issue is of less pieces of evidence of effectiveness from research based on medical Cannabis. Though FDA has legalized Cannabis in 43 states but still today, many people in need are deprived of necessary treatment. There are many cases of relief from Cannabis. The government should have some strict rules for the distributors and consumers if there is any issue in legalization or the fear of drug misuse after legalization. If not, some medical rehab centers should be introduced just for Cannabis patients with conditions to be treated. So that dosage and usage could be monitor, and the fear of misuse could minimize this way.