Home Lifestyle Dropping in on the Dope: Cannabis’ Place in Surfer Culture

Dropping in on the Dope: Cannabis’ Place in Surfer Culture 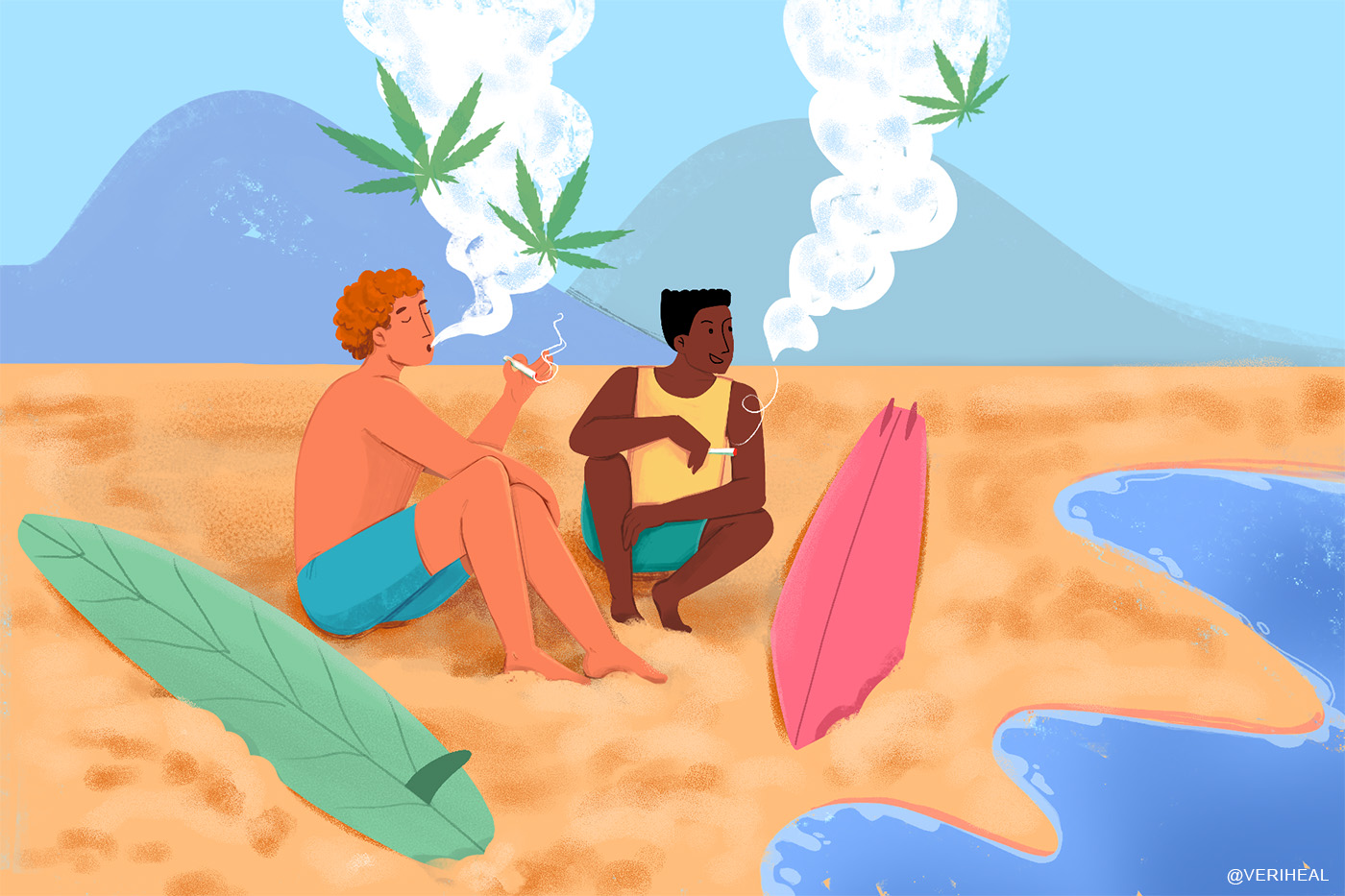 The World Surf League (WSL) 2022 Championship Tour is well underway, and in the midst of the barrels and bottom turns, there are sure to be many surfers and spectators blazing up a joint. So, what is cannabis’ place in surfer culture exactly?

Just like cannabis is a way of life for millions of people around the world, so too is surfing. According to the Surf Industry Manufacturers Association (SIMA), there are approximately 17 million to 35 million surfers globally.

What Is Cannabis’ Place in Surfer Culture Today?

For many wave-slicing athletes, the green plant serves as a vital supplement (and indulgence) that may help to speed up muscle recovery, boost focus, and ease anxiety ahead of the big swell. Oh, and did we mention that cannabis can relieve tissue swelling, too?

In addition to being athletes and ocean lovers, surfers have developed a reputation for being rebellious and a part of the counter-culture. Cannabis consumers were often anti-establishment and part of countercultural movements during the past several decades. So, it comes as no surprise that the worlds of surfing and cannabis intersected.

Now, as legislation spreads across the globe, many surfers are even advocating for cannabis. One example is Brad Domke, who recently got sponsored by cannabis technology company Superbad Inc.

Let’s explore the benefits of cannabis for surfers and cannabis’ place in surfer culture in more depth. Specifically, we will look at the perks of using cannabis’ non-psychotropic compound CBD (cannabidiol) and its psychoactive cousin THC (tetrahydrocannabinol).

THC for Surfers: A Colorful Past

If we rewind to the year 1943, Time Magazine published its first article on the subject of cannabis. The news piece centered around the herb’s migration from Mexico via the rapidly growing jazz scene. This timing coincided with the rise of foam and fiberglass surfboard production across California, where breeders and cultivators have produced strains with upwards of 30% THC and 0% CBD.

THC is a therapeutically abundant cannabinoid that can enrich the surfing experience. Studies suggest that THC triggers the release of a chemical called dopamine, which gives users a feeling of relaxation and euphoria – ideal for enhancing the surfing experience. Moreover, THC has been shown to disrupt signals between neural pathways in the brain that process pain.

For hundreds of years (or maybe even longer) members of Hawaii’s world-famous surf culture have maintained a strong passion for smoking what the natives call “pakalolo”—”paka” means “tobacco” and “lōlō” refers to the THC’s numbing effects.

Hawaii’s surf scene drifted to California in the 1950s, at which point hordes of surfers became accustomed to the cannabis counter-culture movement that fully erupted 1964. Stories also suggest that active participants of the hippie scene—many of whom were surfers—in the 1960s smuggled THC-rich seeds from Mexico and Central America.

CBD for Surfers: A Bright Future

By 2028, the global CBD market is estimated to be worth USD $47.22 Billion. CBD is one of hundreds of diverse compounds present in the cannabis plant. In particular, hemp—a non psychoactive species of cannabis—tends to grow with an abundance of CBD. CBD does not have the psychoactive effects that THC is known for. Nonetheless, the cannabinoid is capable of inducing feelings of calmness, relaxation, and serenity in its users. Additionally, it promotes an affluence of therapeutic effects on the body and brain.

The cannabinoid works by targeting receptors scattered around the endocannabinoid system (ECS). Found inside the body of all living mammals, the ECS’ primary purpose is to maintain homeostasis in the body by regulating key functions such as sleep, mood, hunger, memory, pain perception and more.

Former president Donald Trump’s signing of the 2018 Farm Bill, combined with sweeping legalization across the U.S., has bolstered the accessibility and popularity of CBD. Although the cannabinoid has gained a lot of newfound attention over the last few years, it is by no means new to humankind.

While they might not have known that they were consuming CBD, the ancient Chinese and Indians were believed to have relied on the medicinal compound as a staple in natural medicine. However, it wasn’t until 1963 that CBD’s structure and stereochemistry was determined. Ongoing research efforts have since thrust this cannabinoid to the forefront of modern medicine.

In terms of its use in the surfing sphere, CBD’s natural anti-inflammatory effects may help to relieve swollen and sore muscles. Plus, the cannabinoid possesses pain-fighting capabilities, which may speed up the recovery process for surfers who endure dislocations, sprains, fractures, reef cuts, and surfer’s ear.

When it comes to the professional athletes who regularly participate in competitions, CBD offers the perfect aid for quieting the mind and stimulating focus. This wellness tool may also help to promote a good night’s rest ahead of a day in the ocean, as confirmed in this study published in frontiers in Molecular Neuroscience.

In summary, cannabis may offer a whole host of mental and physical perks that can strengthen a surfer’s connection with the ocean. However, CBD appears to be the most therapeutically abundant cannabinoid in terms of improving surfing performance and recovery.

As we learn more about this cannabinoid’s place in the medical industry, it’s likely that we will begin to see more surfers signing sponsorship deals in the CBD space. Conversely, since THC is more strictly regulated than CBD, it may not be wise for some surfers to go down this route unless they are residing in a cannabis-friendly state.

It should be noted that the legality of cannabis is currently limited to just a handful of the world’s top surf spots. With that being said, rippers residing in, or traveling to, cannabis “red zones” for their surfing fix—such as Bali and the Maldives—ought to practice caution so as to avoid a run-in with the law.