How Our Founding Fathers Used Cannabis in Colonial America 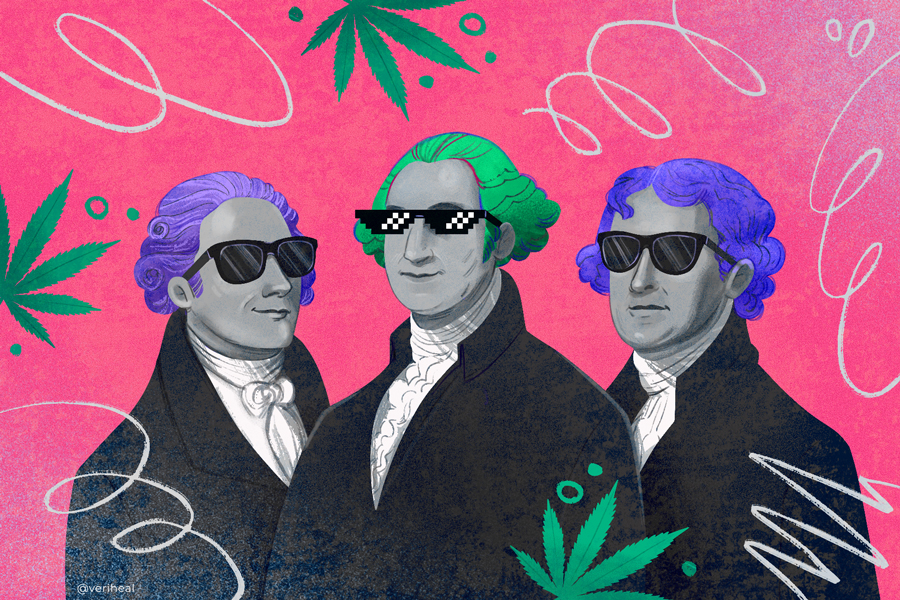 Indulging in cannabis is an American pastime. It is also a growing trend in the world of alternative and natural medicine, as seen in the wave of legalization happening across the states. Perceptions—once of a negative sort—are shifting towards acceptance, compassion, and understanding. From budding support to a freshly positive portrayal in American culture, cannabis is fast becoming a part of daily life for many in the United States.

But many do wonder: Is there a historical component to America’s fascination with the beautiful green plant? Did any famous colonial icons—from the Founding Fathers to the early presidents—smoke bud?

The answer is not what you’d expect.

Early reports of cannabis in America date back to Jamestown, the first permanent English settlement in the New World. However, the settlers were not bunkered up in their wooden homes, toking up and daydreaming of warmer days and more food. Rather, the settlers grew hemp to be used in manufacturing.

The folks at Jamestown found many uses for hemp. For starters, Jamestown was a waterside colony. Sailing was a part of day-to-day life. Fish were of great importance to the settlers as food from the land could get rather scarce during the harsh winters in those early, formative years of English colonization of what would become the United States of America. Many ships of that era needed sails, and those sails needed to be sturdy.

Thankfully for the colonists at Jamestown, hemp was found to be of great use in crafting sails. Hemp yields a strong fiber that is ideal for the rough winds and waters that sailing ships endure. And not only did hemp provide the sailors with firm sails, but it also offered a strong rope. Rope, of course, has plenty of uses, and in those days, one could not simply head off to a hardware store if said rope split or came unwound while working. Early settlers relied on hemp rope for a plethora of reasons, but the number one reason was that hemp rope was strong, reliable, and relatively easy to produce.

Hemp rope itself dates back nearly 5,000 years ago to early Chinese pottery on which hemp rope was depicted. This early adoption of hemp is indicative of the plant’s vast uses and power as a crop, a tool, and a step toward quality manufacturing. It should also be noted that the oldest dated material of early man is a piece of hemp fabric that dates back to around 8,000 BCE. Hemp has been around nearly forever (in a history-of-civilization kind of way) and will continue to stick around for as long as humans find uses for it. And the uses are plenty.

Aside from hemp rope and sails, early colonial folk used hemp for threads for sewing, cloth for clothing and bags, and paper. The latter, hemp paper, holds especially high regard in United States history, for it was on hemp paper that the Declaration of Independence was written and signed by the Founding Fathers. Without a passion and need for hemp, perhaps the Declaration would’ve been more of a verbal shout toward the general direction of Great Britain.

Despite the many daily uses that hemp found, there is little evidence to suggest that hemp or cannabis was smoked by English colonists and early Americans. Perhaps they did, as records date back centuries of cannabis being used both as a recreational substance and a medicinal tool, and knowledge of these uses was sure to have passed along through time and continental distances. However, the plant found a much more necessary use in crafts, manufacturing, and farming than it did as a way to self-inebriate.

Did Any Founding Fathers Smoke Cannabis?

The question as to whether the likes of George Washington, Thomas Jefferson, or Benjamin Franklin smoked cannabis or not is iffy at best and unknown at worst.

Thomas Jefferson, for example, was known to have dedicated “an acre of the best ground” of his land to hemp. George Washington, too, cultivated hemp, though he also used it solely for industrial purposes. One must also note that the levels of THC found in this early industrial hemp were so low that it is more likely that one wouldn’t even experience intoxicating effects through smoking it. Coupled with the notion that these men were running large farms and responsible for manufacturing a nation, it is safe to say that Washington and Jefferson didn’t partake (though it is impossible to say whether or not they didn’t at least try or experiment with their many plants).

Benjamin Franklin seems to pop up often when the question surrounding the early American thinkers and cannabis arises. There is a popular belief that Franklin was indeed a bit of a cannabis connoisseur. This more than likely stems from the fact that Franklin owned a hemp paper mill, and a large one to boot. He was also known to be quite the philosopher and Renaissance man, so one might assume that he loved to partake. There are rumors where he is mentioned to have been caught high as a kite with another upper-class woman, in a bathroom, with foolish smiles on their faces. While there’s no way to confirm this story, it sure is fun to think about.

Even though the lack of strict evidence of early Americans smoking cannabis is difficult to come by (or simply doesn’t exist), one must remember that the U.S. continues to grow and accept cannabis as a tool for recreation and natural medical treatment. This is something to be thankful for, as it could spell the eventual end of criminalizing those who choose cannabis as their intoxicant or medicine of choice.

With Thanksgiving approaching, it is also wise to remember where we as a nation came from and where we are heading. Yes, U.S. history is littered with handfuls of unsavory events: stolen land, wrecked cultures, discrimination, social strife, inequality, and more problems caused by human greed than there are grains of sand in a gravel parking lot outside of Waffle House. That being said, the U.S. is also home to a rich, diverse, and unique cultural landscape where true unity does exist at its heart. It is a melting pot, after all.

This Thanksgiving, consider how cannabis has shaped your life and your well-being. Note the positives. Remember the sharing and the friends and the good times. Remember the healing. Spread that compassion and help cannabis acceptance grow as the nation continues to grow as well.

“There are rumors where he is mentioned to have been caught high as a kite with another upper-class woman, in a bathroom, with foolish smiles on their faces”

What bathrooms? There was no indoor plumbing. No toilets. Did he get nasty in a outhouse?