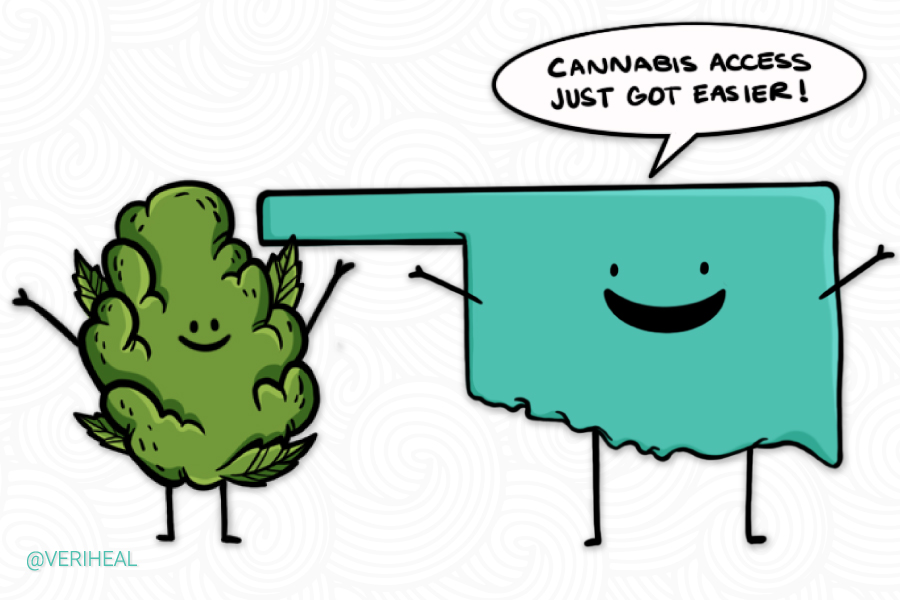 Just a few years ago, the state of Oklahoma had some of the most restrictive laws surrounding cannabis. If you were to ask just about anyone who lived in the state, they would tell you that there was no way they would ever think that Oklahoma would have the cannabis market that it has today. Not only has Oklahoma reformed their cannabis laws, but they also have one of the most lenient medical cannabis programs in the United States.

In fact, it offers just about everything a medical cannabis patient could desire. The freedom to utilize cannabis to treat any ailment that you see fit, the freedom to grow your own medicine at home, and some rather lenient purchasing restrictions as well. Not to mention, the state is saturated with dispensaries, meaning there is always one not too far from home, and typically several choices for patients nearby!

Thanks to House Bill 3228, medical cannabis patients in the state of Oklahoma can also add the freedom and convenience of having cannabis delivered to their doorstep. The law will allow licensed dispensaries to deliver cannabis products to a patient’s private residence within a 10-mile radius. If no dispensaries are within 10 miles, patients can receive delivery from any dispensary within the same county.

That means for the first time ever, patients from prohibition states such as Texas, Tennessee, and Kansas could obtain a medical marijuana patient card and utilize it within the state of Oklahoma to legally consume and medicate with cannabinoid therapies. The temporary license would have the option of renewal as well. Previously if you were a medical cannabis patient in another state, you could file for a temporary license in Oklahoma for a fee. However, that license was only valid for 30 days.

The bill, if signed by the governor, would also remove the provision that non-cannabis patients must “state a valid medical condition” if caught in possession of cannabis in the state. Instead, any person in the state of Oklahoma caught in possession of cannabis without a medical cannabis card would instead receive a fine up to $400. They, however, would not face any jail time. Additionally, patient and caregiver records would be permitted from being “shared with any other state agency or political subdivision without a warrant issued by a court of competent jurisdiction,” should this bill receive the Governor’s signature. Congratulations to Oklahoma for not only listening to the will of its people but also for showing the United States what a truly comprehensive medical cannabis program looks like.

I am a transporter for medical cannabis. We cant deliver to private homes. They must have a license to recieve it. Which the medical catds are not that.