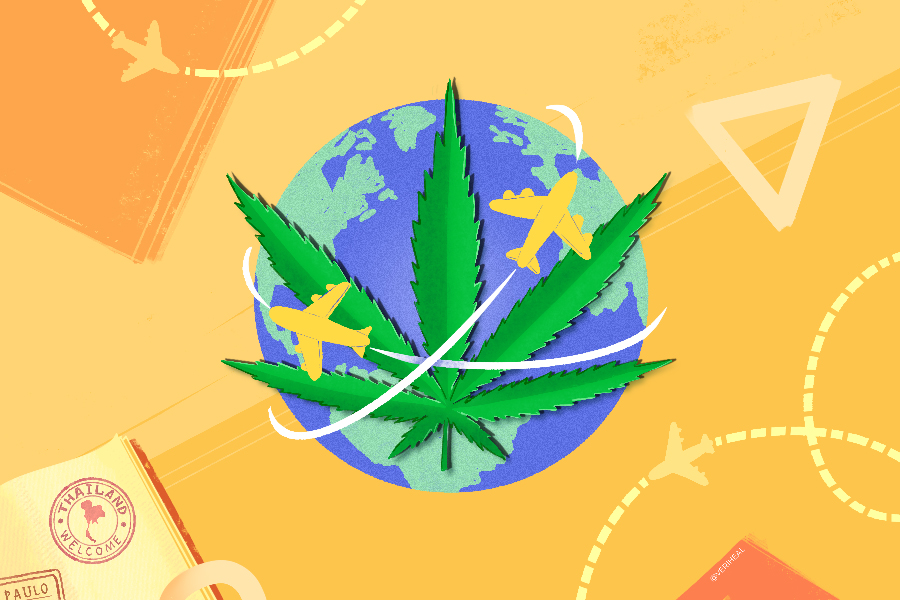 On June 9, an announcement published in the Royal Gazette confirmed that Thailand had become the first Southeast Asian country to decriminalize cannabis. The ruling meant that cannabis was erased from the category 5 narcotics list. This policy change legally allows Thailand’s cannabis industry to form.

Although the decriminalization of cannabis in Thailand is sure to have a positive impact on the Kingdom’s economy, there are some potential pitfalls that tourists and travelers ought to steer clear from. In fact, The Thai embassy in Seoul recently issued a warning regarding the transportation of cannabis products from Thailand to South Korea.

“Annoucement! Thais wanting to travel or stay in South Korean are warned not to carry cannabis, hemp or products containing these plants into the country. Violators could face punishment under South Korean law,” reads a statement published on the embassy’s Facebook page. The Seoul-based embassy is the latest in an ever-growing list of Thai consulates to issue such a warning.

What are the Repercussions of Entering South Korea with Cannabis from Thailand?

Although cannabis in Thailand is legal, the leafy plant remains an illicit substance in many nearby countries, including Indonesia, Cambodia, Japan, and Vietnam. Since cannabis is an illegal substance in South Korea, people who are caught in possession of cannabis-based products could be deported and blacklisted from entering the country in the future. There’s also the risk of facing a stint behind bars.

Anyone who is caught smuggling either cannabis or hemp from Thailand to South Korea could face five years in prison or, in the worst case scenario, life imprisonment. People who grow and/or sell the plant face a minimum of one year in jail, whereas possession carries an increased jail term of up to five years.

Thailand’s cannabis industry is the first of its kind in the region. Although many celebrated this victory both domestically and abroad, neighboring countries made it clear that hemp and cannabis-based products will not be tolerated within their borders. It’s not just the Thai embassy in Seoul that has issued a warning to cannabis-travelers from Thailand. On June 24, the Thai embassy in Japan informed Thais (and anyone traveling from Thailand) that they will be subject to severe penalties if they carry cannabis or cannabis-based products onto Japanese territory. The warning was issued via the embassy’s Facebook page.

Japan’s drug laws stipulate that possession of the plant or its derivatives (e.g. cannabinoid-based edibles or skincare products) carries a maximum jail term of seven years. Meanwhile, possession with the intent to sell is liable to a maximum of 10 years imprisonment and a fine up to ¥3 million. That’s equivalent to around USD $22,000. Just four days before the announcement, a similar warning was issued via the consulate-general in Ho Chi Minh City’s official Facebook page.

“Products containing cannabis and hemp are prohibited from being brought into Vietnam. If violations are detected, the penalty will be 5 million to 500 million Vietnamese dong and life imprisonment or the maximum penalty of death,” reads the announcement, dated June 20.

That announcement was followed by the Thai embassy in Jakarta, which also advised Thais via Facebook about the penalties associated with carrying cannabis or cannabis-based products into the country. People found guilty of doing so may be instructed to hand over 1 billion Indonesian rupiah (approximately USD $67,000). In more serious cases, cannabis convicts could be imprisoned from five years to life, or even face the death penalty.

Indonesia is one of the only countries in the world that still serves the death penalty on drug traffickers. On April 29, 2015, the two ringleaders of “the Bali Nine” were killed by firing squad for conspiring to smuggle 8.3 kg of heroin to Australia. Andrew Chan and Myuran Sukumaran were caught in Bali’s capital of Denpasar in April 2005 for the attempted illegal trafficking of heroin, which was valued at around A$4 million (USD $2.7 billion.)

Thailand’s Cannabis Industry is on a Steady Incline

As Thailand (and the rest of the world) slowly adjusts to life post-pandemic, efforts to rebuild the dilapidated economy are well underway. In places like Thailand that are reliant on tourism to rake in the cash, finances have been hit hard. The good news is that cannabis sales revenue could act as a financial safety net.

During 2020, when the COVID-19 outbreak initially kicked off, the country’s gross domestic product (GDP) sank 6%. This was mainly because of coronavirus restrictions taking their toll on tourism-focused employment opportunities and businesses. Before the pandemic, the tourism sector made up 20% of Thailand’s employment and one fifth of GDP.

Thailand’s cannabis industry is forecast to reach a valuation of USD$661 million (21 billion Thai baht) by the year 2024. This is based on a report by cannabis research firm Prohibition Partners. Included in this projection are forecasts for the Southeast Asian country’s medical cannabis market ($237 million) and the country’s combined recreational and medical cannabis market ($661 million).

After a decriminalization law was enacted, Thailand’s Public Health Ministry agreed in January to eliminate both cannabis and hemp from its illegal narcotics category. Moving forwards, cannabis cultivation and commerce will be legalized countrywide. The groundbreaking law change is likely to attract heaps more tourists in the coming years.

Even before the plant was decriminalized, tourists could easily obtain something to smoke from many of the local cafes scattered around islands like Koh Phi Phi, Koh Chang, and Phuket. Thailand is also known for being a magic mushroom hotspot, with most of the country’s potent shakes being produced with fungi grown in elephant poop.