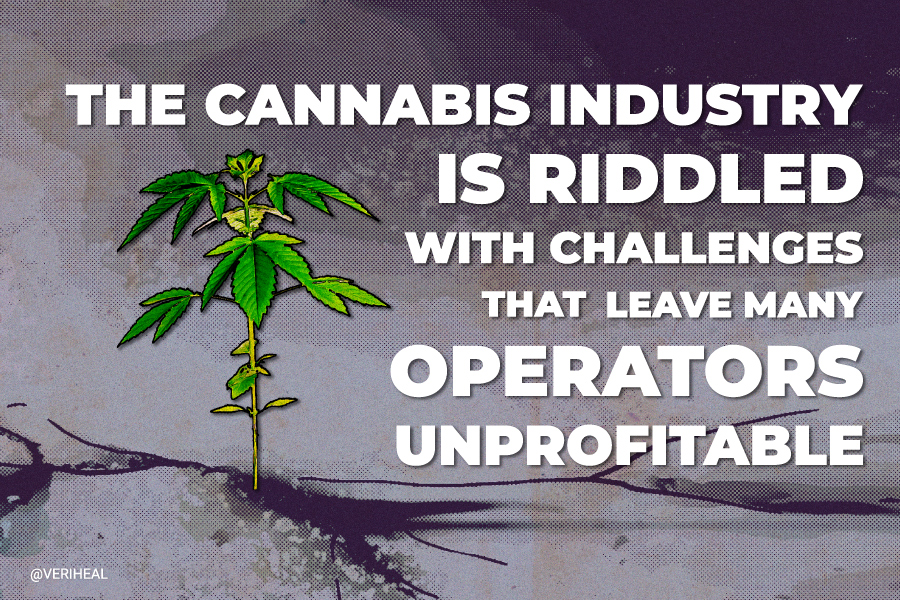 American entrepreneurs are jumping on the cannabis bandwagon left and right as the American cannabis industry reaches new heights. But many are quickly realizing that this blossoming sector still has some major issues to address.

According to the North Bay Business Journal (NBBJ), a recent survey revealed that 37% of American cannabis operators are not profitable—a finding that contradicts the widespread belief that the industry is a jackpot for business owners. CSI Market explains that the legal cannabis industry’s gross profit grew by 301.85% in the fourth quarter of 2021, yet many feel like they’re in the business “where it’s the toughest and the profit is the hardest to get.”

No Industry for Small Players

The National Cannabis Industry Association conducted a survey of 396 American cannabis operators and found that conditions were the worst in the Golden State, where only 24% of the respondents said their businesses are profitable and only 20% feel like their businesses are breaking even. Mike Benziger of Glentucky Farms stated that the cannabis industry became tough when it “became an industry driven on price rather than quality.”

Benziger expressed concern for those in the industry who do not have prior wealth to assist them with staying afloat and is unsure how most growers are able to make ends meet, let alone make a profit. He goes on to explain that big players—those with prior wealth or lucrative investors—are able to take “big hits” but that “the only way small growers will be able to survive is if they already have money or can make sales on site”—however, the latter is illegal.

As things stand now, small growers and other small cannabis businesses will not survive in the current cannabis industry. In order to provide some insight into why these smaller businesses may be struggling, the NBBJ proposed the following list of challenges:

Beau Whitney from Whitney Economics told the NBBJ that “this is no surprise” and that “the narrative out there is that everyone is swimming in cash because of cannabis. But for many, unless you have $2.5- to $3- million, you’re not able to cover a loan or rent or health care.”

Considering the cost to get into and succeed in the cannabis industry, as well as the “overzealous compliance rules,” many legal cannabis operators have stated that they are experiencing “prohibition through legalization.” The notion refers to the idea that while legalization has created business opportunities, it has created so many regulation-based barriers that businesses are struggling to succeed.

The NBBJ explains that cannabis businesses and operations that have licenses to operate can only do so with “the blessing of local government” that sets its own rules. Additionally, many business owners in the cannabis industry are also suffering from consequences related to the “lack of retail space to sell the plant…”

The illicit and legal markets generate a combined $100 billion in national sales, with the legal industry being forecast to generate $45 billion by 2025. The NBBJ explains that the industry has over 400,000 workers within the 39 states where medical use is allowed. Despite the impressive numbers, businesses that are not doing well are bound to leave, which will cause local economies to suffer.

Matt Mayberry from Novato-based Trym told NBBJ that “companies are going out of business” as “conditions are very difficult on small growers operating on shoestring budgets.” Mayberry believes that the only thing that can help now is for federal legalization to become a reality, which would lead to lower taxes and fewer—or less overzealous—rules and regulations.

The survey asked respondents about their confidence level for the next year and found that over 12% of testing facility operators said they “expect to be outta here.” The loss of testing facilities will have an adverse effect on the industry, as they are valuable in assuring consumers of the quality and effects of a product. Adam Mintz, Oakland cannabis industry consultant, explained that the start-up costs are “enormous” and that “the way to survive is they have to do a volume of tests. It’s a lose-lose situation for an entrepreneur every time.”

Not only is it costly to get into the cannabis industry, but cannabis operators are also swimming in paperwork to assure their local governments that they are operating within the regulations. Tiffany Devitt from CannaCraft estimated that her company prints around 4 million pages a year to demonstrate that CannaCraft is meeting the California government’s regulations, saying that this is “environmentally ridiculous.”

Devitt explains that she is “guardedly optimistic,” as it “seems like they’re listening more closely than they did in the past” in reference to government officials and authorities. However, it is easier for a giant like CannaCraft to remain positive while smaller businesses are struggling just to stay in the game.

According to Business Insider, it can cost up to $1 million in capital just to obtain a license, in addition to “a lot of red tape that just doesn’t make sense.” Regulations layer on the costs of starting a cannabis business, and the most challenging part may be the fact that there are varying regulations from state to state since they have “free rein on how to regulate it.”

To demonstrate these hefty fees, Insider explains that a license to grow in California can cost almost $80,000 on top of an $8,000 application fee, which is much more than a liquor license in the same state (just over $15,000). Jeannette, one of the interviewees, explained that in addition to those fees, the state may require you to have liquid capital of up to $250,000, but very few people actually have that kind of money.

One thing is certain: Some critical changes in the cannabis industry are desperately needed. Many cannabis advocates have worked diligently to ensure that the industry doesn’t follow the same path as industries like Big Tobacco that consist of a handful of giant players, but prospects aren’t looking good at the moment. Smaller players—particularly those from communities harmed by the war on drugs—should have just as much of a shot at succeeding in this industry as operators with deep pockets.